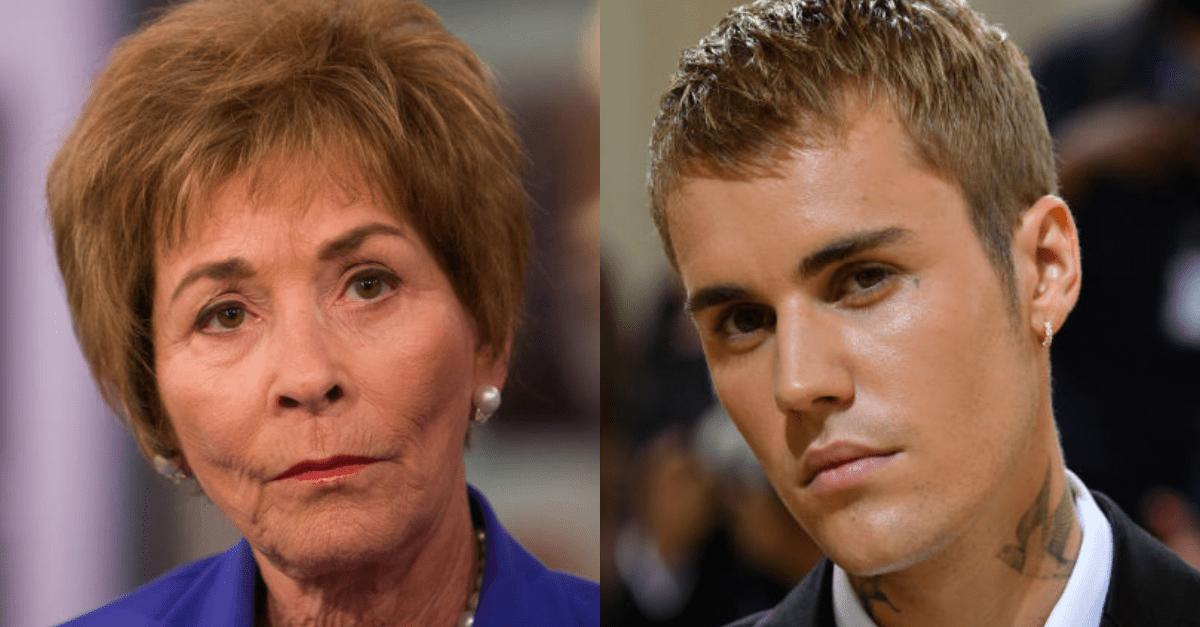 Judge Judy has explained the lengths her former neighbor, Justin Bieber, would go to avoid her.

The TV personality even claimed the singer was “scared to death” of her.

Scroll down for the full story!

People have been fans of Bieber since he was just a teen.

Bieber was discovered at the tender age of thirteen. The then-untrained Canadian singer put down his singing roots on YouTube, uploading covers to the popular platform.

He came from very humble beginnings.

Born on March 1, 1994, in Stratford, Ontario, Canada, to a single mother, Bieber was completely unknown on the music scene until he started uploading singing covers to his YouTube channel.

His videos gained the attention of talent manager, Scooter Braun.

Clearly impressed by the teen’s vocal potential, Braun got him signed to RBMG Records in 2008.

Within 2 years, Bieber went from an unknown, ordinary teen, to a global superstar.

His big-time record deal with Usher meant that he was skyrocketed to stardom at record speed — releasing his debut album, My World, in 2009.

And, of course, we all know this song…

Bieber broke into the Billboard Top 10 in early 2010 with his hit single ‘Baby’, which also featured rapper, Ludacris. Not only did the single earn him huge recognition musically, but it also cemented him as a teen heartthrob for his young, female fan base.

His chart-topping success is groundbreaking.

According to Biography, the star went on to become the first solo artist to have 4 singles enter the Top 40 before the release of a debut album.

Musically, there seems to have been no stopping the star.

For example, his 2017 collaboration with Luis Fonsi, ‘Despacito’, broke the all-time record for the most consecutive weeks at the number 1 spot on the Top 100.

And, let’s be honest, he’s certainly got the glowing paycheck to show for it.

Now twenty-eight years old, thanks to the likes of his record-breaking music sales, merchandise, and sell-out tours, the star has an eye-watering estimated net worth of $285 million as of 2022.

But we all know that money doesn’t bring you happiness.

Bieber is a living example of that; you may have millions in the bank, but that doesn’t mean life will be plain sailing. And, in his case, his career has been far from plain sailing…

After being propelled to fame at such a young age, the stardom certainly took its toll on the singer.

His career has been rife with controversy, offensive behavior, brushes with the law, and an all-around “going off the rails” attitude.

It’s a fate that many of us could see coming.

Several stars who have earned fame at a young age have gone on to stray from their former selves. Think Miley Cyrus, Amanda Bynes, Macaulay Culkin, and Lindsay Lohan, for example.

And Bieber is definitely no exception.

It’s no secret that the star went a bit off the rails, and has a string of controversial behavior to show for it. Remember the time he spat on fans?

Well, the incident got him labeled a “pop brat” and saw him gain a hell of a lot of negative press, understandably.

The star has even had a brush with the law.

He was first arrested in 2014 at Miami Beach, on suspicion of driving under the influence, resisting arrest without violence, and driving with an expired license. You’ll probably recognize the infamous mugshot that instantly went viral following the news.

Sadly, the star’s musical success is tainted by a backlog of controversial incidents.

From canceling his world tour and his eyebrow-raising Prince tribute, to allegedly egging his neighbor’s house, he certainly hasn’t fallen short of bad press.

The star reflected on his life with celebrity status.

The singer explained that his life in the spotlight left him feeling overwhelmed. Posting a text image, the singer wrote: “It’s hard to get out of bed in the morning with the right attitude when you are overwhelmed with your life, your past, job, responsibilities, emotions, family, finances, relationships.”

It became a vicious cycle.

And his mental health plummeted to rock bottom.

The singer admitted that he would get to the point where he didn’t even want to live anymore.

“A cycle of feeling disappointment after disappointment. Sometimes it can even get to the point where you don’t even want to live anymore.” He continued: “Where you feel like it’s never going to change… I can fully sympathize with you. I could not change my mindset. I am fortunate to have people in life that continue to encourage me to keep going.”

The pressures of being a child star were too much.

“You see, I have a lot of money, clothes, cars, accolades, achievements, awards, and I was still unfulfilled. “Have you noticed the statistics of child stars and the outcome of their life? There’s an insane pressure and responsibility put on a child whose brain, emotions, frontal lobes [decision making] aren’t developed yet,” he explained.

Although most teens rebel at some point, according to the singer, adding in stardom does something “unexplainable.”

“No rationality, defiant, rebellious, things all of us have to go through. But when you add the pressure of stardom it does something to you that is quite unexplainable.”

He then went on to reflect on his childhood. “You see, I didn’t grow up in a stable home, my parents were separated with no money, still young and rebellious as well.”

The star explained he massively struggled throughout his teenage years.

Unsurprisingly, after becoming a teen sensation overnight, the effect was detrimental to the star’s mental health.

“As my talent progressed and I became ultra-successful it happened within a strand of two years. My whole world was flipped on its head. I went from a 13-year-old boy from a small town to being praised left and right by the world with millions saying how much they loved me and how great I was.”

He added: “Humility comes with age. You hear these things enough as a young boy and you start actually believing it.”

Bieber then made a shocking drug abuse confession.

He found the ups and downs of performing difficult to cope with and did what many other touring bands do… drugs.

“You notice a lot of touring bands and people end up having a phase of drug abuse and I believe it is due to not being able to manage the huge ups and downs that come with being an entertainer.”

“I started doing pretty heavy drugs at 19 and abused all of my relationships. I became resentful, disrespectful to women, and angry. “I became distance to everyone who loved me and I was hiding behind a shell of a person that I had become. I felt like I could never turn it around.”

He said that the damage he caused to his own reputation has taken years to come back from.

“It has taken me years to bounce back from all of these terrible decisions, fix broken relationships, and change relationship habits.”

And recently, things seemed to come to a head once more.

Bieber canceled his Justice World Promotion tour, and said: “The exhaustion overtook me and I realize that I need to make my health the priority right now.”

A move that was echoed by his good friend Shawn Mendes.

Who canceled his world tour back in July, and said: “It has become more clear that I need to take the time I’ve never taken personally, to ground myself and come back stronger.”

And it seems the pair have both been very focused on themselves.

Because they were spotted attending church together!

The pair were seen at Churchome in Beverly Hills, as per TMZ.

We hope the 2 are feeling much better soon!

More recently, Judge Judy, who lived next to the pop star in 2017, has revealed how Bieber used to be scared of her.

This was because she had slammed him for his teen years.

In 2014 she called him a fool after he was arrested for DUI.

“He’s scared to death of me,” she told Access Hollywood.

“There was a period of time before he grew up — when he was foolish, and doing foolish things.”

She also explained the extreme length he would go to steer clear of her.

Judy recalled how one time his security team would keep tabs on her schedule so he could avoid her at all costs.

“I must have said something about it, and then, I understood that he was paying the front door people to let them know when I was there, coming and going, so he wouldn’t have to bump into me,” she said.

What do you think?

See also  What is bodybuilder Jay Cutler's net worth?