Early in Nope, Jordan Peele’s thrilling new horror movie, a woman named Emerald Haywood (Keke Palmer) tells a story. She and her brother OJ (Daniel Kaluuya) are horse handlers and ranch owners by trade, who parlay their animal wrangling skills on TV and film shoots, which is where we meet them today. But the ranch is a family business, passed down to them by their father, the late Otis Haywood (Keith David), and by his father before him. Go back far enough in their family line and you’ll meet the man Emerald tells us about in her story: the Black jockey captured in Eadweard Muybridge’s 1878 photographs of a galloping horse, which, strung to together, became one of the earliest known examples of stop-motion photography — essentially, of movies. We know the name of the horse: Sallie Gardner. We know the name of the owner of the horse: Leland Stanford. What we don’t know is the name of the man astride the horse. This is the story Emerald tells us — before telling us about her side hustles and where we can find her on social media. A girl’s gotta eat.

What’s any of this got to do with aliens? In Peele’s movie, everything. Nope is in large part a movie about what cannot be tamed, and spectacle — our dire, damning hunger for it — is at the top of that list. (Aliens — animals, broadly — make for a very close second.) The point of opening a movie like this with a reminder about the birth of movies isn’t just to school us on where Black people fit into that history, though that’s obviously very much to the point; even the set decor of Nope underscores the notion, down to a poster in the Haywoods’ ranch for the classic, too-little-known Black western Buck and the Preacher — a reminder that the history of movies is still in need of all kinds of intervention.

But Peele, a director who’s made a name for himself by infusing horror with healthy spoonfuls of Black common sense and a love of movies, has even more ideas up his sleeve. A lesson of Muybridge’s work was that the camera, stopping time, could see things that the human eye could not. Images are evidence. You want proof of how a horse gallops, of the instant when none of its hooves are touching the ground? Only a photo can convince you. You want proof of UFOs? You want the first stakes in that evidence before it’s ripped out of your hands, destined to become the property of a curious, shameless, hungry public? Well, you better hope those aliens are in your backyard — which, as it turns out for Emerald and OJ, they are.

See also  Did Eminem Waste Part Of His Incredible Net Worth On A Random NFT?

Maybe the siblings should consider themselves lucky. The day that we see them on a movie set with one of their horses, named Lucky, is the same day that the former child star Ricky Park (Steven Yeun) offers to buy Lucky — in fact, to buy their entire, family-owned ranch — off of their hands. When that day becomes night, the Haywoods learn why. There’s something in the sky: something making their horses go wild and disappear into the night. If you’ve seen horror movies, you know the signs. A cloud that doesn’t move by day. Brown-outs and strange noises at night. They install video cameras around their remote, lonely property, tucked away in the northern California hills, and on the roof of their house. But the suspense is not in the question of why. Emerald asks her brother early on if he thinks there’s a spaceship hovering over their front yard. All he has to do is nod yep. 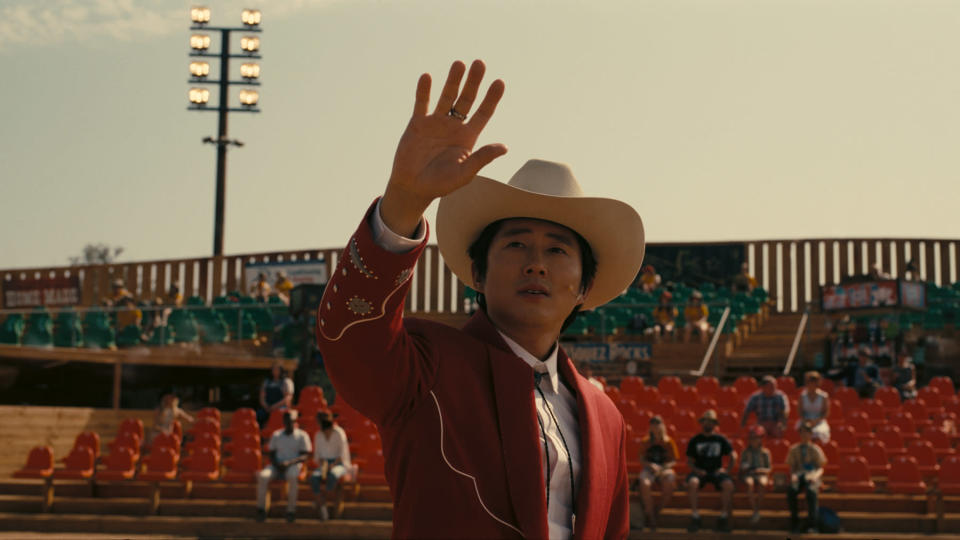 Nope is not the kind of movie to obscure what it’s “about” — that’s one of the most satisfying things about it. It’s a little like the M. Night Shyamalan classic Signs in that way. That movie knew that we know the signs. It doesn’t build toward a climactic reveal of the UFOs at its center: It reveals them halfway through, in — what else? — video footage taken from on the ground, not unlike the kind that the Haywoods soon want to create. The pleasure of Shyamalan’s movie isn’t in seeing where the signs lead, which is toward the inevitable, but rather in watching its characters try to make sense of those signs, try to integrate what they’re seeing into their understanding of the world, to the point of these mysteries inspiring a crisis of faith.

Nope is similar, only it’s about the crisis of looking. What do you do when you hear tell of some awful, incredible, little-known event — a long-ago murder or freak accident, the kind of deep cut that’s only barely persisted in the cultural memory? Many of us cannot help but look it up. What’s the first thing you do when some foreign object in the sky flits over your head, just out of sight? You look up.

Peele’s ingenious idea is to use that instinct against us. It’s more than a matter of unidentified flying objects. It’s a matter of lore, of violence — of horror, of course. Peele has rightly been noticed for his profusion of movie references, his almost scholarly, but in no way didactic or merely referential, skill at reminding us of the bedrocks of the genre. Nope is another masterclass in this trend in his work — just look at his approach to the mere idea of the UFO. The flying saucer myth is alive and well in this movie. But it wouldn’t be Peele if that trope went unrevised.

Peele’s career as a director has been overly defined by the term “social thriller.” Less remarked-upon, but equally important, is his unabashed investment in symbolism, the kind of high-concept thinking that can push a movie along the axis of its ideas, distinct from its emotional logic or its genre satisfaction. At its best, as in Get Out, Peele merges that impulse with his well-honed knowledge of tropes and his incredible sense of humor to create something as entertaining as it is thought-provoking, a movie that can end with a classic, villainous infodump without feeling overwhelmed and deflated by explanation. Us, his solid second thriller, falls prey to the latter: the concept and action were almost at odds with each other, resulting in a movie with too many symbols and too strong of a need to talk us through them, whereas its action was already doing enough.

Nope is like the cosmically perfect stepchild of the two. Peele brings the concept and the beautifully achieved terror together — including a sequence halfway through the movie, beginning when a live show goes wrong and ending with a sickening twist on a house of horrors. It’s segment of the movie that uses every resource available to threaten the senses, from the clashing thuds of heavy rain to one of the most eerie examples of a movie scream that I think I’ve heard. This is a movie that knows the power of images. It has learned, from the greats of the genre, that what we fear most is what can’t be seen, what’s merely implied. All the camera has to do is trace an arc across the sky and you’ll believe something is there. (Cinematographer Hoyte van Hoytema, who shot Dunkirk — an IMAX movie, like this one — was a perfect choice for this project, able to carve daring, evocative shapes onto the screen through what feel like the simplest means.)

None of it would work without people. Palmer and Kaluuya could not be better. Palmer is down in every way, as stylish and unflappable as Samuel L. Jackson or Jada Pinkett Smith, with a taste for stoner mayhem and, when the movie calls for it, action-movie know-how. She’s who you’d want to be in a movie like this. But you’re not Keke Palmer — sorry. She makes for a fun pair with Brandon Perea, who plays a tech-store clerk in name but is really this movie’s version of a video-store clerk: in on it, knowledgeable, reluctantly down, and ultimately in over his head.

Kaluuya, meanwhile, offers us something else. His OJ is a man of few words who seems sterner than he is, though not out of shyness. It takes a while to realize the archetype he’s drawing from here, one that belongs to another genre — the genre that the character Antlers Holst, played by Michael Wincott, with his Eastwood growl, ought to remind you of.

Nope may be a horror movie in which the most damning thing you can do is to look — but the key to the movie’s conceit is in the irony in wanting to be seen: in which the Black descendants of a man whose name has been lost to movie history find themselves eager to be handed the reins of their own story and given a chance to tell it themselves, for once. One of the terms that Emerald uses in describing her great ancestor, that Black jockey atop Leland Stanford’s horse, is “action hero.” She claims him as one of the first. And because of the horse, she goes further: He’s a Western star. Midway through, Nope dials back on the heightened frights of its horror to become something else. It becomes a story of invasion — not just of the extraterrestrial kind, but of the land-born, territorially offensive kind. It becomes a movie about protecting the homestead from the most invasive species of all: other people. It becomes a Western.

What that means for Nope should be left to the movie to reveal. But it’s not the kind of thing that can be reduced to a plot point. It’s why, as you watch, that alien life form in the sky may start to resemble something a little familiar, a movie symbol born of these same landscapes, a totem of movie heroism. Then, like the movie itself, it becomes something else: an undulating, mocking paean to spectacle. You can’t help but look. But here, looks kill.

Halle Bailey’s Boyfriend Responds to Amanda Seales’ Suggestion That She Should Break Up With...

What role did Lisa Banes play on ‘The Orville’? Hulu show...