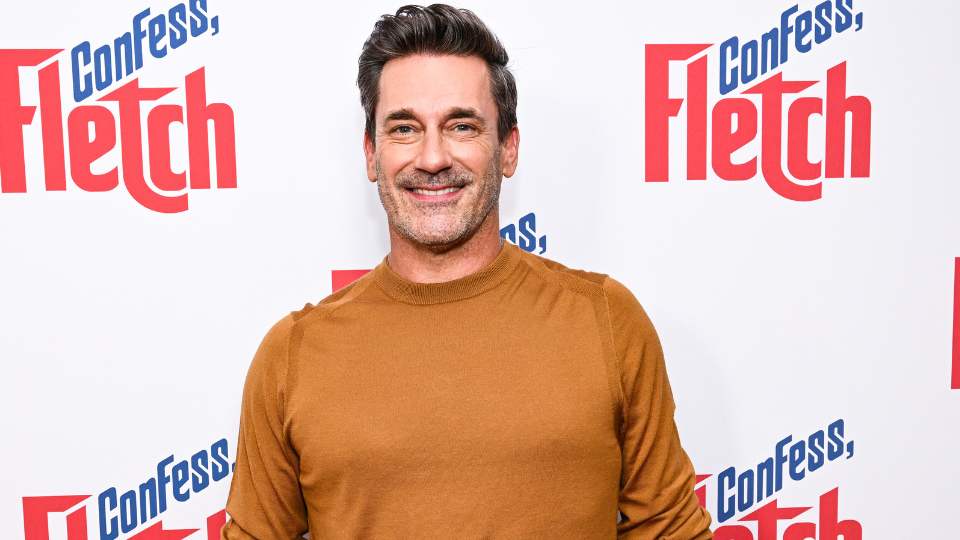 Emmy winner Jon Hamm seems like one of the good guys in Hollywood. In 2022, he gave up 60 percent of his salary to finance an extra three days of filming for the indie comedy Confess, Fletch which must mean he’s in a pretty secure position to make that sort of investment. Which leads fans to wonder what Jon Hamm’s net worth is and how much he made while filming Mad Men as Don Draper, one of his most legendary roles.

Hamm has spent the last 25 years in the entertainment industry. His first on-screen appearance was as “Gorgeous Guy at the Bar” in an episode of Ally McBeal and from there, he worked pretty consistently in small roles over the next 10 years; a spot on the third season of Gilmore Girls, another in season seven of Buffy. But it wasn’t until 2007 when the world really started to get to know the name, Jon Hamm. He made his debut as the smooth-talking, morally questionable alpha-male Don Draper in Mad Men in October 2007 and the show was an instant hit. Not only was it well-received by critics but was nominated for 15 Emmys and won six, including Outstanding Drama Series. Hamm was nominated for Outstanding Lead Actor in a Drama series, but he lost to Bryan Cranston for his role in Breaking Bad. Ooff, tough competition. More than 20 years since his debut role, how much is Jon Hamm’s net worth now?

What is Jon Hamm’s net worth?

What is Jon Hamm’s net worth? Around $45 million, according to Celebrity Net Worth. The actor can owe much of that wealth to his work on Mad Men, for which he reportedly received up to $275,000 per episode, totaling $4 million per season. He worked hard to get the part, too. In an interview with TV Week in 2017, Hamm explained the arduous audition process. “I auditioned about seven or eight times and I was just thinking, ‘God, at this point, I’ve pretty much read every single scene in the pilot to somebody. What do I have to do?’” He got the part, thanks to his would-be co-star Christina Hendricks who told him the good news. Filming on the pilot (because those were still a thing back then) on April 20, 2006. The episode opened with a view of the back of Don Draper’s head and that image would go on to be somewhat of an iconic image in the show. Simultaneously filming Mad Men, Hamm would star in a selection of film roles that would prove to be lucrative. Notably, he lent his voice to the character of Herb Overkill in Minions and that was a huge box office hit with earnings of over $1 billion. Most actors get a flat rate of box office earnings, sometimes up to 20 percent, but we don’t know how much Hamm would have negotiated for Minions.

It’s not just screen or stage work where actors earn their millions, however, and much like top professional athletes, movie or TV stars can earn a lucrative living doing commercials. Hamm has been doing voiceover work for the luxury German car company, Mercedes-Benz, since 2010. Celebrity Net Worth estimates Hamm would have signed a long-term contract as a spokesperson for the brand, and given comparable actor’s known endorsement contracts, he’s likely operating on a five-year $15 to 25 million deal with Mercedes, which equates to around $3-5 million per year. Fees for these sorts of things are usually paid upfront, however. He’s also done work for H&R Block tax services and promoted AppleTV+ during the NFL playoffs. He enjoys being a real-life ad man like his legendary character Don Draper, telling The Things in a 2022 interview that he enjoys the challenge of commercial storytelling and is quite happy not being a “24/7” movie star like Tom Cruise. “It’s a challenge to tell a story in a 30-second spot,” Hamm said. “It’s a challenge to get a message across in a one-minute spot or a 15-second ad or what have you. And there are so many creative ways to do that nowadays.” While a lot of famous faces used commercials as a stepping point to break into film or TV, Hamm said he finds a lot of enjoyment in the creativity as well as noting there’s a lot more respect for advertising these days. “It’s not lost on me that some of our greatest film directors got their start in the commercial space, like Ridley Scott and David Fincher,” he said. “The old school stigma of doing commercials has rightfully washed away.’’

Personally, Hamm and his partner of 18 years, Jennifer Westfeldt, broke up in 2015. In 2013, they’d purchased a house together: a 1,000-square-foot, two-bedroom penthouse with a terrace on the Upper West Side of Manhattan for $2.45 million, just a block away from Central Park. But after they split, the penthouse underwent extensive renovations before it was rented out for almost $15,000 per month. Two years after their marriage breakdown, Hamm purchased a four-bedroom, freshly renovated home in L.A.’s Los Feliz for a bit below $3.4 million in 2017.

In 2022, news broke that Hamm had given up 60 percent of his salary on the indie comedy Confess, Fletch to film an extra three days of footage. The film had a shoestring budget of $20 million thanks in part to Hamm’s generosity, compared to the average cost of making a movie which is around $65 million. The film’s director Greg Mottola confirmed the news to Uproxx, saying Hamm “gave back 60 percent of his salary to the budget” to finish filming the Paramount/Miramax feature. “I gave back some of my salary, not as much as Jon because he’s richer than me and I’ve got three kids,” Mottola said. “And we bought three more days of shooting. We got it up to 30 days in Boston and one day in Rome. And we said, fuck it, we’re insane, we’re dumb. We’re going to make this movie.” The film Confess, Fletch is based on Gregory Mcdonald’s 1976 novel of the same name.

See also  "Magic Johnson offered $1 Million to get LeBron James in the dunk contest": When the King responded to the Lakers legend throwing down the gauntlet in the All-Star game

Ruben Randall - October 30, 2022 0
Actor
For a man juggling multiple roles, Arnold Schwarzenegger prefers detachment from technology. The ‘Terminator’ star has won many awards and made many friends...