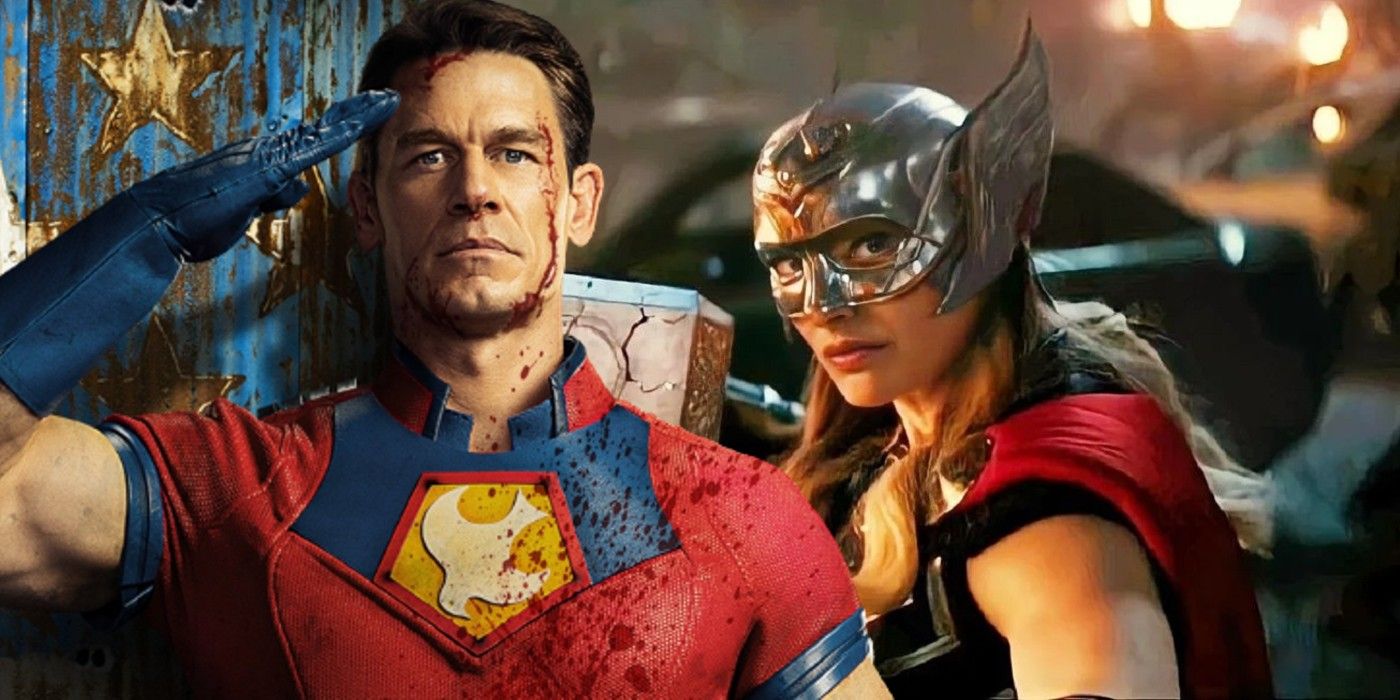 John Cena responds to the Thor: Love and Thunder trailer’s popularity with a joke about Peacemaker and Jane Foster’s similar chrome helmets.

John Cena reacts to the popularity of Thor: Love and Thunder‘s trailer with a Peacemaker joke. The WWE wrestler-turned-actor first starred as the DC character in James Gunn’s 2021 film The Suicide Squad as one of the many misfits part of Task Force X sent to Corto Maltese to destroy Project Starfish. Though Cena’s chrome-domed vigilante is seemingly killed by Bloodsport during the mission, a post-credits scene revealed he was still alive, directly setting up Peacemaker’s HBO Max spinoff in which he is tasked with a new mission dubbed Project Butterfly. The Peacemaker series turned out to be a hit, quickly receiving a season 2 renewal.

Earlier this week, Marvel Studios finally unveiled the trailer for Thor: Love and Thunder. The biggest takeaways from the trailer were the return of Chris Hemsworth as Thor alongside the Guardians of the Galaxy. Though Christian Bale’s villain Gorr the God Butcher was not glimpsed, Natalie Portman’s Jane Foster was shown wielding Mjolnir as the Mighty Thor during the trailer’s final moments. Like many MCU trailers, Love and Thunder’s was released to much fanfare, racking up over 200 million views in its first 24 hours, the fourth-most watched trailer within that timeframe.

Now, John Cena is reacting to Love and Thunder’s trailer with a Peacemaker reference. In a tweet, the actor playfully suggests that the trailer’s popularity may be owed to the “slick looking chrome helmet” that Jane Foster is seen wearing as the Mighty Thor, which, now that Cena has pointed it out, is slightly reminiscent of Peacemaker’s own reflective headpiece. See his post below:

See also  Worst Bachelor Leads In The History Of The Show

Gunn, the mind behind Guardians of the Galaxy, The Suicide Squad, and the Peacemaker spinoff, replied to Cena’s post and agreed with him, writing “True, true. Very observant, John.” In his post, Cena also joked about a potential DC and Marvel crossover between Peacemaker and Jane Foster’s Mighty Thor. Though a “crossover chrome helmet showdown” would certainly be something to see, Cena better be careful what he wishes for, as his superpower-less Peacemaker wouldn’t stand a chance against the Mjolnir-wielding goddess that is the Mighty Thor.

Gunn’s reply is notable considering how the Guardians of the Galaxy, who the director elevated to immense popularity with his 2014 and 2017 MCU films, play a prominent role in the Love and Thunder trailer. Though Cena hilariously attributes its popularity to a minor similarity with his DC character, Peacemaker. In fact, Gunn even acted as a consultant to writer/director Taika Waititi on Thor: Love and Thunder. The film is due out this summer on July 8.

Next: Why Thor: Love And Thunder Is The Most Exciting MCU Movie Of 2022

In Alaska, the Race to Succeed Don Young Is Raucous and Crowded

Ruben Randall - February 3, 2022 0
Celebrity
You have viewed over 50 articles in the last 12 months.Keep Olympic News FreeSupport insidethegames.biz for as little as £10For nearly 15 years...

For Elvis Mitchell, Critic Turned Filmmaker, a Chance to Show and...