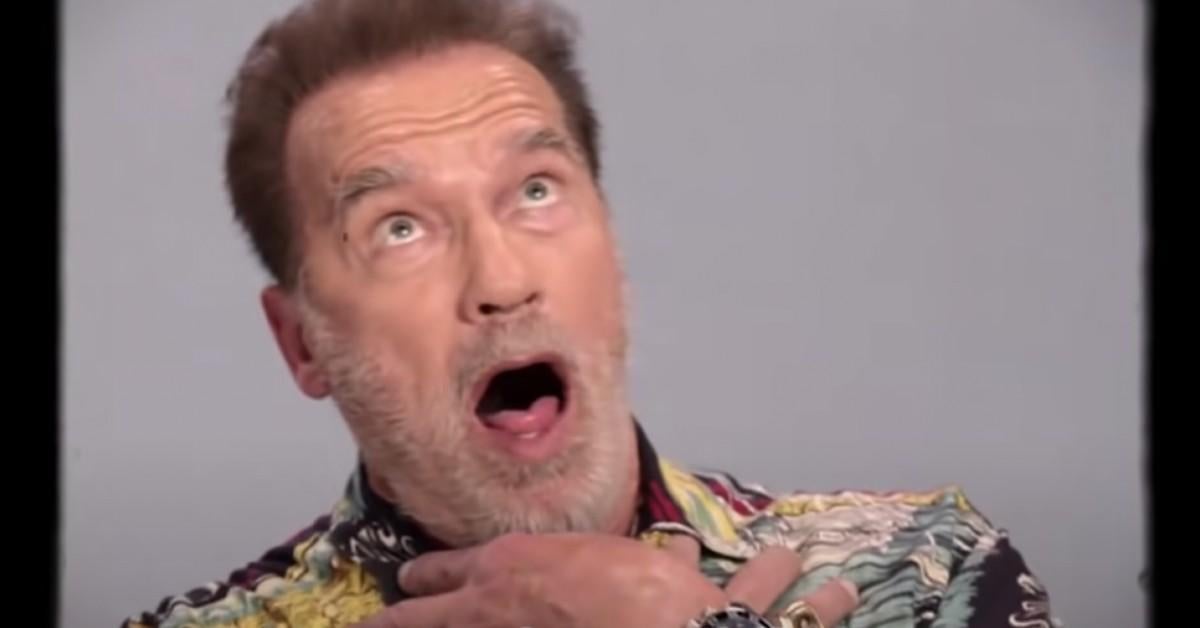 Arnold Schwarzenegger is one of the biggest names in Hollywood and he recently took the spotlight during a Super Bowl ad that saw him tackling a role he was born to play: Zeus. Now, the iconic star has teamed up with late-night host Jimmy Kimmel to teach viewers an important lesson that could save a life.

“Jimmy teamed up with our former Governor Arnold Schwarzenegger to teach their fellow citizens how to properly save a person from choking. Pay attention, because this could literally save your life,” Jimmy Kimmel Live shared on YouTube. The video shows Kimmel explaining the Heimlich maneuver before getting distracted by social media all while Schwarzenegger hilariously chokes on what is revealed to be a dumbbell. You can check out the cute video below:

As for Schwarzenegger’s career, fans have been waiting for the actor to begin production on the long-awaited Twins sequel, Triplets. It’s been over 30 years since Ivan Reitman directed Schwarzenegger and Danny DeVito in Twins, the fun-loving comedy that saw the very-different looking stars playing brothers. For many years, there have been talks of a sequel, which would reunite Schwarzenegger and DeVito alongside a third unlikely brother. It was announced last year that the movie was officially in the works with Reitman returning to direct and Tracy Morgan signed on as the third brother. Sadly, Reitman passed away this month, so there’s been no word on if they plan to continue with the production. Last week, Schwarzenegger took to social media to pay tribute to Reitman, who he also worked with on Kindergarten Cop and Junior.

“Ivan Reitman is a legend. In Hollywood, he was bigger than life. He was comedy royalty,” Schwarzenegger wrote. “In life, he was a mensch – a wonderful father and husband, a fantastic friend, a great human being. He was kind, he was generous, he was smart as hell, and he was always there for you. I am devastated, and my thoughts are with the Reitman family.”

“If you knew him, Ivan had a way of making himself a part of your story, and he certainly wrote a chunk of mine,” Schwarzenegger added. “I’ll always be grateful that he took a chance on this Austrian action-hero in a comedy during a time when the studios just wanted me to focus on finding new ways to kill bad guys, blow things up, and show off some muscles. I knew I could make it in comedy, but I needed someone else to know it to make it a reality. That’s why Ivan was a great director and friend: he could see something in you that other people didn’t, and he could help you show the rest of the world.”

He added of the upcoming Triplets, “Making Twins, Junior, and Kindergarten Cop with Ivan was heaven for me. Spending the last few years working with him on Triplets, and once again seeing his passion and genius up close, was a joy. Just last week, I was talking about how excited I was to be on set again with Ivan this fall. I can’t believe I won’t work with him again or hang out with him again or just schmooze about life again. But I also know that Ivan isn’t gone, he’s still with us. He’s here, in so many pages of my story. And if you were ever lucky enough to meet him, or just experienced his work, he’s a part of your story, too.”

Reitman recently produced Ghostbusters: Afterlife, which was directed by his son, Jason Reitman.