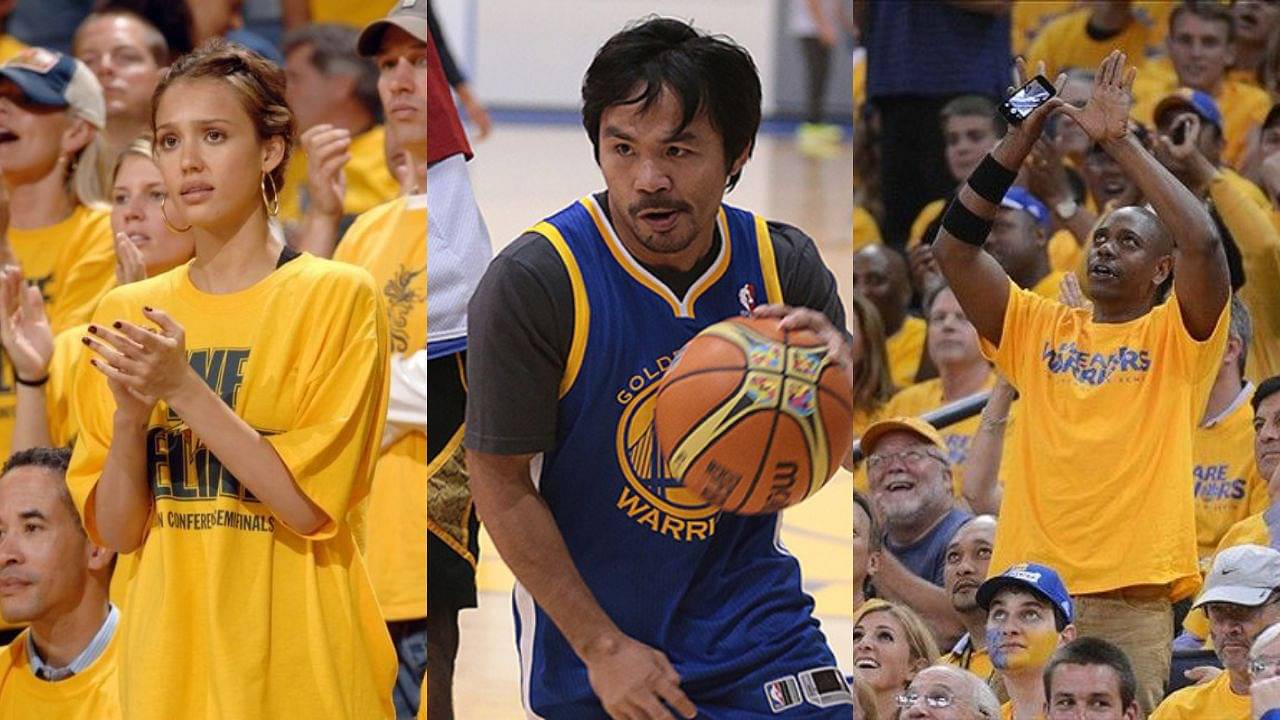 The Golden State Warriors will have some known faces rooting for it to win the championship this season.

With a reported estimation of $5.6B, the Warriors are ranked as the second most valuable franchise in the NBA after the New York Knicks. The Bay Area franchise has surpassed the iconic LA Lakers. Another title in the bag, and the Warriors could gain the status of a cult franchise.

Having revolutionalized the game, Dub Nation earned its global recognition via Stephen Curry and co. In what many think, the Warriors MVP is the face of the NBA post-LeBron James. While the current generation may not know, the Warriors had laid the foundation of its fan culture before Curry arrived.

The advent of the “We Believe” era marked the beginning of something special to come in the next decade. The 2007 playoffs will hold a special place in the Warriors franchise history when the 8th-seeded Dubs beat the 1st-seeded Dallas Mavericks in the first round.

Also read: “If Game 6 Klay doesn’t show up soon, Celtics would win the Championship!”: CJ McCollum points out Klay Thompson is vital to Warriors’ success in the NBA Finals

The last decade has witnessed Golden State become one of the most established franchises in All American sports. The California team has some of the biggest celebrities as its supporters.

The big names that form a part of Dub Nation.

Born in California, the Hollywood mega-star has been a fan of the Warriors since its “We Believe” days. A true fan, Alba has been supporting the Dubs even before its dynasty days. Alba’s husband, Cash Warren, was also friends with former Warriors PG Barron Davis.

It may come across as surprising, but the legendary boxer has played professional basketball for the PBA (Philippine Basketball Association). A hoop lover, PacMan is a big supporter of the Warriors and has even trained in their facility. Pacquiao also shares a great relationship with Warriors guard Steph Curry. The boxer turned politician even expressed his wish to buy an NBA team.

The popular comedian is often seen attending the Warriors games. Chappelle has been a supporter of the Dubs since its “We Believe” days.

Some of the other popular celebrities supporting the Warriors include MC Hammer, Carlos Santana, George Lucas, and Kate Hudson.

Ruben Randall - December 7, 2022 0
Money
Usually when a celebrity dies young and unexpectedly without having prepared a will, it's the prelude to a long and complicated legal battle over...