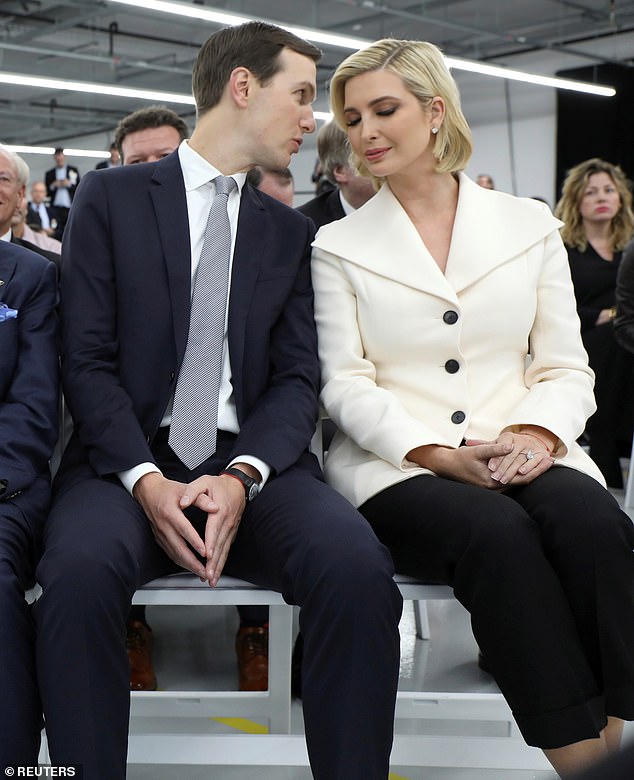 Jared Kushner was diagnosed and treated for thyroid cancer while working in the White House.

Kushner wrote about his cancer scare – which never leaked to the press – in his forthcoming memoir, Breaking History: A White House Memoir.

The New York Times reported on an excerpt of the book on Monday.

In it, Kushner recalled a conversation he had with White House physician Sean Conley on an October 2019 trip to Texas.

‘On the morning that I traveled to Texas to attend the opening of a Louis Vuitton factory, White House physician Sean Conley pulled me into the medical cabin on Air Force One,’ Kushner wrote. ‘”Your test results came back from Walter Reed,” he said. “It looks like you have cancer. We need to schedule a surgery right away.”‘

Kushner told Conley to hold off – and come to his office the next day.

‘Please don’t tell anyone – especially my wife or my father-in-law,’ he said, referencing Ivanka Trump and then President Donald Trump.

Jared Kushner (left) speaks to Ivanka Trump (right) at a Louis Vuitton factory event in Alvarado, Texas in October 2019. In his forthcoming memoir he reveals he learned he had thyroid cancer earlier that day 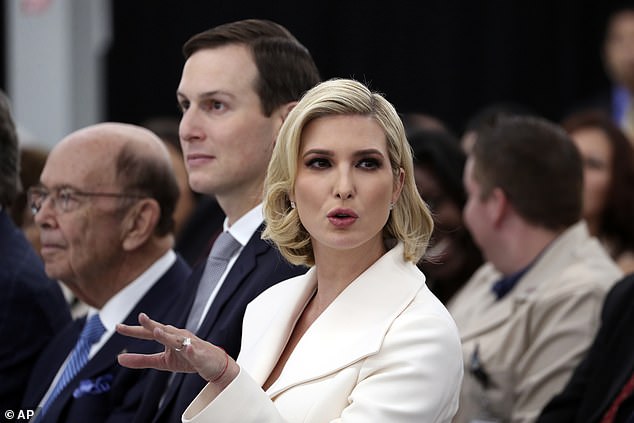 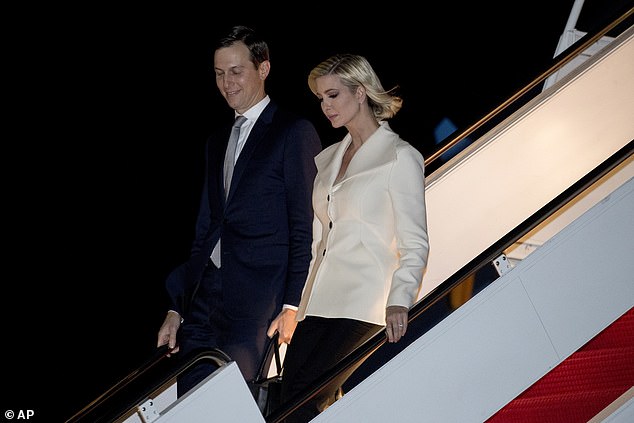 Jared Kushner (left) and Ivanka Trump (right) are captured getting off of Air Force One after the Texas Louis Vuitton trip. Kushner said in his memoir that White House physician Dr. Sean Conley told him he had thyroid cancer that morning 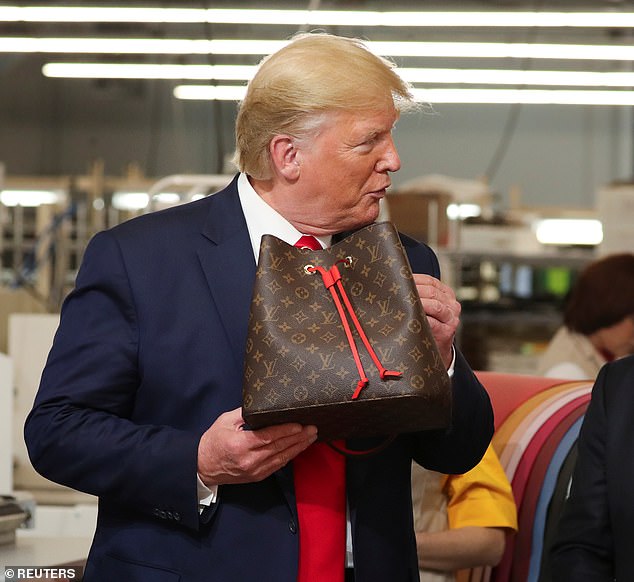 President Donald Trump holds up a Louis Vuitton bag during the October 2019 Texas factory tour, the same trip that Jared Kushner said he found out he had thyroid cancer 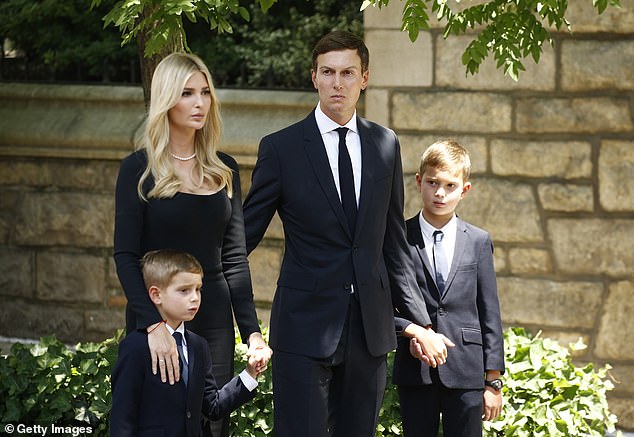 Both Ivanka Trump and Kushner worked in the White House as senior advisers to the president.

Photos from that day show Kushner seated alongside his wife at the Alvarado, Texas Louis Vuitton plant.

They’re seated front row at President Trump’s speech, while the president is photographed checking out the quality of the bags.

Kushner said his cancer had been caught ‘early’ but that a ‘substantial part of my thyroid’ needed to be removed.

He feared that the surgery could impact his ability to speak.

A doctor at New York-Presbyterian Hospital ‘concluded that I needed surgery to remove an unusual growth in my thyroid, and we scheduled the operation for the Friday before Thanksgiving.’

‘That way, I would miss the least amount of time in the office. My absence might even go unnoticed. That’s how I wanted it,’ Kushner continued.

‘This was a personal problem and not for public consumption,’ the top Trump adviser added.

Kushner said he tried to concentrate on work and ‘not to think about the upcoming surgery or the unwanted growth in my body.’

‘When I did think about it, I reminded myself that it was in the hands of God and the doctors, and that whatever happened was out of my control,’ he wrote. ‘At moments, I caught myself wondering whether I would need extensive treatment.’

He said the only people he let know were Ivanka Trump – two of his aides, Avi and Cassidy – and White House Chief of Staff Mick Mulvaney.

The president, however, found out.

‘The day before the surgery, Trump called me into the Oval Office and motioned for his team to close the door,’ Kushner said.

‘Are you nervous about the surgery?’ he recalled Trump asking him.

Kushner asked his father-in-law how he knew.

‘I’m the president,’ Trump answered. ‘I know everything.’

‘I understand that you want to keep these things quiet. I like to keep things like this to myself as well. You’ll be just fine. Don’t worry about anything with work,’ the president said. ‘We have everything covered here.’

Kushner’s book will be released August 23. 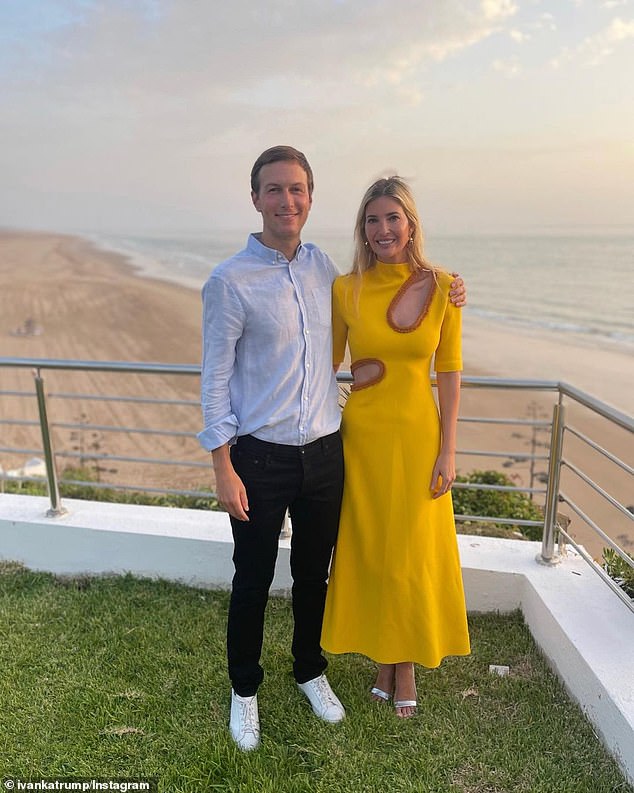 Jared Kushner (left) and Ivanka Trump (right) on a recent trip to Morocco. Initially, Kushner did not want his wife to know about his cancer diagnosis, he wrote in his forthcoming memoir

WHAT IS THYROID CANCER?

It is one of the rarer cancers that affects the thyroid gland, a small gland at the base of the neck that produces hormones.

It’s most common in people in their 30s and those over the age of 60, with women up to three times more likely to develop it than men.

Thyroid cancer is usually treatable, with a 10-year survival rate of 84 per cent, and in many cases can be cured completely.

Thyroid cancer happens when there’s a change to the DNA inside thyroid cells which causes them to grow uncontrollably and produce a lump.

It’s not usually clear what causes this change, but there are a number of things that can increase your risk.

There are four main types of thyroid cancer:

Ruben Randall - April 30, 2022 0
Money
Following up from what many call the greatest late night television show of all time with Craig Ferguson was already a gargantuan task but...