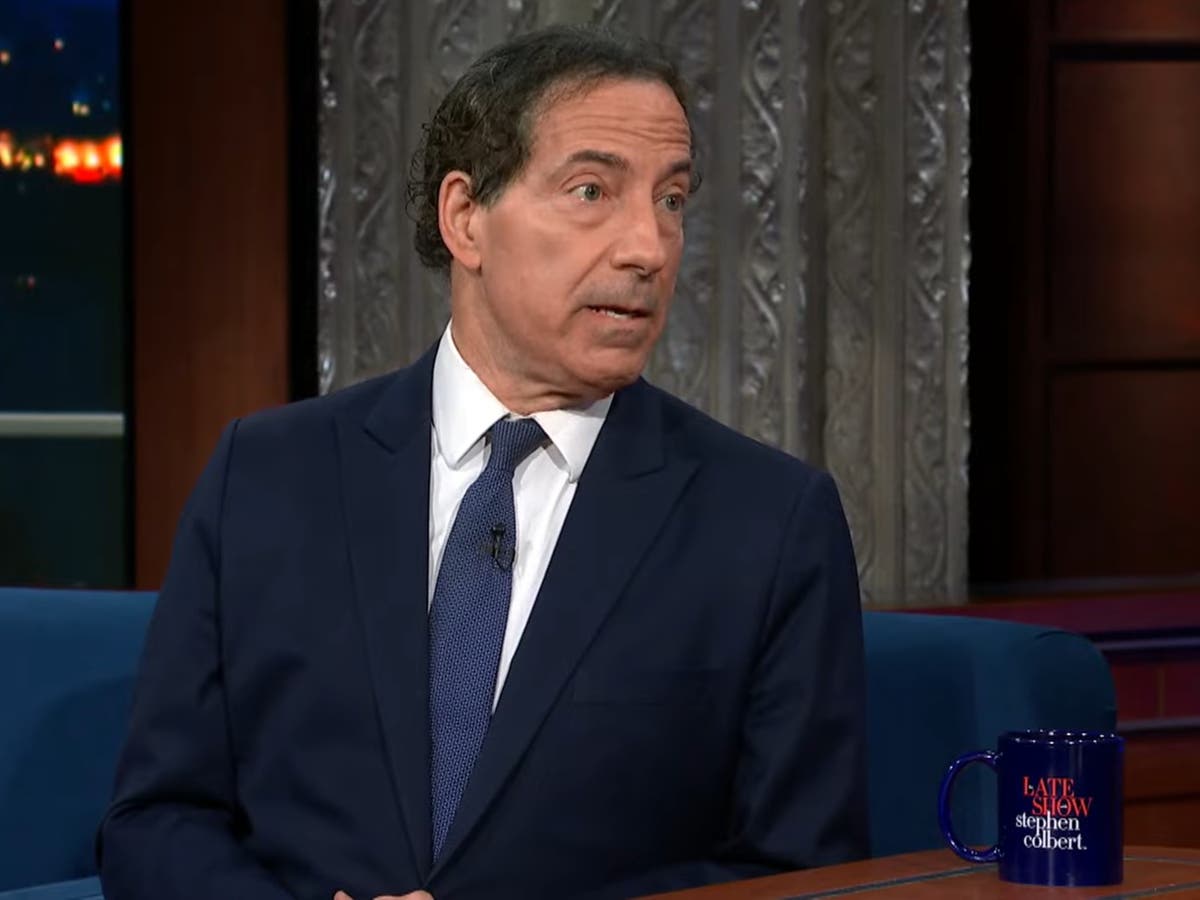 Trump cut call for January 6 prosecutions from draft of speech

Congressman Jamie Raskin, one of the Democratic members of the Jan 6 select committee, said last night that he does not believe the US Secret Service’s explanation for why agents’ texts from 5 and 6 January 2021 are missing.

The service recently provided the select committee with a single text. Asked by Late Show host Stephen Colbert what he thought, Mr Raskin replied: “I don’t really buy that for one minute…there was a preplanned migration of phones that just happened to be on the same day as the first violent insurrection in American history? So I’m a little dubious of that.”

Meanwhile, the committee has revealed that Donald Trump heavily edited the text of a speech he recorded the day after the Capitol riot, cutting a crucial sentence that called for those who violently attacked Congress to be prosecuted.

Along with videotaped testimony from various administration witnesses, the committee released footage of Ivanka Trump confirming that the handwriting on the script is her father’s.

Jamie Raskin appeared on Stephen Colbert’s Late Show last night to discuss the work of the Jan 6 select committee, and he was unsparing in his judgment of the Secret Service’s claim that texts from 5 and 6 January were deleted by accident.

“When was the last time you got one text in a day?” he asked, referring to the service’s production of a single message in response to the select committee’s request.

“I don’t really buy that for one minute. For one thing, isn’t it a little odd that all the texts would vanish for 6 January and 5 January? Of all the days, what an odd coincidence that is.”

Tom Nelson, a candidate who tried to position himself as the most progressive in Wisconsin‘s Democratic primary race for U.S. Senate, announced Monday he dropped out of the contest to face Republican incumbent Ron Johnson in November.

Nelson, the Outagamie County executive, threw his support to Lt. Gov. Mandela Barnes, who is in a tight race with Milwaukee Bucks executive Alex Lasry. State Treasurer Sarah Godlewski is polling further behind. Nelson was in fourth place.

“Mandela can now count on me to be on his side every step of the way,” Nelson said in a statement. “I urge other Democratic primary voters to also support him now as well.”

Nelson’s decision ends a campaign he launched in October 2020.

Federal filings show Nelson raised a little less than $1.4 million for his campaign and he said “unfortunately, money matters way too much in politics and running against two self-funding millionaires proved too much for this pastor’s kid.”

Tom Nelson, a candidate who tried to position himself as the most progressive in Wisconsin’s Democratic primary race for U.S. Senate, says he’s dropped out of the contest to face Republican incumbent Ron Johnson in November

Saul Levin, a staffer for Representative Cori Bush, posted photos of himself and other members of Ms Bush’s team in Mr Schumer’s office on Monday.

“To my knowledge, this has never been done,” he tweeted. “We’ve also never seen climate catastrophe, so we’re meeting the moment. Follow along as we fight with everything we have to jumpstart climate negotiations.”

Kinzinger uses military service to clap back at Matt Gaetz

When former President Donald Trump took the stage before a crowd of more than 5,000 young conservative activists in Tampa this weekend, he received the rock star’s welcome he’s grown accustomed to over the seven years in which he’s reshaped the Republican Party.

One night earlier, it was Florida Gov. Ron DeSantis who had the crowd on its feet as he headlined the day’s program at Turning Point USA’s annual Student Action Summit.

“To be honest, it’s like choosing between your favorite child,” said Leo Milik, 19, who lives in Barrington, Illinois, when asked whom he’d like to see as the party’s next nominee.

Milik, wearing a “Trump was Right” baseball cap, said both Republicans “have their pros, they have their cons.” For now, he said, he’s leaning toward Trump.

That sentiment reflects the soul searching underway inside the GOP as an invisible primary for the 2024 presidential nomination begins to take shape, dominated at least for the moment by Trump and DeSantis.

When heads of state visit the U.S., the top item on their itinerary is usually a White House visit. For Hungarian Prime Minister Viktor Orban next month, it will be addressing a conference of conservative activists in Dallas.

Orban’s appearance at the Conservative Political Action Conference, where he’ll be joined by former President Donald Trump and right-wing icons such as Rep. Marjorie Taylor Greene, R-Ga., is the most dramatic indication yet of how a leader criticized for pushing anti-democratic principles has become a hero to segments of the Republican Party.

Orban has curbed immigration and stymied those who envision a more middle-of-the-road European democracy for their country. He’s done so by seizing control of Hungary’s judiciary and media, leading many international analysts to label him as the face of a new wave of authoritarianism. He also is accused of enabling widespread corruption and nepotism, using state resources to enrich a tight circle of political allies.

The U.S. conservative movement’s embrace of Orban comes as it echoes Trump’s lies that he did not lose the 2020 presidential election, punishes Republicans who tried to hold him accountable for the Jan. 6 attack on the U.S. Capitol, and embrace new voting restrictions. Many experts on Hungarian politics fear the GOP might aspire to Orban’s tactics.

“The Trumpist side of the Republican Party is coming for the rhetoric, but staying for the autocracy,” said Kim L. Schepple, a sociologist at Princeton University who has studied Orban. “I’m worried the attraction to Orban is only superficially the culture war stuff and more deeply about how to prevent power from ever rotating out of their hands.”

Hungary’s controversial prime minister is coming to the U.S. to address a gathering of conservative activists

The prosecutor who’s investigating whether former President Donald Trump and his allies illegally tried to interfere in the 2020 election in Georgia cannot question a lawmaker who signed a certificate falsely stating that Trump won the state, a judge ruled Monday.

Superior Court Judge Robert McBurney agreed with Republican state Sen. Burt Jones that Fulton County District Attorney Fani Willis had a conflict of interest because she hosted a fundraiser last month for Jones’ Democratic opponent in November’s election for lieutenant governor. McBurney said during a hearing last week that Willis’ decision to host the fundraiser was “a ‘What are you thinking?’ moment. The optics are horrible.”

Willis can still ask other witnesses about Jones, the judge said, but will not be able to bring charges against him. Instead, the Prosecuting Attorneys’ Council of Georgia, a nonpartisan association of Georgia district attorneys, should appoint another prosecutor to decide if any charges should be brought against Jones, one of 16 Georgia Republicans who falsely claimed to be the state’s “duly elected and qualified” electors.

“Today’s ruling is a huge win for our campaign — but more importantly, for due process and the rule of law in Georgia,” Jones said in an emailed statement.

5 Must-see Movies With An Animal in a Pivotal Role

Ruben Randall - January 15, 2022 0
Money
Tom Holland is one of the best young actors today. From starring at the famous London West End to now being one of the most...