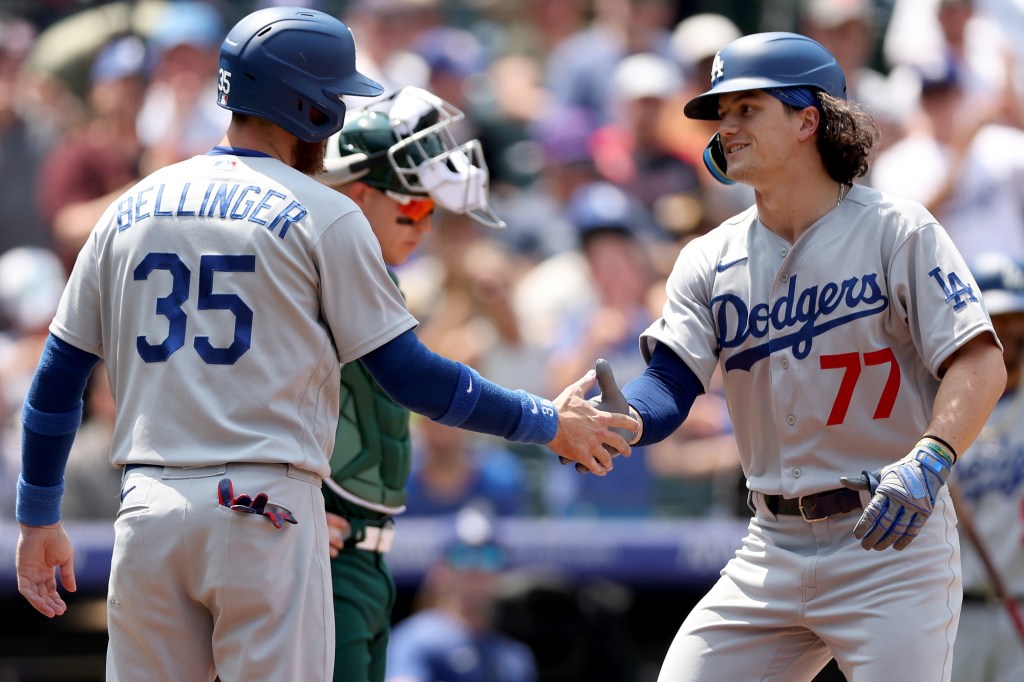 DENVER — The pundits were right — adding a left-handed hitting right fielder before the trade deadline really can have an impact.

“From what I understand, it was historic,” Dodgers manager Dave Roberts said of Outman’s arrival which also included a single and an RBI double. “What a debut – three hits, a homer. Really fun to watch. You could just see his joy. A day that he’s dreamt about. For it to play out like this I can only imagine how he’s feeling, his family is feeling.”

Outman wasn’t the only one making history Sunday. The Dodgers’ win finished one of the most successful July runs in MLB history.

“Certainly the win-loss obviously has been fantastic. But just how we’re going about it is something that I think we can hang our hat on and continue to do,” Roberts said.

Outman will have trouble topping his first act.

Promoted from Triple-A to balance the Dodgers’ roster after they traded a position player (Zach McKinstry) for a pitcher (Chris Martin), Outman hit the third pitch he saw in a major-league game 405 feet into the Rockies’ bullpen beyond the right-field wall.

See also  45 Yo Mama Jokes That Are Absolutely Savage (Yet So Funny!)

“To be honest, I don’t remember like 30 minutes after I hit that. I was just running high.” Outman said after the game, unable to contain the smile stretching across his face.

He also had a single that left the bat at 109.5 mph (the hardest-hit ball of the game) and an RBI double in four at-bats, becoming the first Dodgers rookie to have three or more hits in his MLB debut since Mike Piazza on Sept. 1, 1992. Only two other Dodgers — Jose Offerman in 1990 and Ernie Koy in 1938 — had a three-hit game that included a home run in their first career game. Only one other rookie in franchise history (Packy Rogers in 1938) had three hits and three RBI in his first MLB game.

It was the debut of dreams.

“Yeah, I did (dream about having a MLB debut like this). I never really thought that it was gonna be something that was gonna happen,” Outman said. “Obviously, I dreamed of it, playing wiffle ball in the backyard and stuff like that. But yeah, it’s awesome.”

The third-inning homer, against Rockies right-hander Germán Marquez, made Outman the eighth player in Dodgers history to hit a home run in his first plate appearance, the fourth to do it since the team moved to Los Angeles. He joins Keibert Ruiz (2020), Garey Ingram (1994) and Offerman.

“I think everyone was making jokes about, ‘The game’s pretty easy,’” Roberts said of the dugout reaction to Outman’s homer.

Reliever Alex Vesia was able to retrieve the home run ball and Outman posed for photos with it in a case next to his locker after the game.

“I’m gonna stare at it for a long time and then I’m gonna put it up in my childhood room next to all my other baseball stuff,” Outman said. “I got like a shelf of all my Little League home runs and stuff like that. That might top them all.”

The Dodgers needed another two-run inning in the fourth to take the lead for good. A pair of walks set up Cody Bellinger for an RBI double. A second run scored when right fielder Randal Grichuk bobbled the ball — one of seven Rockies errors in this four-game series.

That regained the lead for Dodgers starter Tony Gonsolin, who has started to show the slightest signs of regression as he enters uncharted waters (for him) past the 100-inning mark.

Gonsolin lasted just five innings for the second time in his past three starts and gave up three runs or more for the third consecutive start after doing that just once in his first 16 starts this season.

“No. I feel pretty good,” Gonsolin said when asked if the workload is beginning to wear on him. “I mean, everybody goes through their ups and downs. Hopefully, this is just a quick down and then we can turn it around.”

The Rockies got to him for all three of their runs in the third inning. Brian Serven led off with a home run and the Rockies loaded the bases with one out thanks to a hit batter, a walk and a dribbler down the third-base line that stayed fair only with a final, slight rotation of the ball before Gonsolin could pick it up.

Grichuk followed that with a two-run single to right field, part of a 7-for-16, 8-RBI series for the former Angels first-round draft pick.

“I know stuff is a little bit different here, but overall if you make a good pitch, it’s still a good pitch,” Gonsolin said. “I thought my slider came around really well. I was happy to see that. Some good fastballs. Splitter was a little weird. That was probably the one that was weirdest today. But overall, it was a little bit of a grind.”

Gonsolin got a double-play ball to escape further damage, but his pitch count had reached 63 after just three innings, foretelling his shortened start.

The Dodgers’ bullpen shut out the Rockies over the final four innings while the offense gave them more Coors Field cushion by adding single runs in the sixth (Jake Lamb’s leadoff double cashed in on a Max Muncy sacrifice fly), seventh (an RBI double by Freddie Freeman) and eighth (Outman’s double).

10 Important Facts To Know About The Unofficial Bridgerton Musical Lawsuit