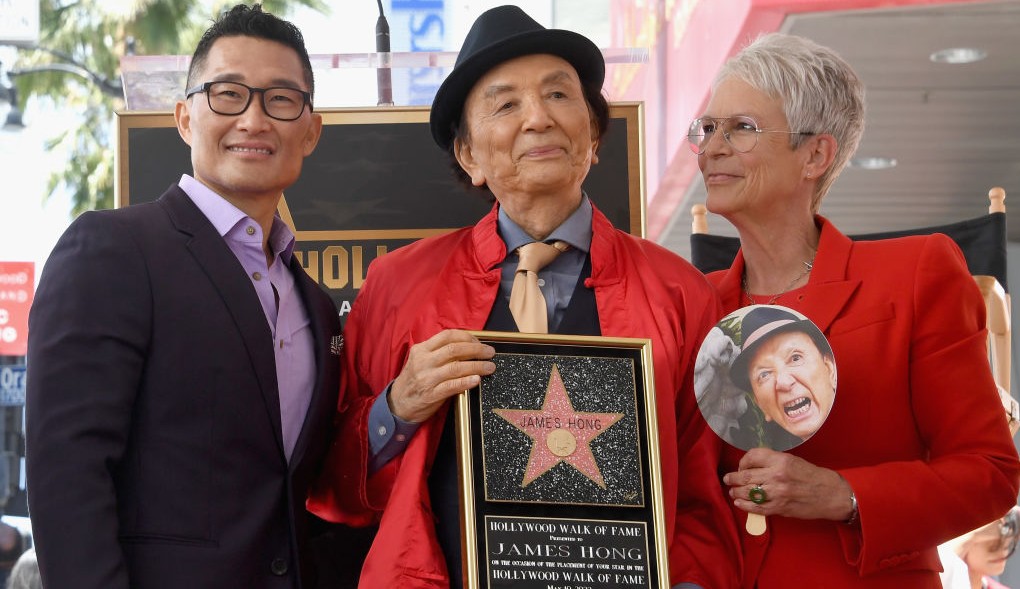 At 93 years of age, and after 650 movies and TV roles, actor James Hong, star of Everything Everywhere All At Once, FINALLY got his star on the Hollywood Walk of Fame. He is now the oldest person ever to receive a star.

It took fellow actor and friend Daniel Dae Kim, who co-starred with Hong back in 2001 on the TV show Charmed, four days on GoFundMe to raise the $50,000 needed to secure the star. Both Kim and his Everything… co-star Jamie Lee Curtis spoke at the star unveiling in Hollywood yesterday, and it was quite the party.

Jamie Lee Curtis took a strong stance during her speech, standing next to Hong, apologizing to any children present before cussing, “It’s about f***ing time that we are here honouring James Hong with a star on the Hollywood Walk to Fame!” Honestly, where’s the lie?

Daniel Dae Kim took the opportunity to list off many of Hong’s accomplishments in Hollywood that stretch back to the 1950s. You might remember him from such classics as The New Adventures of Charlie Chan, Dragnet, Big Trouble in Little China, Blade Runner, Mulan, Kung Fu Panda, and of course, the maître d’ on Seinfeld who kept the foursome waiting for a table. His latest hit is the reality-bending action-comedy Everything Everywhere All At Once which is proving to be a huge box office hit.

Kim also acknowledged the importance of this star during Asian Heritage Month to give hope to others in the community wanting to break into showbiz.

“I’m looking at all of you right here, many of you who deserve to be here, as well. In time, I’m confident that it will happen,” Kim said in his speech. “But I’m equally confident in saying that no one will have blazed the trail the way that James Hong has… Today, during the heart of Asian Pacific American Heritage Month, it’s only fitting that we honor someone who personifies the term ‘trailblazer.’”

Then the Always Be My Maybe star joked about Hong’s use of caps lock in emails.

“James, imagine now that the thing I’m about to say next is being typed in all caps, and let’s say it’s bolded and italicized for good measure,” he joked. “You are truly deserving of the honour you’re about to receive, and you make us all so very, very proud.”

“As you can see, I don’t have any speeches, because I’m not that kind of person. I just come here. I want to feel the moment,” Hong said at the ceremony, where he danced with a parade of Chinese dragons.

Speaking with Variety before the ceremony, Hong revealed the struggle and discrimination he faced when he was starting out in Hollywood in the 50s.

“In the early days, there were no opportunities whatsoever,” he told the outlet. “Opportunities were very few and Asians were still looked down upon as this silent minority. In a sense, I feel I was born too early, because there were no chances.”

“I would definitely like to see what I work for become a reality,” he continued. “I’d love for movies and series to have better representation, to see us playing roles like doctors and businessmen and politicians, like the reality of society.”

“I’ve worked for all that for 70 years and it’s just beginning as far as I’m concerned. Maybe another 10 years when I’m looking down at this world and I say, ‘Yeah, progress.’”

Kim also spoke with Variety and said that Hong’s star takes on a greater meaning in the greater context of representation.

“It … gives me hope that other Asian American actors whose work has been overlooked will get their chance to be recognized, both by the public and during awards season. I also think it’s so important that those of us lucky enough to work in the industry today acknowledge the achievements of those who came before us. It’s one way we can show our gratitude for all the ways they blazed the trail so that we could walk an easier path today.”

At 93, Hong shows no signs of slowing down. He can be heard in the upcoming animated series, Kung Fu Panda: The Dragon Knight and Gremlins: Secrets of the Mogwai and will be seen soon in American Born Chinese alongside his Everything… co-star Michelle Yeoh.

Daniel Radcliffe Opens Up About The Weird Al Yankovic Biopic And The Best Thing...

The 10 Best Arnold Schwarzenegger Roles That Aren’t The Terminator