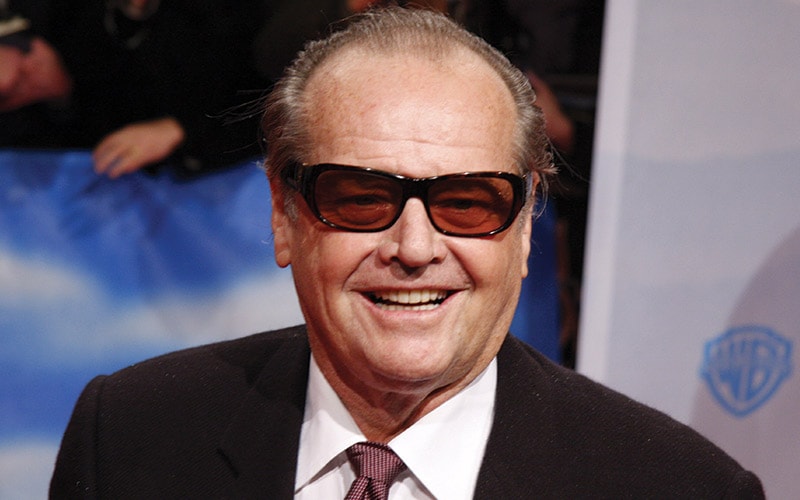 Jack Nicholson is an American-born actor best known for his roles in Chinatown, As Good As it Gets, and The Departed. Since starting his acting career in the mid-1950s, he’s appeared in over 75 movies and television series.

Though, it’s not just his work on camera that contributes to his success. Jack Nicholson’s net worth is also impacted by his work as a writer, director, and producer. Additionally, Nicholson also has an expansive art collection and a number of real estate investments he’s made over the years.

Read on to discover Nicholson’s most successful projects and trace his career from its start until the present day.

John Joseph Nicholson was born on April 22, 1937, in Neptune City, New Jersey. His mother, June Frances Nicholson, was a showgirl who went by the name June Nilson. She had Nicholson when she was only 17 years old. The identity of his father is unknown. However, some suggest that it may have been either Donald Furcillo, who was an Italian American showman, or Eddie King, who was also in show business.

Nicholson was raised by his grandparents, believing that June was his sister. It was only in 1975 that he learned the truth, and both his mother and grandmother had passed by then.

Nicholson attended Manasquan High School near Spring Lake, where his family had moved. He was always in detention and was voted Class Clown. The school would later name a theatre and a drama ward in his honor.

Before Nicholson became the multi-awarded American actor fans love today, he started at MGM cartoon studios. He worked for legendary animation directors William Hanna and Joseph Barbera. They offered him a job as an animator, but he turned it down as his interest was in acting.

In the mid-1950s, Nicholson trained with The Players’ Ring Theatre. Through the group, he gradually got small parts on stage and in soap operas.

Nicholson had his film debut in the 1958 low-budget film The Cry Baby Killer, which Roger Corman produced. Following his debut, Nicholson had no shortage of roles throughout the 1960s, appearing in films like The Little Shop of Horrors, The Raven, Back Door to Hell, and Psych-Out. He also began writing screenplays, beginning with Thunder Island, Flight to Fury, and Ride in the Whirlwind.

Despite all this work early in his career, Jack Nicholson’s net worth still hadn’t taken off. Towards the end of the decade, his base salary was still small in comparison to what it would become. However, that was about to change shortly in the next decade.

In 1970, Nicholson played a supporting role in the independent film Easy Rider. His good friend Dennis Hopper directed it. Nicholson received the first of his twelve Academy Awards nominations for his performance.

The following year, he was nominated again for his role in Five Easy Pieces, this time in the Best Actor category. A third Academy Award nomination came in 1974 for his performance in The Last Detail.

By this time, critics and producers have really taken notice of Nicholson’s talent. But the first film that really made an impact on Jack Nicholson’s net worth was Chinatown in 1974. He received a salary of $500,000, which, for 1974, was a big deal.

It also won him another Academy Award nomination, plus his first Best Actor trophy from both the BAFTA and the Golden Globes. The film earned a total of $29.2 million in theater revenues.

One Flew Over the Cuckoo’s Nest

In 1975, Nicholson starred in the psychological drama One Flew over the Cuckoo’s Nest. He agreed to a base salary of $1 million as long as he also received 15% of the gross earnings.

This proved to be a lucrative deal as the film ended up making $109.1 million at the box office on a budget of only $3 million. By 1978, Nicholson had reportedly earned over $15 million from the film.

But the real icing on the cake was that this role finally won him his first Best Actor Oscar. This elevated status gave him the freedom to be more selective in which parts to take next.

In 1976, he co-starred with Marlon Brando in The Missouri Breaks. He reportedly received a salary of $1.25 million for the role.

The next boost to Jack Nicholson’s net worth came with the 1980 psychological horror The Shining. The movie, which is based on Stephen King’s book of the same title, saw Nicholson in the starring role.

In 1983, Nicholson won his second Oscar for Terms of Endearment. It was his first win in the supporting actor category. He also won the award at the Golden Globes and six other groups.

With a stellar cast that included Shirley Maclaine, Debra Winger, and Danny DeVito, the film became a huge blockbuster. It made over $108.4 million on a budget of only $8 million. Nicholson’s paycheck amounted to $1 million.

Jack Nicholson’s net worth would once again take an unprecedented leap when he was cast to play Joker in Tim Burton’s Batman in 1989. The original salary offer was $10 million. However, Nicholson proposed to take only $6 million. The condition was that he would get a percentage of the film’s backend earnings. In addition, he will also have a cut of the merchandise sales from Joker toys in his likeness.

This proved to be a very lucrative arrangement for Nicholson. The movie raked in an impressive $411.6 million after its theater run, and toy sales were also off the charts. Within five years, Nicholson had earned over $60 million from the deal. After adjusting for inflation, it would be closer to $200 million today.

Considering that Nicholson only had 585 words in the film, this worked out to approximately $166,000 per word spoken in the film. Even in 2022, that’s still one of the largest salaries in movie history. Additionally, Batman is also Nicholson’s highest-grossing film of his career.

In 1992, Nicholson joined Tom Cruise and Demi Moore in the legal drama A Few Good Men. He gave one of his most epic performances as Col. Nathan Jessup. So it was no surprise that he again received a slew of nominations from all the major award-giving organizations.

See also  Journey of This Celebirty From Bottom To Top!

Nicholson took home a salary of $5 million for his role, which was his average base salary at the time. The critically acclaimed film raked in $243.2 million from global ticket sales on a budget of $41 million.

As Good as It Gets

1997 brought another sizable boost for Jack Nicholson’s net worth, this time for portraying the misanthropic writer Melvin Udall in As Good As It Gets. With a budget of $50 million, the movie generated over $314 million worldwide after its theater run.

Nicholson, who turned 60 that year, was reportedly paid $15 million for the role. It also led him to his third Academy Award for Best Actor.

Additionally, As Good As It Gets is Nicholson’s second highest-grossing film of his career.

In 2002, Nicholson starred as Warren Schmidt in About Schmidt alongside Kathy Bates. With a budget of $30 million, the film earned $105.8 million globally and yet again saw Nicholson nominated for a number of awards, including Best Actor at the Academy Awards.

In 2003, Nicholson co-starred with Adam Sandler in the comedy film Anger Management. It was a huge success, making $195.7 million over a budget of $75 million.

However, it was his second movie that year, Something’s Gotta Give, that earned him a Golden Globe nomination. It was also a smashing success, generating over $265.3 million in theater revenues worldwide.

In 2006, Nicholson joined the star-studded cast in the crime thriller The Departed. Directed by Martin Scorsese, the film also starred Leonardo DiCaprio, Matt Damon, Mark Wahlberg, and many more. Brad Pitt was one of the producers.

The movie earned $291.5 million worldwide against a budget of $90 million. And Nicholson’s salary for the film amounted to $10 million.

Additionally, The Departed is Nicholson’s third-highest-grossing film of his career.

The following year Nicholson would receive another $10 million paycheck, this time for The Bucket List. In one of his last films before retiring from acting, Nicholson teamed up with fellow veteran Morgan Freeman for the movie. The total box office revenues came up to $175.4 million against a budget of $45 million.

Nicholson retired from acting in 2010. The last film that he appeared in was How Do You Know under the direction of James L. Brooks, who was also the director of Terms of Endearment and As Good As It Gets.

In 2015, Nicholson appeared as a presenter on the Saturday Night Live 40th anniversary special. And in 2016, he appeared in an interview on The Fight Game with Jim Lampley. He talked about his friendship with Muhammad Ali, who died on June 3 that year.

A considerable portion of Jack Nicholson’s net worth comes in the form of his very impressive art collection. He began acquiring pieces in the 1960s and now owns works by Picasso, Rodin, Matisse, Bouguereau, and Magritte, among many others. Today, the estimated value of his collection is $150 million.

Also impacting Jack Nicholson’s net worth are the real estate investments he’s made over the years. His primary home lies on his 3-acre Beverly Hills property. Situated on Mulholland Drive, this compound began as a single property that he purchased in 1969. He gradually acquired neighboring pieces of land over the years. The latest addition in 2005 was purchased from his buddy Marlon Brando for $5 million.

Nicholson has reportedly owned more than a dozen homes around the country. For example, in Los Angeles, there is a Santa Monica mansion, a Venice condo, and a vast Malibu property that covers 70 acres.

He also has a home in Northern California and a beach property in Hawaii. In 2015, Nicholson had listed an Aspen Colorado home for $15 million, eventually selling it for $11 million a year later.

Jack Nicholson has had a number of relationships over the years. However, he’s only been married once. He has six children with five women.

Nicholson’s only marriage was to actress Sandra Knight back in 1962. They divorced in 1966 and have one daughter. Nicholson’s eldest son was born in 1970 to actress Susan Anspach. From 1971 to 1972, Nicholson dated singer Michelle Phillips.

Shortly after began his longest relationship, which was with actress Anjelica Huston. The couple’s on-and-off romance lasted from 1973 to 1990, when Huston finally broke it off after Nicholson reportedly had an affair with actress Rebecca Broussard. Nicholson and Broussard had two children together. They separated in 1994.

Nicholson went on to date actress Lara Flynn Boyle from the late 1990s to 2004. He then dated supermodel Kate Moss, then was later linked to actress Paz de la Huerta.

As far as what Nicholson is a fan of, he’s an avid fan of the Los Angeles Lakers and the New York Yankees. He always has courtside season tickets and has rarely missed a game.

As of 2022, Jack Nicholson’s net worth is estimated at $400 million. And while a large portion of that number comes from his acting career, it’s also heavily impacted by his art collection, real estate investments, and writing and producing work.

Since Nicholson has retired, he doesn’t have any upcoming projects.