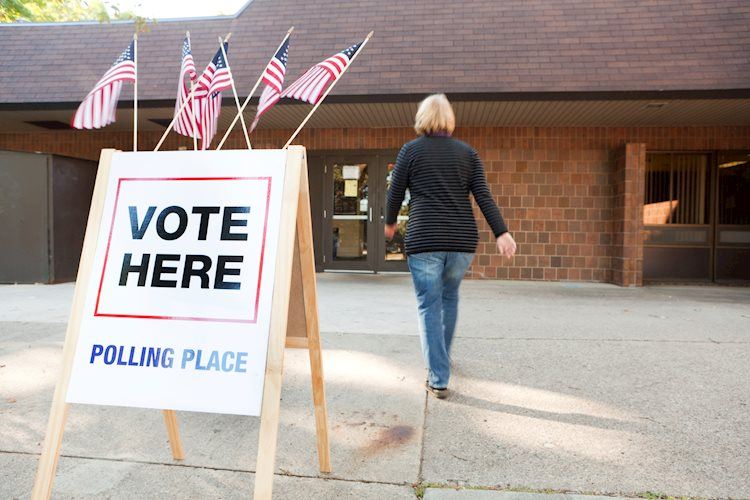 There wasn’t any economic news to fuel the move, but there is plenty of political news to help stir the pot…..How much damage will the Dem’s suffer?  Will the GOP take both the House and Senate?  Just an fyi – Joey is still running on the idea that the Dem’s will pick UP seats in both houses of congress to maintain even more control over the country – which speaks directly to him being a tad bit out of touch – every poll taken over the past 6 months has pointed to a change in leadership in the House and more recently now the Senate.

The races are very close – so don’t expect any answers tonight…..the President and the MSM are already preparing us for a long, extended ‘vote counting’ period.  In fact – Joey is preparing the country for ‘days’ of vote counting before verification takes place.  December 6th has already been identified as the runoff date for any questionable races. (Think GA all over again). And to add even more chaos to the picture – we got Donny threatening to confirm his status as ‘the’ Presidential candidate for 2024 – the announcement to be made next week (15th) from his home at Mar-a-Lago.

Word that Nancy is considering retirement was trending all day on twitter – saying that the recent attack on her husband has pushed her to make that decision…..to which I might ask –
Ummm, isn’t that just a bit curious….is it the attack on Paul or is it the fact that she is about to lose her position as Speaker of the House?  The thought of losing that job and going back to being just a ‘member’ of the house is too much to bear…because even the role of minority leader is surely not going to her.  Because in the final analysis – much of the beating that the democrats are going to take can and will be pinned on her, Chucky and Joey (and Bernie, Alexandra, Lizzie, and ‘the squad’ which by the way have all gone curiously dark, it’s like they fell off the radar screen, poof!  Gone!).

I mean look, everyone wishes Paul Pelosi a speedy recovery, violence is never the answer, but let’s be honest – the truth is that it will be the loss of her position after the GOP takes control in the house that is driving that decision – even her own caucus wouldn’t support her in the role of Minority Leader and that would be too much to bear.   Now all she has to do is get that job of ambassador to Italy and she’ll be good.  She just needs to get rid of the current ambassador – Cindy McCain.  Oh it’s a tangled web we weave… remember – Cindy McCain is a Republican.

Now the bulls have come charging back over the past week or so….taking comfort in the fact that history will most likely repeat itself and that we will find the markets higher 3, 6 and 12 months out.  The polls reflecting what much of the country is feeling (and knows) – get ready for a GOP win and if that is true – then get ready to see the out of control spending come to a screeching halt. And that will be good…causing gridlock in DC.  Many saying that if we see a GOP sweep and then see a halt to all of this fiscal spending then that could push the country into an even deeper recession – but that’s just the narrative that the Dem’s want you to believe.  In the end a divided gov’t would probably be the best outcome (imo) as it will cause both sides to come to the middle while eliminating the fringes in both parties.(think far left and far right).

Look inflation is at the top of mind for investors and voters – so a change in leadership will be seen as good and that is what the market is telling you.  Look – inflation is going up – and while this month’s report may show a slight decline – I think that is just a flash in the pan….I do not think we have hit the peak just yet.

Now there are 3 possible outcomes – the Dems retain control – 0% chance, Congress get split with the GOP in control of the House leaving the Dems in control of the Senate – I give that a 50% chance of happening, while the final result would be a complete GOP sweep of congress and that I give a 50% chance of happening.  So it really is split – and while 34 Senate seats are up for re-election – it really comes down to GA, FL, PA and NV to see who either retains or gains control of the Senate.  In addition there are the Governor races that will also change the complexion of the political landscape – so it is and will be a very exciting day for the country.

US futures are flat going into the morning….the Dow up 50 pts, the S&P up 2, the Nasdaq up 22 and the Russell is up 4.  And while there are some key earnings data today – don’t expect them to drive the action at all….it will be all about the speculation over who is going to take GA, AZ, NV and PA in the senate along with who wins the governorships in NY and AZ.  And while the House is important the polls have basically laid out the results and it appears as if the country has moved on.

Treasuries holding in tight not making any dramatic moves just yet….

European markets are mixed with the markets across the region between -0.2% – +0.2%.

The S&P closed at 3806 – up 36 pts. The change in leadership most likely leading to this latest rally – the  extent of the next move dependent upon how much of a drubbing the Dems take…. It’s all very complicated, but remember – politics don’t price stocks in the long run, a strong economy does.

Sit tight as a long-term investor – stick to the plan – I suspect we will see that year-end rally if we see a flip in congress…. Look beyond the next 6 weeks and instead focus on the next 6 – 12 months…..Look at the mega cap, multinationals that generate good cash flow, pay nice dividends and can weather the storm. Remember – buy the STPN (Stuff that People Need).  Energy, Healthcare, Consumer Staples, Utilities and some big megatech – NOT social tech!

Corn bread is one of those things that everyone remembers… I mean who doesn’t like corn bread? Hot out of the oven, schmear some butter and a cold glass of milk – reminds me of being a kid – no?

Preheat the oven to 375 degrees.

Melt the butter in the microwave.

Combine the dry ingredients in a bowl. Mix the egg into the buttermilk or milk. Mix well and then add to the dry ingredients. Add the butter. (If it seems too dry, add a bit more of the milk) Pour the batter into greased muffins tins or a greased baking pan. Tap on the counter to remove any air bubbles and now place in the oven.

Bake for about 20 minutes and then stick the knife in – if ready it will come out clean. If not – bake a bit longer. You want the top to be lightly browned while the sides have pulled away from the pan.

When you pull it out of the oven – use a fork and poke holes in it… all over – don’t destroy it, just poke holes. Now squeeze the honey out and spread it over the top of the hot cornbread – allowing the honey to absorb through the holes. Serve this on your Thanksgiving Day table.

Ruben Randall - November 23, 2022 0
Money
An American actor, comedian, writer, producer, and musician with a net worth of $25 million is Andy Samberg. His work with the musical comedy...

Teen Mom Kailyn Lowry reveals she wants her ‘own show’ as...