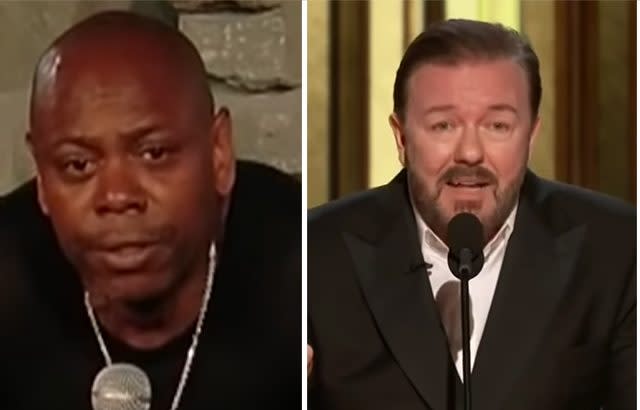 In a wide-ranging interview published today in the New York Times, Netflix co-CEO Ted Sarandos has doubled down on his prior defenses of artistic freedom, backing comedians Dave Chappelle and Ricky Gervais.

Both comics are under fire in some quarters for perceived digs at transgender people. The controversies prompted some Netflix employees to stage an earlier walk-out protest.

In the interview with Maureen Dowd, Sarandos said he was taken by surprise at the reaction, but didn’t hesitate to support Chappelle. He added that the only way comedians can figure out what’s acceptable is by “crossing the line every once in a while. I think it’s very important to the American culture generally to have free expression.

The Chappelle support “wasn’t hard in that way. And rarely do you get the opportunity to put your principles to the test,” he said. “It was an opportunity to take somebody, like in Dave’s case, who is, by all measure, the comedian of our generation, the most popular comedian on Netflix for sure. Nobody would say that what he does isn’t thoughtful or smart. You just don’t agree with him. ”

Days after Chappelle was attacked onstage at the Hollywood Bowl during the “Netflix Is a Joke Festival,” Netflix released a new corporate culture memo,. The summary suggested, “If you’d find it hard to support our content breadth, Netflix may not be the best place for you.”

That line in the sand was celebrated by conservatives, which surprised Sarandos. “It used to be a very liberal issue, so it’s an interesting time that we live in.”

He added, “I always said if we censor in the US, how are we going to defend our content in the Middle East?”

Sarandos said his remarks about Chappelle applied to Gervais.

Ruben Randall - August 17, 2022 0
Money
Candace Cameron Bure is one of the most beloved ’90s stars in Hollywood, but she’s found herself in the middle of several controversies over...