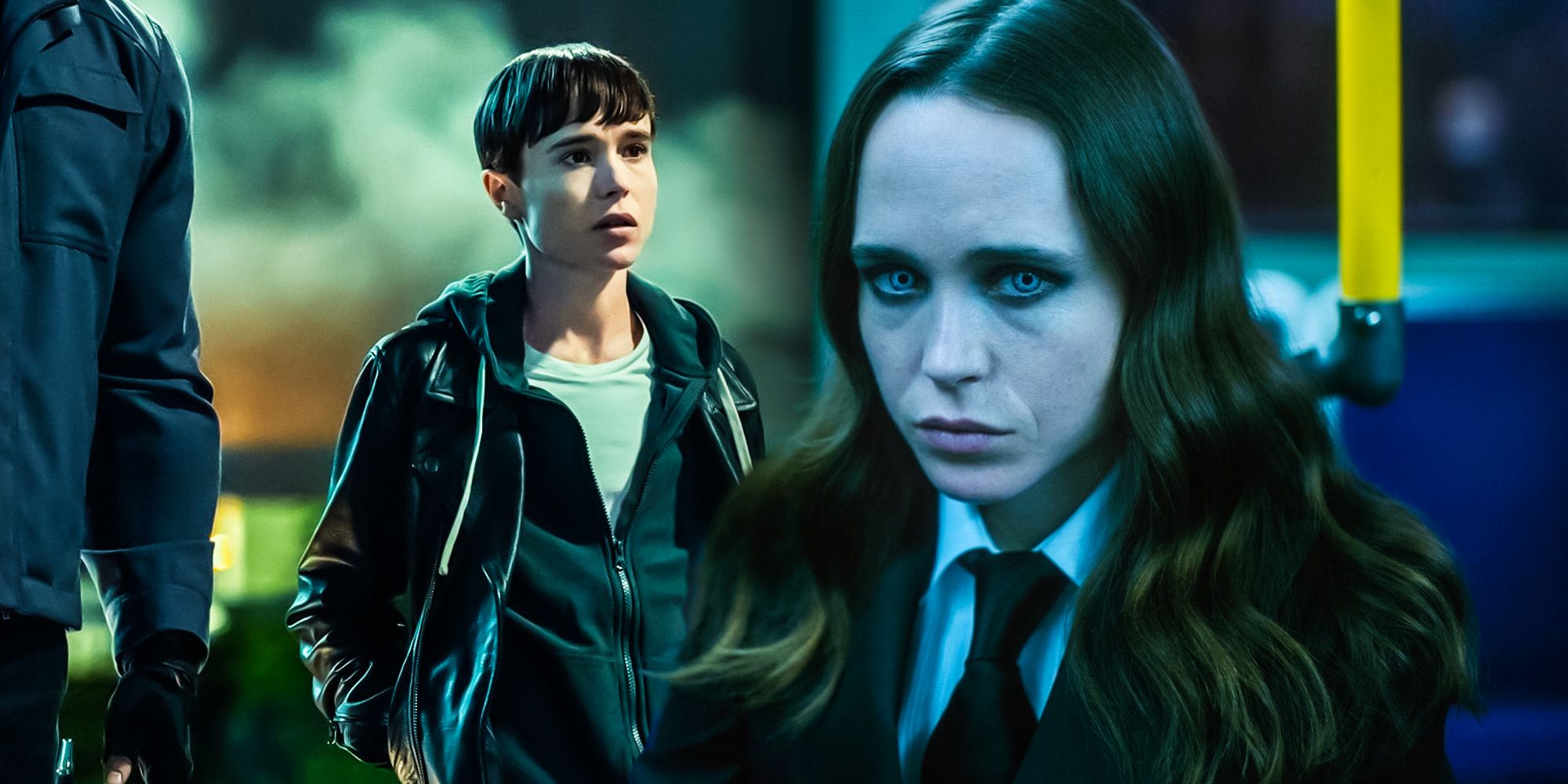 Elliot Page has been confirmed to be returning for The Umbrella Academy season 3 and will be reintroduced to viewers as Viktor Hargreeves.

Elliot Page will be returning for The Umbrella Academy season 3, but to what extent will they portray Vanya Hargreeves? The Umbrella Academy season 3 will pick up right where season 2 left off with a massive cliffhanger. After failing to save the world in the season 1 finale, the Hargreeves siblings found themselves stranded in 1960s Dallas for the duration of The Umbrella Academy season 2. There, as they attempted to prevent another apocalypse, they asked their father’s younger self for help only to be turned away. Unfortunately, by telling Reginald Hargreeves (Colm Feore) his future, the Hargeeves siblings seemingly changed their fates. When they finally managed to return to 2019, they found they had been replaced in the timeline by The Sparrow Academy and were equally shocked to find their sibling Ben (Justin H. Min), who had died when they were all teenagers, alive and well.

In December 2020, in an emotional social media post (via Instagram), Elliot Page announced that they were transgender and updated their pronouns to he/they. Much later, in a separate Twitter post, Page uploaded a picture of Number 7 sitting next to his sister Allison (Emmy Raver-Lampman) in a diner, captioned “Meet Viktor Hargreeves.” While speculation had been rampant about how Elliot’s announcement would affect the show’s storyline, the portrayal and naming of Viktor presents the series with exciting and impactful possibilities for Viktor’s character arc.

Related: Why Viktor Hargreeves Was Always Right For Umbrella Academy

Elliot Page has portrayed Vanya Hargeeves, AKA Number 7, throughout The Umbrella Academy season 1 and season 2. His portrayal of Vanya was nuanced and layered, and the character’s development throughout the show has been astronomical. Vanya is initially closed off and unsure of themselves, the result of years of emotional neglect, lies, and narcotics meant to keep their powers contained. By the end of season 2, however, Vanya has learned to control their abilities, embrace who they are, fall in love, and bond with their siblings once more. It’s an emotional journey and one that is likely to continue throughout The Umbrella Academy season 3. The official trailer for The Umbrella Academy season 3 does appear to show a few glimpses of Vanya, however, so it seems that Page will still be portraying Viktor pre-transition, even if it is for just a few scenes.

Will Viktor’s Transition Be Portrayed In Season 3?

An abundance of theories and speculation as to what Viktor Hargreeves’ story might be in season 3 has circulated since Page posted that picture of Viktor and Allison on Twitter. The two possibilities that were the most likely were either that Viktor is the Number 7 audiences already know and he has transitioned, or that Viktor Hargreeves is Number 7 from an alternate timeline. Though the latter could certainly have provided an interesting storyline and still culminated in the original Umbrella Academy’s Number 7 transitioning as well, it has recently been confirmed that Viktor’s transition will be a part of his character’s journey throughout the events of season 3 (via Esquire).

Viktor’s transition in season 3 will be an interesting continuation of his journey of self-discovery that has already been portrayed throughout the previous seasons. In season 1, Viktor was in a romantic relationship with a man, Leonard Peabody (John Magaro), while in season 2, Viktor fell in love with a woman named Sissy (Marin Ireland). Viktor’s understanding of his gender identity and journey to transition is a natural continuation of Viktor’s journey to confront the past and understand who they are on their terms without their father’s controlling presence.

The Umbrella Academy season 3 will pick up after the Hargreeves siblings managed to avert the apocalypse, the Handler (Kate Walsh) was officially beaten, and they finally returned home to 2019, only to discover that they had been replaced. The final few minutes of season 2 provided the perfect cliffhanger, one that was sure to keep audiences in suspense and curious enough to tune in for season 3. Considering season 3 is highly likely to pick up from the final scene, a few explanations for Viktor’s transition become improbable. If indeed no time passes between season 2 and season 3, there is no logical way for Viktor to have transitioned between seasons. That leaves two possibilities. Either there is a time jump within the season, and Viktor’s transition happens within that time jump, or Viktor’s transition becomes a natural part of his character arc within the season. It seems that the writers of The Umbrella Academy have opted to go for the latter.

Related: Hargreeves Is The Reason The Umbrella Academy Can Beat The Sparrows

The timeline of season 3’s introduction does mean that Elliot Page will be portraying Viktor pre-transition for at least a few scenes. The official trailer does show one or two scenes where Page is still sporting long hair as Vanya wore it in season 2, but these scenes are well and truly outnumbered by shots in which it is clear that Page is portraying Viktor. What’s most remarkable about the scenes in which Page is possibly still portraying Vanya is how confident they are, as they threaten one of the rival Sparrows with the fact that they “ended the world, twice”, making it clear that Number 7 has taken full ownership of who they are and what they are capable of. Viktor Hargreeves may never have meant to destroy the world, let alone twice, but they know they can, and they will be helping to save the world now.

The reintroduction of Elliot Page as Viktor Hargreeves in The Umbrella Academy season 3 may not have always been a part of the overall plan for the show. However, Viktor’s transition is a natural continuation of the story of self-discovery that was already being portrayed in relation to Number 7’s character. Viktor was kept in the dark for so long, both literally and figuratively. Now, they own who they are, understand their power, and they can accept love and return that love in equal measure. The Viktor that audiences will get to know in Netflix’s The Umbrella Academy season 3 is likely to be a far cry from the character Elliot Page first portrayed back in season 1. By not only acknowledging Viktor Hargreeves’ transition but portraying the journey itself as well, The Umbrella Academy has a chance to deepen the theme of struggling with an identity that the show has incorporated since the death of Reginald Hargreeves in season 1.

Next: Why Sparrow Ben Can Be Even More Powerful Than The Umbrella Academy’s


El is a Features Writer for Screen Rant. Having dedicated most of her academic and professional life to the art of storytelling, there’s little she loves more than discussing her favorite movies, TV shows, and books with fellow fans. She recently earned a Ph.D. in Creative Writing and hopes to one day publish an original fantasy novel.

Ruben Randall - May 20, 2022 0
Money
Tom Cruise has been famous for pretty much our entire lives, so yeah: the dude is rich. And not just normal ~celebrity millionaire~ rich....