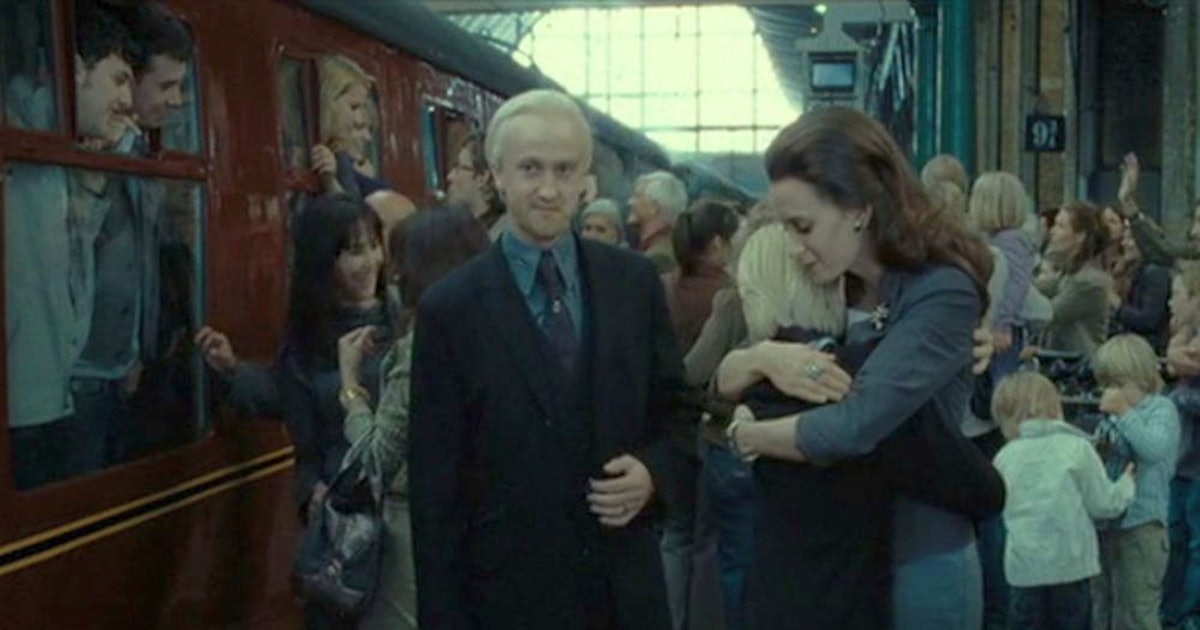 When Fantastic Beasts: The Curse of Grindelwald revealed in the final trailer the heretofore nameless Maledictus character Credence befriends is Nagini, it left fans with a lot to unpack. J.K. Rowling has been retroactively revising her stories around the edges with the Fantastic Beasts movies, as well as Harry Potter And The Cursed Child. The repercussions of these decisions often reach farther than one might think at first glance. Rowling’s defining of a Maledictus has raised an interesting theory. Is Draco’s wife Nagini’s daughter?

For those who remember the epilogue of Harry Potter and The Deathly Hallows, when dropping Albus off at Platform 9 3/4, Harry sees Draco Malfoy and his now-wife, Astoria Greengrass, saying goodbye to their little boy, Scorpius. When Cursed Child picks up, Scorpius and Albus become fast friends. But where Albus is rebelling against a father and mother with heroic reputations, Scorpius is dealing with a mother who is getting sicker every year, and a father who is her full time caretaker.

Then, at the beginning of their third year, Astoria dies.

Or, at least, that’s what they tell us.

According to the Harry Potter wiki, the Greenglass family is an ancient wizarding line, one of the “Sacred 28” families singled out as “pureblooded.” But apparently, Astoria knew from her childhood on she was not going to live long. The Greenglass line has a “blood maledictus” through her mother’s side, and though the disease can skip generations, hers was active.

In the Cursed Child canon, there are lots of nasty rumors about how Astoria managed to get pregnant, considering she was already ill in her early 20s. Some suggest she used a time turner to be impregnated by Lord Voldemort. These vicious stories turn out to be nonsense. In fact, the show puts forward Draco married Astoria as an act of rebellion because she was anti-blood purity and morally opposed to everything Voldemort had stood for.

See also  How Draco and Astoria Got Together

But it’s interesting the rumors tie Astoria back to Voldemort as somehow being his lover. Especially in light of knowing another woman carrying an active blood maledictus was very close to the Dark Lord: Nagini.

It’s possible there are several wizarding families where the women in the family carry this blood curse. But the British wizarding world just isn’t that big. For instance, Draco’s mother Narcissa and Bellatrix are sisters, and Tonk is their niece. All three are related to the fiancé of Theseus Scamander, Leta. This is a small town, especially when you’re talking blood purity.

Could Nagini have been born a Greenglass? Could she be directly related to Astoria? Could Draco have sat at the table where Voldemort held his councils and watched a snake who would technically be his future in-law slither across the table? Did Neville behead Astoria’s mother?

Did Astoria really die in Cursed Child? Or did she change for the final time into an animal? (According to the wiki, Maledictus’ forms are based on their personality.) Did Draco set Astoria free and then hold a funeral, knowing the human he loved was gone? The repercussions of these revelations could be huge.

Fantastic Beasts: The Crimes of Grindelwald arrives in theaters on Nov. 16, 2018.

Be the first to know what’s trending, straight from Elite Daily

Ruben Randall - February 16, 2022 0
Celebrity
The Flyers were most recently swept in a home-and-home against the Detroit Red Wings, bringing their record this season to 15-24-8 in 47...

Westworld’s Jimmi Simpson To Star In New Version Of The Man...