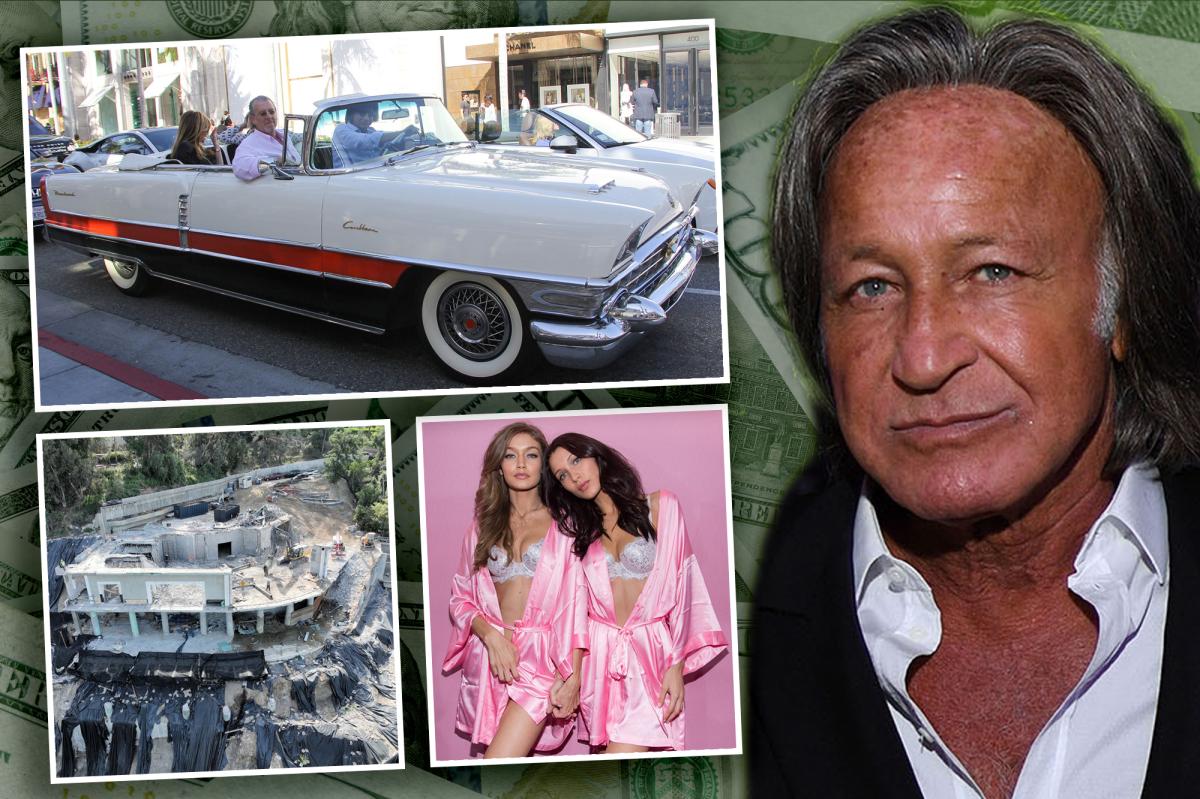 While supermodels Bella and Gigi Hadid are flying high in their careers, their father, real estate developer Mohamed Hadid, is mired in financial and legal troubles.

Last week, a bankruptcy trustee said Mohamed was poised to close a deal on the court-ordered auction of a 66-acre parcel of land he owns in the hills overlooking Los Angeles. He had planned a lavish, hotel-size development, complete with horse stables, a helipad and 11 mansions with stunning views of the city. Two Hadid-controlled companies that own the land, Coldwater Development LLC and Lydda Lud LLC, filed for bankruptcy protection last year, according to court documents.

Earlier in March, demolition began on his sprawling, 30,000-square-foot home that angry Bel Air neighbors had dubbed the “Starship Enterprise.” The teardown was the culmination of a five-year battle that local residents waged in the courts against Mohamed, 73, for cramming the mega-mansion onto a 1.22-acre lot without many of the proper city approvals.

In 2019, a judge ruled that the four-story cliffside property, on Strada Vecchia Road, was “a danger to the public.” Neighbors feared it could slide down the hillside and destroy the homes below it.

Mohamed Hadid — the father of supermodels Gigi and Bella — has been hit with a wave of legal and financial troubles, including business bankruptcy and the demolition of his once-prized home.NY Post photo composite

A bankruptcy trustee recently said Mohamed was poised to close a deal on the court-ordered auction of a 66-acre parcel of land he owns in the hills overlooking Los Angeles.Getty Images for Meesika

In 2017, Mohamed pleaded no contest to violating building codes on the property, which he had hoped to sell for $100 million, and was sentenced to 200 hours of community service and fined.

Russell Linch, who told The Post he worked with Hadid for more than 15 years, claimed that he saw Mohamed cutting corners on the Bel Air property.

“When I started with him, he wasn’t that way, but I wasn’t paying that much attention to city permits,” Linch said. “He got bolder and bolder as he got these massive loans and his ego just exploded. I stopped when he went crazy on Strada Vecchia. He went crazy doing whatever he wanted.”

With the recent unraveling of his Los Angeles real estate empire, Mohamed, who has more than 1.3 million Instagram followers, appears to have lost tens of millions of dollars in construction loans, and owes millions more to a host of builders.

His half-built $100 million Bel Air mega-mansion was demolished recently, after a five-year fight with neighbors over safety concerns.BACKGRID

He told a judge two years ago that he was too broke to demolish the Strada Vecchia property on his own and facing $60 million in losses. The shell company that owns the property that Mohamed had said would “last forever” was forced to put it on the market for $8.5 million, but when it failed to sell at that price, it was auctioned off for $5 million last year.

The question is, is he really broke?

While the website Celebrity Net Worth lists Mohamed’s holdings at $5 million, far below that of his famous daughters Bella ($25 million) and Gigi ($29 million), a former business associate told The Post that it’s “impossible” to estimate his actual net worth.

“Depends who you ask,” said Linch, who heads RAL Design Management, a Valencia, Calif., company that helps homeowners build lavish homes. “On court documents he says he has little money … No one will ever know.”

Website Celebrity Net Worth lists Mohamed’s holdings at $5 million, far below that of his famous daughters Gigi (left) at $29 million and Bella (right) at $25 million.Getty Images for Victoria’s Secret

He is reportedly living in a $4.5 million “cottage” in Beverly Hills — which is modest in comparison to his previous home, a 30,000-square-foot Bel Air estate officially known as Le Belvedere, but jokingly called the House of Hadid. Mohamed sold the home, which he had built, for $50 million in 2010 but stayed on as a tenant for several years. He lived there with his now-ex-fiancée, Iranian model Shiva Safai.

Mohamed’s love of luxury is well-documented.

He’s known for tooling around Beverly Hills in his collection of classic vehicles, including a chrome green Charles Morgan three-wheeler, Packard convertibles from 1929 and 1956, and a Rolls-Royce.

The doomed Bel Air mansion featured a 70-seat IMAX theater, marble floors and walls, a 12-foot-long bar, a Turkish bath, and a wine cellar with room for thousands of bottles.

“My dad didn’t grow up with a lot at all, so to be very grand with everything he does — this was his way to make his father in heaven proud,” his daughter Bella explained in her April 2022 Vogue cover story.

Despite his financial woes, Hadid is known for tooling around Beverly Hills in his collection of classic vehicles, including this Morgan three-wheeler.BACKGRID

Mohamed Anwar Hadid, a Palestinian Muslim, was born in Nazareth in 1948. While still an infant, his family was forced to flee to Syria during the 1947-1948 Palestine War. They moved to Jordan, Tunisia and Greece before settling in Washington, DC, where his father got a job with the Voice of America as a writer and translator. Mohamed studied engineering at North Carolina State University and MIT, and began his career selling vintage cars, among other things.

After a foray running a nightclub in Greece, Mohamed returned to the US and began to invest in real estate in the 1980s. Jim Zelloe, a Washington, DC, attorney who has worked with Hadid for decades, said that even when the chips were down, Mohamed “was always looking at tomorrow.”

“I’ve worked with him for decades, and the way he goes forward is to turn a negative into a positive,” said Zelloe.

“My dad didn’t grow up with a lot at all, so to be very grand with everything he does — this was his way to make his father in heaven proud,” his daughter Bella explained in her April 2022 Vogue cover story.Vogue

In 1987, New York developer Donald Trump sued Mohamed over his plans to build a resort in Aspen, Colo., because they collided with his own plans to build a massive Trump Palace hotel in the same area. Mohamed eventually won the Rocky Mountain resort court battle to build his property. But, according to the Times of London, he suspected Trump associates tried to smear him in a racist campaign — putting together a cover for a local newspaper that showed him riding a camel and leading a harem “as if I just came from the desert” with the sign “Welcome to Hadidville.”

In 1992, he divorced his first wife, Mary Butler, with whom he has two daughters, Alana — now 37 and a fashion stylist — and Marielle, 41, a sunglasses designer.

That same year, Mohamed took time out from his real estate career to train in speed-skiing for the 1992 Winter Olympics, becoming Jordan’s only competitor in the winter games. (He did not medal.)

In 1994 he wed Dutch model Yolanda Van den Herik, now famous as one of the “Real Housewives of Beverly Hills,” on which Mohamed has appeared — portrayed as Yolanda Hadid’s massively rich ex — despite them splitting in 2000.

He is reportedly close with his and Yolanda’s three photogenic children, Gigi, 26, Bella, 25, and son Anwar, 22, who also works as a model.

Bella told Vogue how staying at her father’s homes while growing up “wasn’t super comfortable for me.” Mohamed would build a house, sell it, and then bounce to the next, leading his kids to feel they had a “borrowed life” — their rooms could never have stuffed animals or family photos on display, as they essentially stayed impersonal for potential buyers.

Linch, who stopped working with Mohamed in 2015, told The Post that despite their differences, “I’ve learned a great deal from him about building luxury properties.” But Linch also claimed that Mohamed owes him tens of thousands in unpaid bills.

In 1992 Mohamed took time out from his real estate career to train in speed-skiing for the Winter Olympics, becoming Jordan’s only competitor in the winter games.GC Images

He said the developer has a hard time keeping staff because he is often late paying their wages.

“He’s a really nice guy, but when he took so long to pay, people would just leave,” Linch said.

Mohamed did not respond to a request for comment.

Linch called the whole process of building the Bel Air mega-mansion “devastating,” and claimed that Mohamed doubled the square footage on the property to 30,000 square feet largely to secure larger loans from the banks he was working with.

Bella told Vogue how staying at her father’s homes while growing up “wasn’t super comfortable for me.”Getty Images for Victoria’s Secret

“He admitted to it and that’s why all his loans were called,” said Linch. “He took a huge gamble because he needed the money.”

Mohamed not only faced the ire of the banks, but was pilloried by local residents and environmentalists over his plans for Franklin Canyon, a development he had been planning since he began acquiring the six parcels of land in the area in 2003, Zelloe said.

“In 2018, he started near my house, and the whole neighborhood went nuts,” Steven Weinberg, an attorney who lives in nearby Coldwater Canyon, told The Post. “It was like a blitzkrieg army that attacked the hillside and obliterated it.”

“I have seen the construction of homes in this area, but I have never witnessed the apocalypse that occurred in our neighborhood between June and August 2020,” said Weinberg in court papers.

But after Mohamed reportedly defaulted on a $25 million loan, Franklin Canyon’s rolling hills — home to the lake where the opening of “The Andy Griffith Show” was filmed — may be safe from developers in the future. A company called Give Back LLC became the primary creditor with a claim of $33.5 million on the property last week, according to a report in the Real Deal. The entity, whose funding was not revealed, intends to preserve the land as a public park.

“He is going through a whole lot right now,” said Linch of Mohamed. “I don’t really know where his mind is at.”

Jim Zelloe, who worked closely with Mohamed (above) on some of his biggest deals, said it’s unlikely Mohamed is ruminating on his losses.GC Images

Zelloe, who worked closely with Mohamed on some of his biggest deals, including building several Ritz Carlton hotels, said it’s unlikely Mohamed is ruminating on his losses — he already has several other developments planned around the world.

Mohamed has floated plans for a luxury high-rise in Casablanca, Morocco, and has interests in Egypt, where he is reportedly behind a giant, luxury apartment complex — said to be the world’s largest — in Cairo.

“He’s an extreme visionary,” said Zelloe. “He looks at things and see things no one else can dream of.

“He never gets into anything over his head,” Zelloe added. “People used to write him off and say that he was done, but he lives and breathes business opportunities, and he’s a master of formulating strategies in litigation and acquisition.”