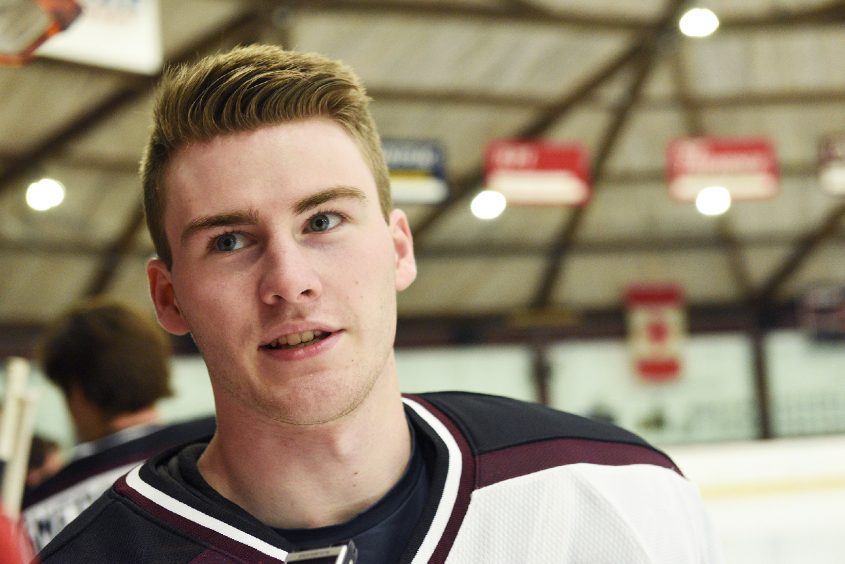 They won’t be, but how they clinched home ice for the first round of the ECAC Hockey tournament was certainly strange.

Liam Robertson scored an empty-net goal with 1:15 left in overtime Saturday as the Dutchmen, who collapsed late in the third period for the second time in two weeks, managed a 3-2 senior night victory over Dartmouth at Messa Rink.

The win, worth two points, clinches the seventh seed for the Dutchmen (9-11-2, 27 points, 12-17-4 overall). They will either play Brown or Princeton in the best-of-three series starting Friday at Messa. Brown finished its season with 25 points and is in ninth place. Princeton is in 10th place with 23 points, but it has a home game against Harvard at 4 p.m. Sunday. If Princeton loses, it will face Union. If Princeton gets a three-point regulation win or two points for an overtime or shootout victory, Union faces Brown. If Princeton ends up tied with 25 points, Princeton wins the tiebreaker and finishes ninth.

“We talked about that this week [and] actually this morning,” Ronan said. “We wanted to give them another weekend at home. [Messa] is a special place to play. We had a great atmosphere the past two nights. We’re excited to do it again.”

How they won it will be talked about for a while.

Then with 2:42 left in the 3-on-3 overtime, Dartmouth called timeout. Big Green head coach Reid Cashman, looking to improve the team’s playoff positioning with a winning goal, called a timeout and pulled goalie Clay Stevenson for an extra attacker. Union then called a timeout to talk things over.

Kosack cleared the puck out of the Union zone. Robertson raced down the left wing, caught up to the puck in the Dartmouth left circle and put it into the net.

“I don’t think I’ve seen that before,” said Estes, who admitted to being stunned by it. “When you’re in the moment, it is what it is.”

Dartmouth associate head coach and former Union associate head coach Jason Tapp confirmed Cashman’s strategy. The Big Green finished tied for 11th with Yale, but won the tiebreaker. They will be back in the Capital Region next weekend when they take on sixth-seeded RPI at Houston Field House.

“We were hoping to get to that 10th spot and just improve our seeding,” said Tapp, who stayed around to watch the Senior Night ceremony.

Union took a 1-0 lead on a second-period shorthanded goal by Owen Farris. He had just come off the bench when Estes fired the puck from the Union left circle. Farris beat Stevenson between the pads.

The score stayed that way until there was 3:14 left when Collin Graf fired a wrist shot from the slot over Stevenson’s glove side for an apparent insurance goal.

But then the Big Green scored those two extra-attacker goals, something the Dutchmen need to clean up heading into the postseason.

Ronan was still shaking his head about it, even though the Dutchmen pulled out the win.

The Dutchmen will find out around 6:30 p.m. Sunday whether they will be hosting Brown or Princeton. It doesn’t matter to them which team it is.

“At the end of the day, we play for us and stick to our game plan,” Ryan said. “Whoever it is, we’re obviously going to do our scouting report and whatnot. We’re ready to go.”

Henry Thrun scored twice to lead Harvard to a 5-1 win over RPI at Houston Field House.

The Crimson scored four times in the first period.

More from The Daily Gazette:

Ruben Randall - October 16, 2021 0
Actress
Katherine McNamara was not just interested in the possibility of a virtual Shadowhunters reunion. She also signed up for Untitled Horror Movie.The horror-comedy...