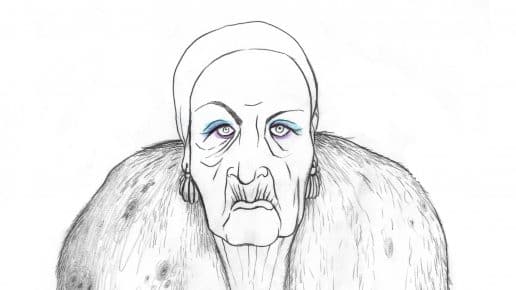 Impossible Figures And Other Stories I is at once the opening and chronological conclusion of Marta Pajek’s triptych. That looping schedule is perhaps indicative in works where geometries connect in ways geometries cannot.

From the opening explosion to the city that remains, the old woman’s passage through streets that have been abandoned, not just left to the angels but left without angles. Her eyes a splash of rare colour, her hands an opening to unlock structures built not by but of people. Aleksandra Gryka’s music and in particular Michael Jankowski’s sound give heavy tread to silences. “now you only see them in shop windows” but they had palpable flesh in their black and white lines. The curves of cast concrete windows make them visible but “did they want to listen?”

Echoes of other visions. The single visible eyelashes, the endless corridors. A pestilential murmuration fills the sky and screen while aged hands comb unliving hair. The pavement blisters, varicose beneath the paving. From the bus stop the swamp. From the bath tub the swell. Parts II and III were perhaps even more concerned with hair and bone and skin and teeth but reed and rain and wrinkle here assemble. “Where have all the flowers gone?” is a question that both cannot and will be answered.

Pajek’s animation is striking, pencilled lines and negative spaces creating something distinctive and delightful. Her willingness to have screens blank, white, black, is the logical extension of the simplicity of her lines and framing. The complexity of ending at the beginning is also testament to the ambition of her works.

In a pre-recorded Q&A at 2022’s Glasgow Short Film Festival she explained that the project had bene “planned from the beginning”. While she wanted to create a larger work, the filmic language she wanted to use didn’t fit with the spaces of a mid-length or feature film. Hitting upon the idea of the impossible figure she thought of three films that explored the problem in different context. Writing the stories “one after the other”, and with “part one” “the last one to be written” she found herself lacking energy. After completing parts two and three she returned to the storyboard, so while “all parts were written” in advance the act of revisiting makes perhaps the trio into a Penrose triangle, connecting to and above and again all at once.

In the discussion there was mention of it within the context of the Russian invasion of Ukraine, which places the conversation at 10AM on the 24th of February almost exactly one month before the festival. To determine that from festival director Matt Lloyd’s mantlepiece was made easier by the sunlight from outside. That in a discussion about “contexts, historical contexts” and its impact on Pajek’s perception of the story. Talking about how her daughter was born during production and how it changed her feelings about not just wisdom but connection to the future. While stylistically uniform the years between them have added different layers. That’s echoed in the use of a song made famous by Marlene Deitrich, but written by Pete Seeger and based, it appears, on a Cossack song. That accretion of detail can be more literal in film, for example Dad’s Stick, but here as with the animation each line creates an implication of space behind it.

That act of visual translation from nuance was matched by deeper discussion of the distinctions between the versions of the song. While there is a version in Polish the German lyrics place different weight. That this occurs in a film motivated by “the feeling of frustration when you’re looking at a simple figure that is impossible”, “that altogether it doesn’t make sense” adds further metaphoric weight. Things that “should be simple and easy to handle” but are not serves as starting point. One ably, amply, and satisfyingly explored. The temptation is, as with any other such paradox, try to solve it. Easier to, as in the film, allow it to wash over you, to be consumed within it.