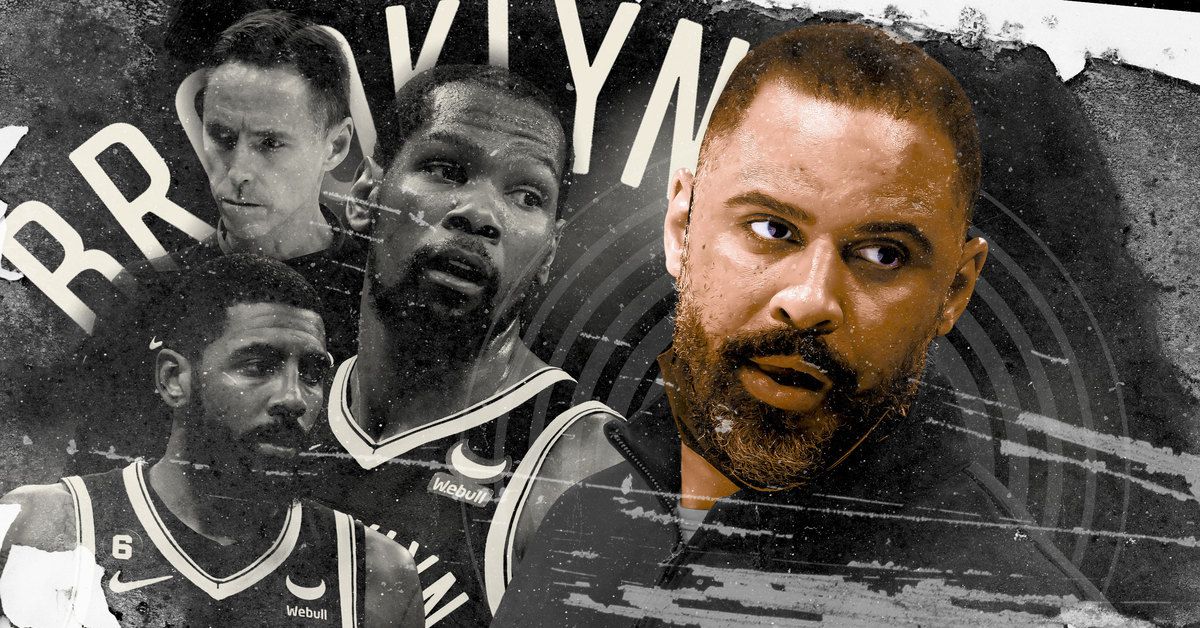 The Brooklyn Nets aren’t just the greatest shit show in the NBA, but a shit show so colossal as to have its own gravitational pull—to perpetuate bizarre decisions in a kind of relentless feedback loop, turning bad to worse to truly inexplicable. To wit: Before the ink could even dry on Brooklyn’s statement announcing it had parted ways with head coach Steve Nash on Tuesday—much less confirm Jacque Vaughn (or anyone else) as the acting coach for that night’s game—it was reported by ESPN and The Athletic that suspended Celtics coach Ime Udoka, who is currently serving an unprecedented season-long ban for an improper relationship within the Boston organization, would soon be hired as the Nets’ next head coach.

General manager Sean Marks, naturally, denied that a decision about Nash’s replacement had been made just a few hours later.

Should Udoka eventually (and perhaps inevitably) land the job anyway, he’ll inherit a talented team off to a 2-5 start whose best player asked to be traded in the offseason and whose second-best player, among so many other mystifying behaviors, recently directed his social media following to a film with overtly antisemitic messaging and then abdicated any responsibility for doing it. Brooklyn also happens to be playing miserable, uninspired basketball; a late-game rally to slip past the lottery-bound Pacers on Monday didn’t change the fact that the Nets have taken their superteam concept to pitiful lows this season, underperforming every team in net rating save for the rebuilding Pistons and Rockets.

Hiring Udoka would be the organization’s clearest sign yet of its willingness to win at any costs—including potentially those that brought another franchise to banish Udoka for inappropriate behavior after he had just led them to the NBA Finals. According to TNT’s Chris Haynes, the Celtics won’t even seek compensation from a division rival hiring away a coach they technically still have under contract. The Nets will be free and clear to give him Nash’s old job, and to move on with the next phase of this odd, spiraling quest for a title.

The question of whether Udoka can even help a team as messy as the Nets flies right past the matter of whether he should even be in a position to do so. The story of Udoka’s exact transgressions is effectively still being written, in the public-facing sense. There’s a lot of vague language. There’s reporting of an independent probe into the incident that led to his suspension, and a lot of fuzzy suggestion around the process that actually led the Celtics to remove (and all but fire) their head coach. The ethics of even hiring Udoka are thorny and unclear, to say the least—and to say nothing of inviting the subject of a massive, intra-organizational scandal to make sense of another chaotic situation. There is clear, telegraphed intention in hiring a coach who has previous experience with all of the team’s principal stars, whether as an assistant with the Nets under Nash in 2020-21 or the Sixers under Brett Brown the season prior. It still amounts to attempting to solve one calamity with another, all in the name of saving what looks to be a pretty soulless endeavor.

What would even be the point? Replacing Nash does technically satisfy part of Durant’s offseason ultimatum to the franchise, though Marks, whom Durant also demanded be fired, will now hire the team’s fourth head coach in six seasons and change. Regardless, the daunting reality for Brooklyn is that Durant has been amazing this season and the team has been awful anyway. There’s just no real evidence that this Nets team is really worth saving. Over the last two seasons, any progress Brooklyn made was unsettled by a steady cycle of injury and discontent, complicated further by the addition of one of the most perplexing stars in the sport. For a time, the Nets’ issue was that they had traded away a critical player in James Harden but didn’t yet have Ben Simmons, who sat out all of last season due to some combination of a trade holdout, mental health considerations, and a back injury. Now the Nets actually have Simmons in the lineup, and their new concern is figuring out how to not get blown out during his minutes on the floor.

Irving, meanwhile, has found a new and especially callous way to destabilize a franchise—so flagrant that the NBPA itself, for which Irving serves as a vice president, felt compelled to issue a public statement denouncing antisemitism in the wake of his comments. Team governor Joe Tsai effectively did the same, though at least he had the nerve to call out Kyrie by name. That’s where the Nets are. One of the team’s best players is feeling defensive about the idea that he shouldn’t thoughtlessly share a movie rooted in Holocaust denial and fabricated “Adolph” Hitler quotes, and thus refuses to back down or explain himself in any capacity. Life simply continues apace for the league’s freest thinker, who wants only to play basketball (or not) and be left alone the next time he decides to recirculate some choice material from Alex Jones.

This isn’t even a case where a high-performing team has gone to great lengths—and made obvious compromises—to justify its own continued existence. The Nets are reportedly hiring Udoka, placating Durant, trying to work in Simmons, and giving Irving cover all for the sake of a group that hasn’t actually won anything, and hasn’t shown much evidence that it could. Everything is on spec; the Nets have spent three years operating on the pretense of what they could be rather than what they are, and the result is a rudderless operation grasping desperately at whatever quick fix is within reach. There’s no room to backtrack at this point. No real, alternative course. This is a franchise that is utterly committed—one that made baffling choice after baffling choice until it had nowhere else to go.

See also  What was John Lennon’s Net Worth When he Died?

Charlie Puth Agreed With Elton John That His Music ‘Sucked’ Even...