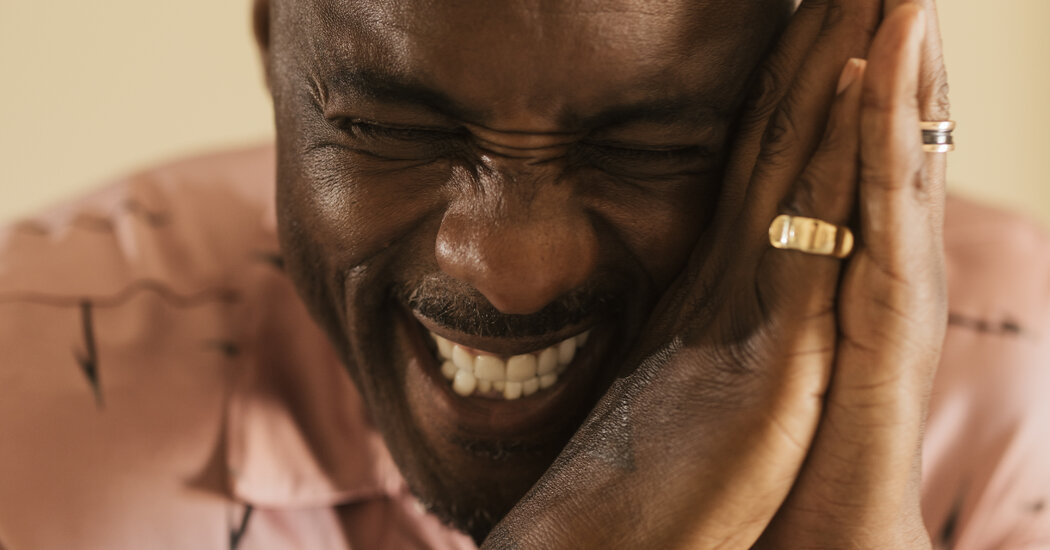 When Idris Elba takes on a new role — whether it’s fictional like Stringer Bell on “The Wire” or historical like Nelson Mandela in “Mandela: Long Walk to Freedom” — he usually has some degree of reality on which to base his performance.

That was not the case with his latest character, a surly red cartoon echidna named Knuckles.

As Elba explained in a video interview on Tuesday, “I’ve never met any short, fluffy guys with big fists. I’m sorry, that’s not my experience. Maybe you have, but I haven’t.”

To a generation of gamers, Knuckles is best known as the rival of Sonic the Hedgehog, the high-velocity star of the long-running Sega franchise.

The hit 2020 film based on the game, with Ben Schwartz voicing Sonic and Jim Carrey as his human nemesis, Dr. Robotnik, successfully translated the video-game series into a movie franchise that blended live action with animation.

That’s partly because Elba, 49, is a dedicated fan of video games, and partly because he (like the author of this article) is the father of a 7-year-old son, and he was eager to make some movies they could share as a family.

As Elba explained, “You and I remember those first early games and now here we are — our sons are like, ‘Wow, I can see “Sonic 2” with my dad.’ That’s special.”

(Even so, when I mentioned that my son and I have also bonded over video games, Elba warned: “Is he into Minecraft and Roblox? Be careful. Be aware. You might lose your child.”)

Elba spoke further about his history as a gamer and the range of inspirations for Knuckles, including the actor’s own parents. These are edited excerpts from that conversation.

Were you a gamer before you made this film?

One hundred percent. I literally have my Switch in my bag. When I started off, I had a Commodore 64 [a 1980s-era home computer]. Dude, that’s how far it goes back for me. And then when I could afford one, I had a Sega Genesis. And I’ve pretty much had every single console since then. I’m a grown man now, but I still play FIFA and driving games.

I started out on a Commodore 64, too. It had a reputation for having software that was incredibly easy to pirate.

Well, it’s funny you say that. I remember you could take a blank tape and dub a game onto it. And you had to take the tabs off the cassette so you didn’t record over it. [Exaggeratedly serious voice] But of course, all my games were authorized purchases, I bought them all.

How did the role of Knuckles first come up for you?

I’ve done voices in animation and I like doing things for a younger audience. But when my agent called with this, he didn’t even get to finish his sentence. I was like, yes, absolutely.

You have a whole body of work that your 7-year-old son can’t see yet. Was it important that you do something you could share with him?

[Laughs] There’s a lot of stuff my kid won’t be able to see until he’s an adult, and then he can judge me. My daughter’s 20, and she’s lived with me doing earlier work like “Finding Dory.” So it is a really satisfying feeling for my son to see me do something, too.

What did you and the director Jeff Fowler discuss about Knuckles in your first meeting?

We did try out some voices to figure out what he might sound like. He looks sort of menacing — [exaggeratedly flexes arms] rarrrr. I actually wanted to try to play him with a squeaky voice. I thought that might be funny. But they didn’t think that was funny and that idea got nixed immediately. [Laughs] But we did try different voices, cadences, accents. Knuckles isn’t a big talker, but when he does speak, he’s very blunt.

You recently made the western “The Harder They Fall.” Was a villain like Rufus Buck still in your head when you were figuring out Knuckles?

Not “The Harder They Fall,” but my character in the Marvel world, in the “Thor” films, Heimdall, there’s a sense of symmetry between those two voices. Look, I’ve got a deep voice and I could just use my voice as it is. I didn’t consciously want to sound like Heimdall too much. But probably, yeah, they sound exactly the same. [Laughs]

It felt like you had a specific idea for where Knuckles came from and how you wanted him to sound. How would you explain it?

The first thing that we observed was, he comes from an ancient world — he’s a warrior from his tribe and English is not their first language. He doesn’t have a sense of humor in the same way Sonic does. He’s very dry and matter-of-fact, and he uses English just to get his point across and move on. He hasn’t got time for niceties. We used that construct as a way to start to develop what he sounds like.

Have you encountered people in real life who are very focused and intense about their goals, but perhaps need more help in personal situations or don’t fully grasp sarcasm?

I work in an industry where there’s a lot of instructions being passed left and right — do this, do that — and often the efficient people are the ones who are like, Hey, let’s just get this done. My parents are West African — they moved from Freetown, Sierra Leone, to London in the early ’70s. So when English isn’t your first language and the culture’s different — the English sense of humor, it goes over a lot of people’s heads — I’ve been witness to that.

Growing up in London, did you feel like its culture and customs came more organically to you than to your parents?

I was born there, so I didn’t recognize that until I was old enough to understand that English culture was not their culture. I remember feeling that. My mom would say, “Back home in Africa, we do things like this.” And I’d never dare say it, but I used to think, We’re not in Africa — we’re in England. That was the beginning of my understanding of that culture clash. But I’ve been to Africa a few times, and I remember going to Sierra Leone and recognizing all this cultural stuff that I’d seen all my life but didn’t know where it had come from. And there it was, in the origin of my parents. It was fascinating.

Do you prefer a voice-only role like Knuckles to your other past performances that have involved motion capture?

Not necessarily. Motion capture is such a fascinating art and discipline on its own. In this one, there would be no benefit to having any of my facial features for Knuckles. It wouldn’t make any sense.

So you haven’t necessarily soured on it after your experience with “Cats”?

Thank you for leaping from hedgehogs to cats. I see what you did. From a performance perspective, it is an incredible experience, being a feline. That’s something I’ve experienced and never have to again. That box has been checked.

Paramount has been candid that they’d like to do even more with Knuckles, including another “Sonic” movie and his own TV series. Was that part of the appeal for you?

It is now. Honestly, when I got it, I didn’t even know that would be on the table. I thought I was just doing one movie. But now, the fact that I can probably get to play more Knuckles and maybe even spin off into his own world is great.

There is another film franchise that people would love to see you participate in, that we’re all waiting expectantly to hear about. Is it still a possibility for you?

You know which one I mean? The spy with the gun?

I’m not sure what you’re talking about.

He’s got a famous code name with digits —

He’s got digits? Knuckles! Knuckles has digits. No guns.

Is it safe to say we won’t be breaking any James Bond news in a conversation about Sonic the Hedgehog?

Noooooooo. No. I’m sorry to disappoint.

Putting that aside, would it surprise you if, many years from now, the roles you are best known for are, say, Stringer Bell, Nelson Mandela and Knuckles?

I think for any actor, the dream is to be able to play different roles and not be pigeonholed, and I feel like I’ve been lucky to have that as a career. But it is interesting. I was on a radio show, and they were like, [booming radio announcer voice] “He’s played Luther. He’s done ‘Beasts of No Nation.’ And now: He’s Knuckles.” It’s like, uh, maybe you could say he’s played a seal in “Finding Dory” and a buffalo in “Zootopia,” he’s played a cat. And now he’s Knuckles. That lineup seems a bit more apt. To go from Nelson Mandela to Knuckles is a bit of a reach.

Are These the Richest Celebs Who Own Private Jets? Let’s Look at Their Net...

Daniel Radcliffe is unrecognizable in photos from the set of Weird...

Ruben Randall - February 21, 2022 0
Actor
Daniel Radcliffe is done with wizards. After finishing the Harry Potter series, the actor has had various weird and wonderful roles – and...

35 years ago, a Stephen King sci-fi movie launched a new...