Vin Scully’s death last week prompted a remarkable outpouring of sentimental remembrances from legions of people who took pleasure in listening to his evocative play-by-play broadcasts over 67 years from Brooklyn to Los Angeles. His career encompassed more than 10,000 games, and in each of them he vividly expressed his love of baseball.

My family welcomed Scully’s friendly voice into our home when the Dodgers moved to L.A. in 1958. I was 11 years old and, of course, had the transistor radio under the covers at bedtime.

Something about the way he spoke told you that Scully was a kind and gracious human being. Everybody who had a personal interaction with him will tell you that was so.

I have written proof of his magnanimity.

Scully’s 50th year as the Dodgers’ announcer began with their season opener at home in 1999. I decided to write a review of his broadcast. The game went 11 innings, the Dodgers defeating the Arizona Diamondbacks 8-6, and Scully made it entertaining throughout.

He was not one to discuss world problems, but when the “doves of peace” took flight during a pregame ceremony, Scully remarked, “Unfortunately, they haven’t been very effective.” That said, he dove into the game. He was fascinated with Arizona pitcher Randy Johnson, who threw a sharp breaking curve that “darts in like a rattlesnake’s head.” He tapped into cinematic culture when he said, “Every time I see Randy Johnson with that long hair I think of Deliverance – remember that movie? Well, right now, he’s trying to deliver.”

Such gems poured out of Scully all afternoon, and when I pieced together my column for the News-Press, I realized that he was its co-author.

A week later, an envelope postmarked from Arizona, where the Dodgers were playing the Diamondbacks in another series, arrived on my desk. Inside was a handwritten letter from Vin Scully. A reader had sent him a partial copy of my column, and he wrote to me that he was “most appreciative of your kind words.” I immediately sent him the missing “jump” of the column, and he replied with another note of gratitude.

Those missives are among my most treasured mementoes. It was as if Rembrandt had personally thanked me for admiring his painting. I thank you, Vin Scully, and may you rest in peace.

LIKE FATHER, LIKE SON-IN-LAW:  On Monday, August 8, Bill Bertka celebrated his 95th birthday in good health, indicative of good genes and an active lifestyle. The longtime Santa Barbara resident will begin his 43rd consecutive season in the employ of the Los Angeles Lakers next month. It will be his 54th year as a scout, coach or executive in the NBA — a tenure that pales only next to Vin Scully’s. His current title is “special assistant to the general manager and consultant.” 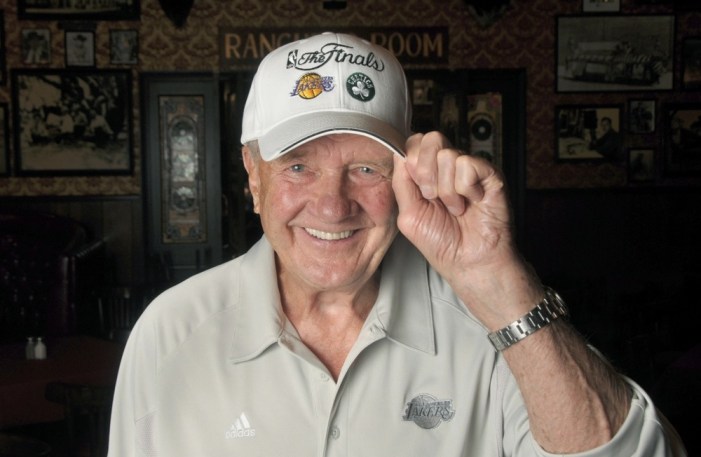 Bertka has played a part in 11 NBA championship seasons with the Lakers. He most values the seven rings he earned as an assistant coach alongside Bill Sharman, Pat Riley, and Phil Jackson.

Bill Pintard, who is married to Bertka’s daughter Kris, is closing in on his father-in-law’s record. Pintard is manager of the Santa Barbara Foresters, and last Saturday, they claimed their 10th National Baseball Congress World Series championship, defeating the Hays Larks by a 12-1 score at Wichita, Kansas. It was the collegiate baseball club’s third consecutive title, adding to their lore as the winningest team in the history of a tournament that began in 1935.

“It’s amazing what Bill has accomplished for this city,” Bertka said.

SPEAKING OF WINNERS:  Bill Russell could not beat his own mortality, but he won everything else. He led the Boston Celtics to 11 NBA crowns in 13 years, frustrating the Lakers seven times in the finals. “I watched him in high school, college [two NCAA championships at USF], and the pros,” Bertka said. “His attitude toward competing was extraordinary. He affected the game by doing what other people didn’t want to do.”

Bertka also respected Russell’s outspoken commitment to social justice. “He believed in what was right for people, even though he drew a lot of criticism. He was serious about life. At the same time, he was a fun guy to be around. He liked to laugh.”

ZAMPESE HONORED:  Like Bertka, Ernie Zampese was a longtime assistant coach. He did his work as an offensive coordinator in the NFL, including a spectacular stint with the San Diego Chargers during their “Air Coryell” years. Zampese was the architect of the Dallas Cowboys’ offense when they won the Super Bowl in 1995.

The Pro Football Hall of Fame decided to honor “behind-the-scenes” contributors — assistant coaches, trainers, equipment managers — with Awards of Excellence that are put on display in the museum at Canton, Ohio. Zampese was among five assistant coaches named to the award this year. He lives in San Diego and was unable to attend last weekend’s Hall of Fame festivities in Canton.

Zampese was a football star at Santa Barbara High. In 1953, when he ran and passed for 33 touchdowns, he was named Southern California CIF Player of the Year. He went on to play at USC for two seasons. His college career was cut short when the Pacific Coast Conference barred him for taking a part-time job in violation of NCAA rules. Zampese revealed that the job was sweeping leaves for $1.50 an hour. In this era of NIL (name, image, and likeness) benefits, players will legally be banking millions of dollars during the upcoming college football season.

FINISH LINE:  John Brennand and Jim Klein are two men who created legacies in recreational and college athletics. Brennand ran his first marathon when it wasn’t cool and later organized popular marathons and road runs for the masses in Santa Barbara. The Independent named him a Local Hero in 2011. He died on June 30.

As a decathlete, Jim Klein finished fourth behind Rafer Johnson at the 1960 U.S. Olympic Trials. That year, Westmont College hired him as its cross-country and track-and-field coach. Klein built the Warriors into a small-college power and later coached at Boise State.

Westmont’s team in 1971-72 included Jean-Louis Ravelomanantsoa, a sprinter from Madagascar who was an Olympic finalist in 1968 and world-ranked in 1972. Klein and I traveled to the Munich Olympics in a VW van that he commandeered from a Westmont satellite office. It was a fabulous road trip through France, Switzerland, and southern Germany. At a country inn, we dined with a bottle of the greatest wine I’ve ever tasted — 1959 Chateau Mouton Rothschild. It cost 30 francs, about $7.

I shared that memory with Jim shortly before he died from cancer here on July 24. He made it to 90. Repose en paix.

Support the Santa Barbara Independent through a long-term or a single contribution.

Ruben Randall - September 6, 2022 0
Money
Introduction Dominic Cooper is an actor from England. In the Marvel Cinematic Universe, he is best known for playing the comic book characters Jesse Custer...