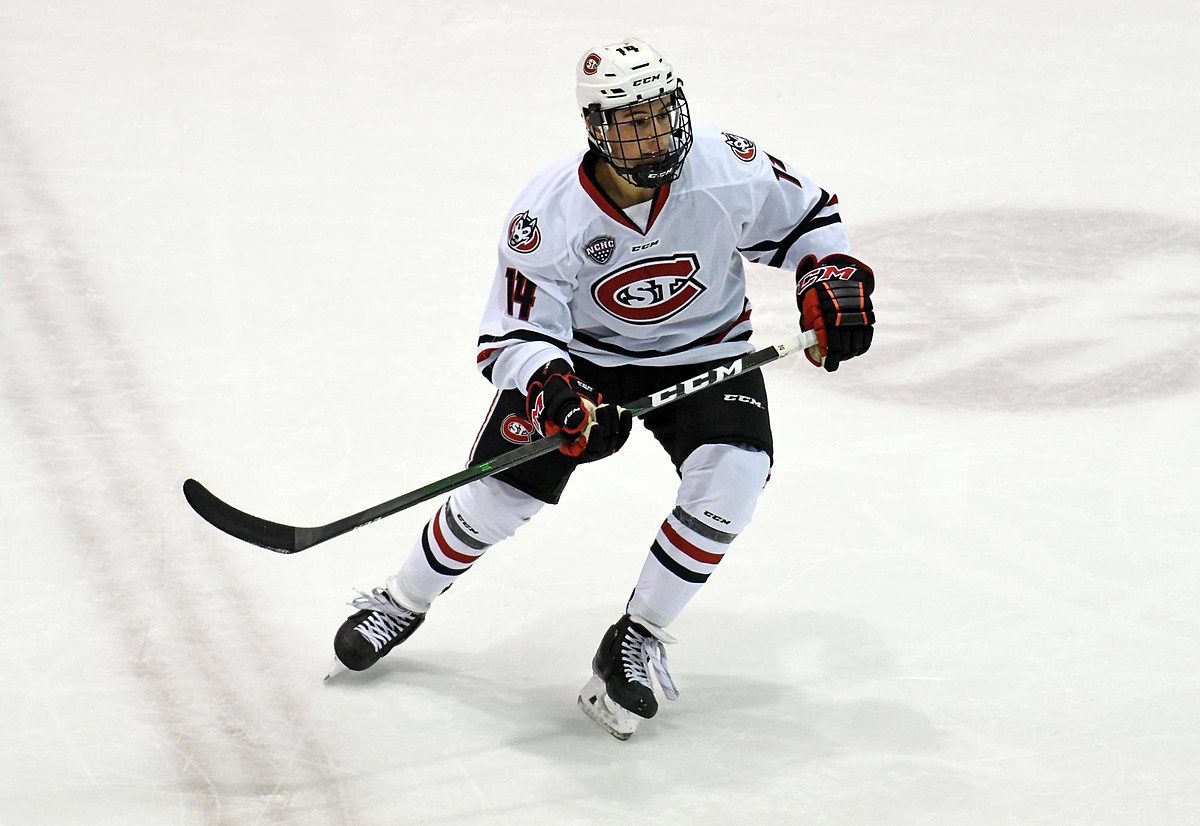 The SCSU men’s hockey team shut out Colorado College to earn a weekend sweep, the St. Ben’s hockey and basketball teams both notched MIAC wins, the St. John’s University football team dominated in round one of the NCAA tournament, the Bison topped UND in the Harvest Bowl, and the Minnesota Wild and Timberwolves both ended Saturday with another tally in the win column. The SJU hockey team ended the weekend with a tie, while the Gopher football team, Johnnies basketball team, Granite City Lumberjacks, and St. Cloud Norsemen all wound up in the loss column. On Sunday, the Gopher women’s basketball team will return home to host Presbyterian College, and the Vikings will host the Cowboys in an important NFC matchup.

– The no. 4/5 Huskies shut out the Tigers 5-0 on Saturday to secure the weekend sweep. Zach Okabe led St. Cloud with two goals. Dominic Basse made 36 saves in the win. The Huskies improve to 11-3 and will take the holiday week off before returning to the ice on December 2nd to host UND. Puck-drop is set for 7:30 p.m. at Herb Brooks Hockey Center.

– The CSB hockey team rallied to earn a 6-2 win over St. Scholastica to split the series. Emma Rooks led all scorers with three goals for St. Ben’s. Kate Moffat made 30 saves and allowed two goals. CSB outshot the Saints 46-32. The Bennies improve to 4-4 and will host UW-Superior on Tuesday.

– The CSB basketball team stayed undefeated with a 63-59 overtime win against St. Olaf on the road. Carla Meyer led all scorers with 18 points for St. Ben’s. Sophia Jonas tallied 15 points, and Tori Szathmary added 14 points and 13 rebounds. The Bennies improve to 2-0 and will host Gustavus on Tuesday.

– The no. 4 SJU football team shut out the University of Northwestern 49-0 in round one of the NCAA Division III Tournament. Aaron Syverson completed 19 of 23 for 204 yards and four touchdowns. The Johnnies improve to 10-1 overall and will host Wartburg in round two. Kick-off is set for noon on Saturday at Clemens Stadium.

– The Bison closed out the regular season with a 42-21 win over the Fighting Hawks in the Harvest Bowl. NDSU never trailed in the victory. Cam Miller completed 8 of 12 for 159 yards and tallied 16 carries for 93 yards and five of the team’s six touchdowns. The Bison improve to 9-2. They now await their fate when the NCAA tournament bracket is announced on Sunday.

– The Wild snapped a three game losing streak with a 2-1 win over the Hurricanes. Sam Steel and Alex Goligoski each scored a goal for Minnesota. Filip Gustavsson made 20 saves and allowed one goal in the win. The Wild improve to 8-8-2 and will host Winnipeg next on Wednesday. Pre-game coverage starts at 5:45 p.m. on AM 1390 and 93.9 FM Granite City Sports.

– The Timberwolves won their third straight, beating the 76ers 112-109 on the road. Minnesota outscored the home team in the first three quarters of the game and held off a rally in the fourth. Joel Embiid led all scorers with 32 points for Philadelphia. Anthony Edwards led the Timberwolves with 25 points. The Wolves improve to 8-8 and will host the Heat on Monday night. Pre-game coverage tips off at 6:30 p.m. on AM 1390 and 93.9 FM Granite City Sports.

– The SJU hockey team tied St. Scholastica 2-2 to complete the weekend series Saturday. Joe Papa and Nick Michel each scored a goal for St. John’s. The Johnnies are now 4-2-1 and will visit the Milwaukee School of Engineering on Friday.

– The Gophers surrendered a late field goal and fell 10-13 to Iowa in their final home game of the regular season. Athan Kaliakmanis completed 7 of 15 for 87 yards and an interception. Mohamed Ibrahim had 39 carries for 263 yards and one touchdown. The Gophers fall to 7-4 and will end their regular season with a trip to Madison to face the Badgers at 2:30 p.m. You can catch all the action on AM 1240 and 95.3 FM WJON.

– The Granite City Lumberjacks were handed a rare loss, 1-4 Saturday at the hands of Alexandria. Ashton Collings led the Blizzard with two scores, while Jacob McPartland netted the lone goal for Granite City. The Lumberjacks fall to 17-1-0-1 and will host New Ulm on Wednesday night at 7:30 p.m.

– The SJU basketball team came up short 73-62 against St. Olaf on the road Saturday. Nathan Hendler led all scorers with 18 points for the Oles. Ryan Thissen was the only St. John’s player to score in the double digits with 13 points on the day. The Johnnies fall to 2-2 and will visit Gustavus at 7:00 p.m. on Tuesday.

– The Norsemen dropped a close one 3-4 to Minot on Saturday, getting swept in the weekend series. St. Cloud outshot the Minotauros 34-23 in the loss. Tyler Dysart, Blake Perbix, and Broten Sabo each lit the lamp once for St. Cloud. The Norsemen fall to 8-10-1-1. They will host the Central Division leading Austin Bruins (13-2-1-3) on Wednesday at 7:00 p.m.

– Although considered the underdogs in the matchup, the Vikings will look to earn their eighth straight win when they host the Cowboys on Sunday afternoon. Dallas has six players listed as questionable including running back Ezekiel Elliot and former Viking LB Anthony Barr. Minnesota will be without Akayleb Evans and Dalvin Tomlinson, while Za’Darius Smith is listed as questionable, and Christian Darrisaw and Justin Jefferson no longer have injury designations. Cameron Dantzler remains on IR, and Andrew Booth Jr. is set to make his first career start at cornerback. Dallas is undefeated through three games at U.S. Bank Stadium but blew a 14-point lead in the final quarter to Green Bay last week. Minnesota is 4-0 at home so far this season. Pre-game coverage kicks off at 2:30 p.m. on AM 1240 and 95.3 FM WJON.

– The Gopher women’s basketball team (2-1) will return home and look to return to the win column when they host Presbyterian College (2-1). This will be the first matchup between the two programs. Tip-off is set for 2:00 p.m.

LOOK: These Are the Richest NFL players

To uncover the richest NFL players, Stacker consulted Celebrity Net Worth and ranked them by their 2022 net worth, calculated using a proprietary formula.

Sometimes images are the best way to honor the figures we’ve lost. When tragedy swiftly reminds us that sports are far from the most consequential thing in life, we can still look back on an athlete’s winning moment that felt larger than life, remaining grateful for their sacrifice on the court and bringing joy to millions.

Ruben Randall - May 29, 2022 0
Celebrity
SEE all of the Teen Mom stars that have been FIRED over the years including Jenelle Evans, Farrah Abraham & Ryan Edwards. Teen Mom...