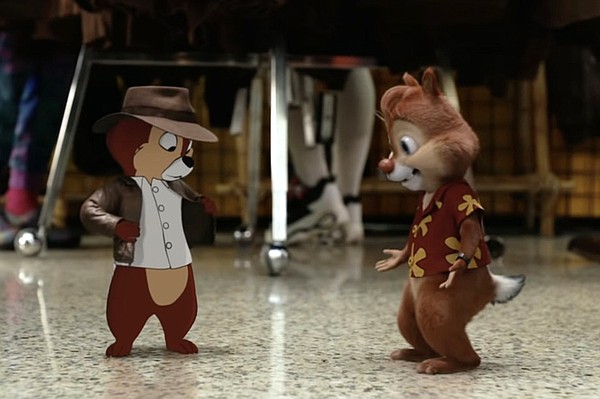 Disney continues to prove reboot is the name of its game, and since “DuckTales” already got one, it’s time for the second most famous chipmunks to get a turn. Only, instead of a straightforward revival, the House of Mouse chose to bring these characters back in the meta-style of “Who Framed Roger Rabbit.”

The result is a mixed bag of funny jokes, a gumball machine’s worth of cameos, and some questionable animation decisions. While it’s a net positive in the end, some viewers will be scratching their heads through this movie.

“Chip ‘n’ Dale: Rescue Rangers” takes the meta route with its sequel/reboot, establishing the earlier cartoon from the late ’80s and early ’90s as an actual television series in the world of this film. (The anthropomorphic chipmunk brothers actually debuted in 1943 as secondary characters in the short “Private Pluto” which starred Mickey Mouse’s mostly non-anthropomorphic dog.) Chip (John Mulaney) and Dale (Andy Samberg) were merely actors playing their roles on the popular cartoon.

In this world, cartoons and regular humans live side-by-side. And since Disney owns pretty much everything, they can pull from all sorts of properties to populate their world with lots of different characters from Baloo and Lumiere to Transformers and more.

Trouble strikes as different cartoons start disappearing, including Flounder from “The Little Mermaid.” The movie’s central plot is these cartoons that disappear undergo the animated equivalent of plastic surgery against their will and are shipped “overseas” where they’re trapped and forced to make bootleg movies. Think “The Little Fish Girl” instead of “The Little Mermaid.”

See also  What Is Ray J’s Net Worth? How Much Money He's Made

Things get personal for Chip and Dale when one of their buddies from the old days disappears after they get in deep with a cartoon loan shark. Suddenly, it’s up to these chipmunks to put aside a previous disagreement and work together to find their friend.

“Rescue Rangers” offers a funny story with lots of silly moments that’ll have folks laughing every 10 minutes or so. Some of the jokes and situations are wacky enough that they’ll catch viewers off guard entirely.

This works to the film’s advantage because, unlike “Who Framed Roger Rabbit,” the animation in “Rescue Rangers” can be distracting and even a little disappointing. The former had a full theatrical release budget in the ballpark of $50 million. Walt Disney Animation Studios handled the art with all the delicate care and attention of one of its own movies. The latter is a straight-to-streaming knockoff with the lackluster design budget to show for it.

Netflix may be losing subscribers, but the streaming giant still has years of original TV series and movies to offer customers. It had a pretty big head start on Disney+ in that category. Now, Disney is trying to bulk up its own original movies with offerings like “Sneakerella” and yet another reboot of “Cheaper by the Dozen.”

The calculation for these offerings seems to be “sink a few million into a subpar project and then market it as original content to entice subscribers.” And hey, Netflix has also done this for years.

But if “Rescue Rangers” was really going for this meta concept, maybe Disney should have given this movie the theatrical release and budget it deserved. It’s a problem when 2007’s “Alvin and the Chipmunks” has better animation than a film in 2022.

Chip’s 2D design is ruined because the film still tries to give him a 3D effect. And Dale’s 3DCG effect is downright terrifying in most shots because the chipmunk just doesn’t look like he was given the proper attention and care he needed to belong in this live-action and animation hybrid movie.

The most confusing part in terms of art is all the animated background characters and props look great. Most of them have much simpler 2D design, and when they move in their live-action environments, they provide a glimpse of what this film could’ve been in terms of artistic style. Going the live-action/hybrid route takes serious commitment to look good. Ralph Bakshi’s “Cool World” may not have been stunning, but it looked neat.

With all that said, it is ridiculously funny. Mulaney and Samberg do a solid job with their roles and help carry this film with wacky high jinks. So while it doesn’t look great, it’s hilarious, and that certainly helps.

What Is Rob McElhenney’s Net Worth? ‘Welcome To Wrexham’ Star Cashes In From TV...

Ruben Randall - June 2, 2022 0
Actress
While covering The CW’s Upfront 2022 Red Carpet, I had the pleasure of chatting with Katherine McNamara and Matt Barr about Walker Independence. The new...