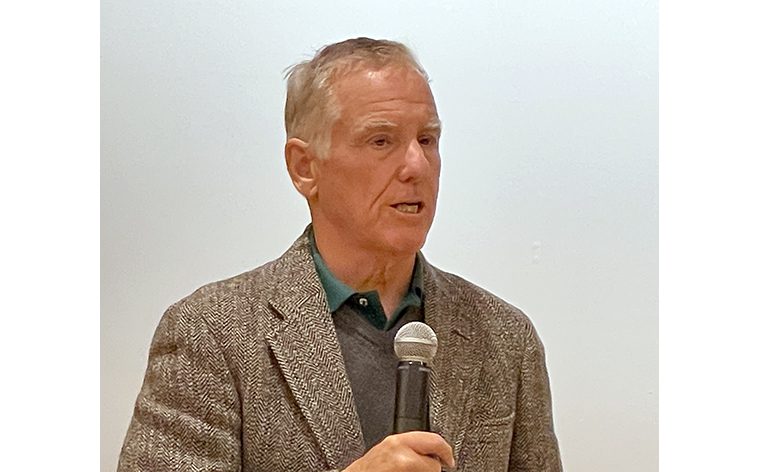 “I think we have an obligation here (to vote). You don’t get to be a citizen and be a freeloader. The minimum you can do is vote. And if you don’t vote, not only should you not complain, you’re undermining the country.”
— Howard Dean

MIDDLEBURY — Former Vermont Gov. Howard Dean on Thursday warned folks in Middlebury that eroding trust in the U.S. Supreme Court and the political practice of “othering” — or scapegoating — groups of people stand as the biggest threats to the survival of democracy in America.

But Dean, speaking before a group of around 60 people at the Champlain Valley Unitarian Universalist Society sanctuary building, also voiced optimism for the future, provided that younger citizens become more involved in the political process in a world that’s been rendered smaller by the internet and globalization.

“We desperately need to get younger people (to run for office),” he said.

Dean’s talk, sponsored by the Henry Sheldon Museum and the Hawthorne Club, was promoted under the title, “What Do the Midterms Mean for American Democracy?” While it appeared likely the GOP would retake majority of the U.S. House and control of the U.S. Senate was still in play, key Congressional election results in states like Nevada and Georgia had yet to be sorted out as Dean took the podium.

Many pollsters and pundits had predicted a Nov. 8 “red wave” would sweep many more Republicans into office, in reaction to inflation and high gasoline prices. But as one late-night comic described it, the red wave was more like a “pink trickle,” as GOP gains were much more modest than predicted.

Political analysts have pointed to backlash over the U.S. Supreme Court’s overturning of Roe v. Wade, and a repudiation of Trumpism. Former President Donald Trump’s endorsed candidates performed poorly on Nov. 8 and his three Supreme Court appointees were key in a Roe v. Wade ruling that ultimately drove pro-choice voters to the polls on Tuesday.

“If you cannot respect the courts, you don’t really have a democracy,” Dean said, “because that’s the last arbitrator of the politicians’ behavior. It’s the only limit we really have on political behavior.”

Confidence in the Supreme Court has to be restored, Dean stressed.

“If you can’t change the court, then our democracy is going to continue to be in some danger,” he said.

Pivoting to a nonpartisan judiciary will help, the former governor said, but it will also be critical for a new generation of leaders to become involved in the political process. He noted many of the country’s leaders are older folks who’ve been in office for many years. The average age of a U.S. senator is 64.3 years, and it’s 58.4 years for U.S. House members, according to the Library of Congress.

It’s a trend that’s made the U.S. a gerontocracy, according to Dean, age 73, who served 11.5 years as Vermont governor before making an unsuccessful bid for president in 2004. He stressed he’s had his fill of the political arena and now wants the next generation to step forward.

So where are the young 20-somethings who could be groomed for political office?

They’re online, Dean noted. That’s where many of them are now interacting, recreating, and talking politics.

“If you’re 25 years old, you actually live online,” Dean said. “Their reality is mostly online. It’s not like me, who’s a visitor online and doesn’t get half of the things they talk about on websites.”

But rather than repudiate the internet as a thorn in the political process, it should be embraced, according to Dean, who knows a little something about that subject. Dean was the Democratic frontrunner for president during much of 2003 and his campaign was the first to harness the power of the internet, being an early adopter of email for fundraising and exporting campaign messaging.

“If you’re living 50% online, your lifestyle and the way you view the world is fundamentally different than people our age,” he said. “And we have to accommodate that somehow in our political system.”

Dean is a fan of globalization, though he conceded it’s a phenomenon that’s currently devoid of a guidepost or user’s manual.

“What the internet has done is shrink the world in such a way… that we are one world and one people,” Dean marveled.

He stressed he doesn’t foresee or support the notion of a single, multinational government. Rather, he subscribes to the concept of “smaller units of government than we have today that cooperate with each other.”

Dean is in awe of the ability of young people to virtually interact with each other throughout the world, even penetrating internet barriers set up by such countries as China and Iran.

Dean believes the internet could become society’s ally in turning the tide of “othering,” while teaching people about the things that bind, rather than divide, society.

“One of the problems we have as human beings that’s not going to go away is a political technique that relies on our ability to classify — that is, ‘othering’ people,” Dean said. “The way you ‘other’ people is… you are creating a separate group of people who are not the same as you and therefore it’s OK to persecute them or do terrible things. Every culture does that, and some do it worse than others.”

He said conservatives this year used the transgender population as their group to “other.”

Dean said academic concept known as “critical race theory,” or CRT, has also emerged as a political strawman in recent U.S. elections. It theorizes that racism is more deeply embedded in society than mere prejudice, and that its impacts can be felt in the legal system, the economy and policing.

“(CRT) is not taught in a single public high school anywhere in the United States of America, but it got the Virginia governor elected along with a terrible campaign by his Democratic opponent,” Dean said, referring to last year’s election of Glenn Youngkin.

Dean continues to be perplexed and frustrated by the large number of U.S. citizens who don’t exercise their right to vote. According to the U.S. Census Bureau, 66.8% of eligible U.S. voters cast ballots in the 2020 General Election — a national record for this century, but a reminder than one-third of the electorate stayed at home.

It’s a trend that doesn’t bode well for democracy, according to the former governor, who noted some people seem oblivious to the power they hold in influencing their way of life.

“The people who still hold power in this country are not the oligarchs or the people in Washington, D.C.; it’s us,” he said.

Dean believes the U.S. should consider following suit with Australia and around 20 other nations where it’s illegal not to vote.

“(The penalty) is a slap on the wrist, but damn it, I think we have an obligation here,” he said. “You don’t get to be a citizen and be a freeloader. The minimum you can do is vote. And if you don’t vote, not only should you not complain, you’re undermining the country. This is a system that depends on some minimal amount of participation… At least you could have the decency to contribute to your country simply by voting.”

Dean lamented what he said is a prevailing sentiment shared by some Americans that “you owe me an awful lot of freedom, and I owe you nothing.”

It’s a sentiment that, if left unchecked, could lead to a loss of all personal freedoms because it could lead to the ascension of a dictator who could trash the Bill of Rights, he believes.

“I don’t think we talk enough about obligations in our civics and anything else we do,” Dean said. “There’s a minimal obligation. If you want to be an American, I think you have an obligation to participate, because the alternative is, you sign your right to participate away to somebody else and you end up with somebody you strongly disagree with.”

All About Bill Gates and Melinda French Gates’ 3 Children

Booking Arnold Schwarzenegger As A Speaker Requires Over $200K And A Private Jet To...

Ruben Randall - June 16, 2022 0
TV/Movies
Kraken, a U.S.-based cryptocurrency exchange, announced a cultural overhaul at the company, including a “diversity of thought” initiative that would prohibit colleagues from describing...