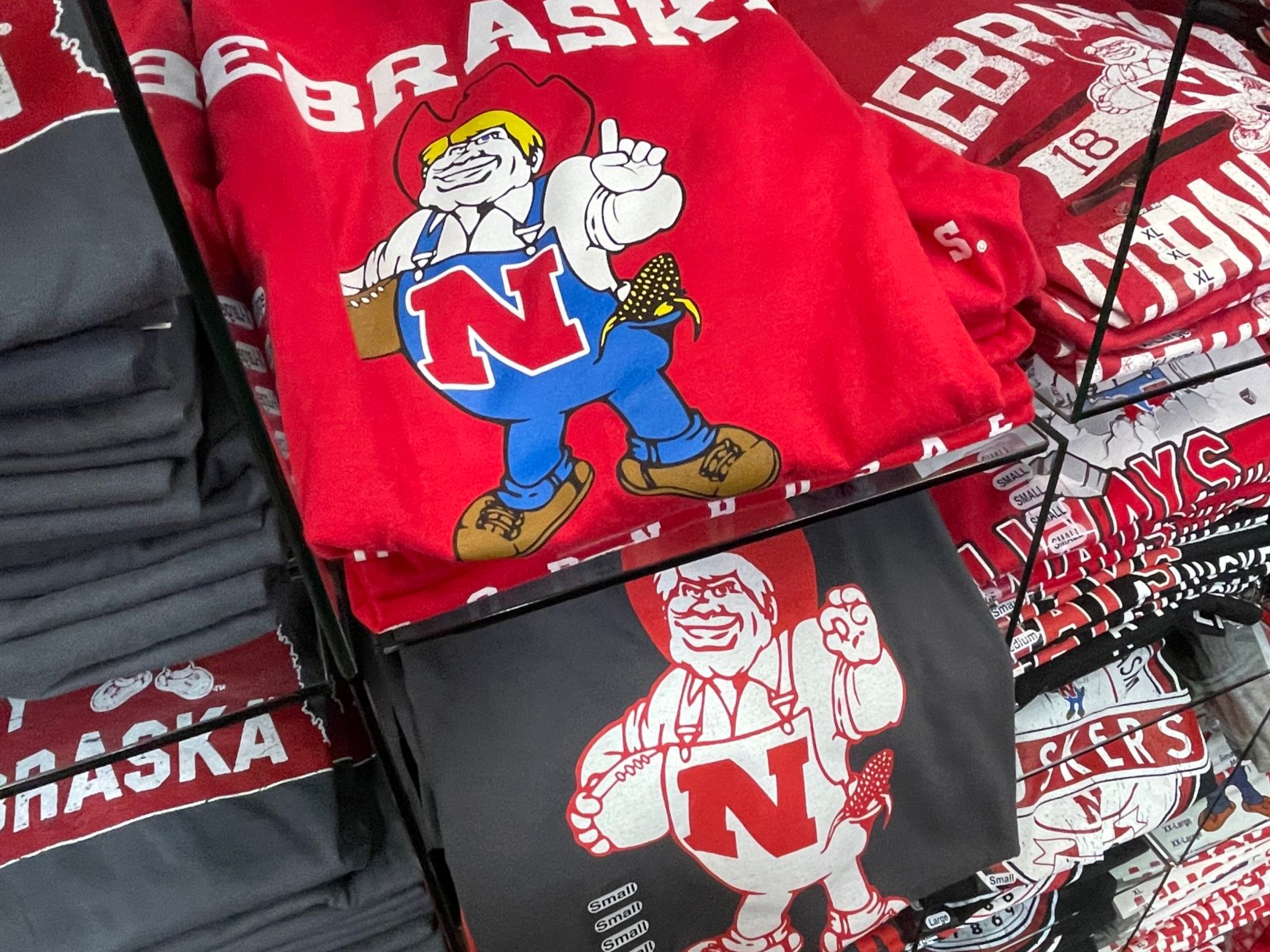 LINCOLN, Neb. (Flatwater Free Press) – For nearly 50 years, fans have loved the burly Husker mascot who wears blue overalls, sports a big red cowboy hat and keeps an ear of corn in his pocket. The depiction of the blonde-haired, blue-eyed farmer with a barrel chest and chiseled chin is, for many Nebraskans, a representation of the state itself.

For nearly all that time, Herbie Husker has held a football in one hand and thrown up an “a-OK” sign with the other. But if you’ve paid close attention, you may have noticed a change.

The reason for that slight switch: White supremacists.

Internet trolls and white supremacy groups have tried to turn the OK sign into a symbol of white power, claiming the three fingers up form a W and the circle and wrist form a P.

The new meaning was brought to the attention of Lonna Henrichs, the UNL athletic department’s licensing and branding director, in July 2020, just weeks after George Floyd was murdered by a Minneapolis police officer. Floyd’s murder prompted racial reckoning and protests across the country – including counter-protests where members of hate groups flashed the sign.

“That hand gesture could, in some circles, represent something that does not represent what Nebraska athletics is about,” Henrichs said. “We just didn’t even want to be associated with portraying anything that somebody might think, you know, that it means white power.

“We made that change as quick as we could.”

She asked an in-house designer to Photoshop Herbie’s left hand to have one finger pointed in the air. While the change hasn’t yet appeared in Nebraska’s brand book, Herbie with his index finger aloft is the only logo that will be approved for merchandise going forward, Henrichs said.

Two years ago, The Anti-Defamation League added the OK hand gesture to its hate symbol database with a caveat: “particular caution must be used when evaluating this symbol.”

They say the gesture has been used in many cultures with different meanings. In 17th Century Great Britain, it was a signal of approval. In Hinduism and Buddhism, it represents “inner perfection.” In American Sign Language, it forms the basis of many words. For high schoolers, it is a part of “the circle game” where they try to trick their friends into looking at the gesture. If they do, the person who duped them can give them a friendly punch.

“In most contexts, (it) is entirely innocuous and harmless,” the ADL writes.

But starting in 2017, the symbol gained a new meaning as members of the forum 4chan attempted to promote the symbol as a hate gesture.

The goal was to “trigger” liberals. The hoax was so successful, the ADL says, that it became popular with some white supremacists who adopted the symbol as their own. Hate groups used it at far-right rallies and during the January 6 insurrection, further pushing it into the public consciousness. 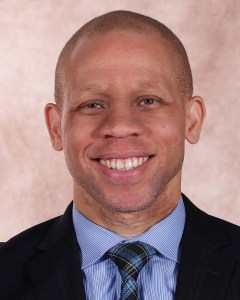 Lawrence Chatters, the athletic department’s first senior staff-level head of diversity, equity, and inclusion, was hired after the decision was made. He’s proud of the decision. He said he wants the Huskers to be “competitively inclusive.”
“When there is hatred and hurt attached to a symbol, or a word, or a gesture, we have to pay attention to it,” said Chatters, an executive associate athletic director. “We don’t have the choice to just say, ‘well, that’s not what you think it is.’

Dick West, a longtime cartoonist from Lubbock, Texas, was presumably thinking about none of this when he drew what became Herbie for the 1974 Cotton Bowl pitting Nebraska against Texas.

The cartoon, posted in the press box, caught the eye of the Sports Information Director Don Bryant. West created a slightly refined, less hokey version of Herbie for a permanent logo. 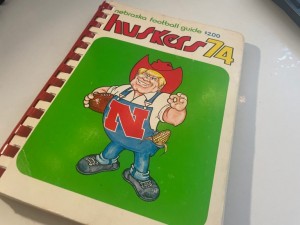 Herbie Husker’s first official appearance as a Husker mascot was on the cover of the 1974 football media guide. Photo by Jordan Pascale/Flatwater Free Press

Later that fall, the Herbie logo showed up on the media guide, his first official appearance. He replaced a tall, lanky logo and mascot known as Harry Husker. It was a time of transition for both the look and leadership of the program: A young Tom Osborne had just taken over from Bob Devaney.

West, who worked for decades at the Lubbock paper and eventually became the city’s mayor, drew a few things that wouldn’t pass muster today, including Native Americans with tomahawks, caricatured as Big 8 mascots, and Texas A&M fans as dim-witted. But Herbie spanned decades and changing times, becoming one of the cartoonist’s longest-lasting creations. 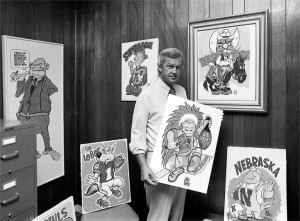 Cartoonist Dirk West poses with some of his creations, including the original Herbie Husker logo (bottom right). Photo courtesy of the Southwest Collection/Special Collections Library at Texas Tech University.

West died in 1996, just a year after Husker Athletic Director Bill Byrne attempted to get rid of the logo and mascot, saying Herbie was “not nationally marketable.”

“We’ve worked and worked with Herbie. No matter what we do, he doesn’t seem to be very appealing to our fans,” Byrne said at the time.

“You’d be surprised how agitated people are about this,” Sandi James of Big Red Etc. said at the time. “They’re more angry than they were the year Nebraska lost to both Oklahoma and Colorado.”

Herbie stayed as he was until 2004, He slimmed down under Athletic Director Steve Pederson,  went from blonde to brown hair, and traded in his overalls for a red polo and jeans.

But just six years later, the old Herbie came back in a big way. Vintage logos were in style and so popular that the Husker basketball team started using Herbie on shirts and hats. 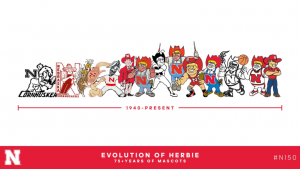 For the University of Nebraska-Lincoln’s 150th anniversary, the athletic department created a montage of Husker mascots over the years. It goes back as far as 1940 with some farmer images, corn mascots, “Harry Husker” or “Red Man” and different versions of Herbie Husker. Image courtesy of Husker Athletics.

Fans interviewed for this story understand the switch, though one laments it as a tad too politically correct.

Andrew Monson recently noticed the change to Herbie’s left hand. He  spent his early years in Nebraska and is a fan of logo design with an eye for detail. (His dad, a newspaper editor, would pay him a quarter for every mistake he found in the paper when he was a kid).

“From a marketing point of view, they absolutely nailed it in terms of brand preservation and getting out ahead of things,” Monson said. “Their worst-case scenario would be a… white supremacist who notices it and starts co-opting it… that would be an absolute disaster for the university.”

He said the decision was savvy, but a missed opportunity for a serious public dialogue.

“Even just saying, ‘hey, look, we realize this is maybe ridiculous to some people, but from our standpoint, we just can’t have any kind of association (with this), even if it started as a joke. That’s not who we are,’” he said, noting it would’ve been a good opportunity to teach about hate symbols and how they can gain power.

Aaron Wade of Alliance, Nebraska, is a long-time fan and artist who wrote about his love for classic Herbie.

“The original hand-drawn Herbie had some character,” he said. “It was hand-drawn and not computer-generated. Any more logos are just so refined… they kind of lose their character.”

He didn’t notice the hand change until it was pointed out to him.

“I understand from the (university’s) perspective, I really do,” Wade said. “It’s just sad when something so innocent gets portrayed that way… the world’s political correctness anymore is just kind of baffling sometimes.”

Scott Strunc, owner of Husker Hounds, said the change was so subtle he didn’t notice. Regardless of Herbie’s hand signal, the old school character is “the one that everybody wants,” Strunc said.

The cash register isn’t ringing as much as in years past. But that’s not Herbie’s fault.

“The reason sales are down,” Strunc said, “is because they went 3-9 and they’ve had five consecutive losing seasons.”

Ruben Randall - July 14, 2022 0
Money
MATTHEW Modine has appeared in many movies throughout his career. Most recently, audiences may recognize Matthew Modine from the Netflix show Stranger Things. 2Matthew Modine attends...

Italian steak house to open at Rivers Casino in Fishtown by...

Titans Showrunner On If Superman Will Appear In The DC TV...