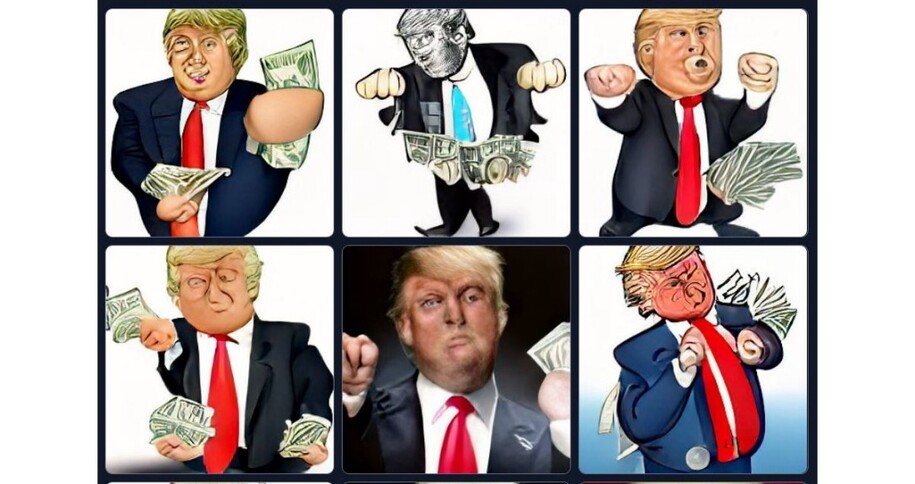 How many companies that have done work for Donald Trump’s businesses have been stiffed? According to articles by “USA Today,” “The Week,” “The Hill,” “Vanity Fair,” and “Bloomberg”, the answer is somewhere between a lot and most. Several of these sources use the word “routine” to describe the frequency with which Don the Con bilks both companies and individuals. Here are some examples cited in the articles:

1) RightForge created a global cloud network to host Trump’s “Truth Social.” The bill was $1.6 million. It has not been paid. The company was created to provide cloud hosting and websites for conservatives, and its CEO is, as the RightForge website states, “committed to American principles” (yeah, principles such as the rightness of a few old rich white men destroying what remains of our Democracy and hoarding all the money in the world). Because of this commitment, RightForge will not be suing the Chieftain of Cheat; instead, the CEO is talking about arbitration.

2) Edward Friel Jr. was hired in 1984 to build slot-machine and other cabinet bases for Harrah’s at the Trump Plaza. The final bill was $83,600. It was never paid. When Friel attempted to collect what was owed, there was suddenly no more work for him. In the end, his company was driven out of business by the Trumptastrophe.

3) Noel Cintron, a chauffeur, was owed overtime pay for the 25 years he worked for Chump. In 2018, he sued for six years of it— 3,300 hours — all that was allowed due to the statute of limitations. How’s that for a “callous display of unwarranted privilege” (I’m quoting text in the lawsuit here) by a billionaire for whom the amount he owes Cintron is chump change? The suit was eventually dropped when the matter was submitted for arbitration. Arbitration agreements typically include clauses that prevent plaintiffs from talking about their cases, so we don’t know whether the man ever got all the money he was owed.

4 through 52) Servers at the Trump National Doral were not paid for overtime. Forty-eight of them sued the Man of Steal.

54) Forest Jenkins installed toilet partitions at tRump’s Taj Mahal in Atlantic City. After years of fighting with Grabbin’ Hood’s lawyers in court, he was finally paid approximately one-third of what he was owed.

55 through 305) An additional 250 subcontractors who built the Taj Mahal were not paid in full or on time.

306) Larry Walters, drapery business owner, was stiffed to the tune of $380,000 after he delivered bedspreads, curtains, and pillows for the Malignancy Mogul’s hotel in that city.

307 plus who knows how many) Perhaps the most heinous example of Prima Donald’s avariciousness is that many bartenders, dishwashers, and housekeeping staff were unpaid or were paid less than minimum wage.

These are just the creditors we know about — those who have the money, time, and energy to initiate lawsuits or who were found by investigative reporters.

A “USA Today Network” investigation in 2018 found that the MAGAlomaniac has been involved in more than 3,500 lawsuits, and that “a large number of those involve ordinary Americans … who say Trump or his companies have refused to pay them.” Three thousand five hundred lawsuits! Not counting what have to be thousands more instances of fraud that were never reported. And also not counting the years after 2018.

Nobody seems to be reporting on the Super Swindler’s business practices for the past four years. I suppose by now he’s done so much damage to so many people that whether he pays the dishwashers or causes a small business to go bankrupt isn’t even news anymore.

Here’s what we can do about this ‘Lord of Lowlife’

Here’s my suggestion: Don’t spend money on a lawyer, sue the Apricot Hellbeast, wait for a court date, argue against his phalanx of lawyers on retainers, and appeal the Twitler’s tactics to delay proceedings. Don’t let this go on through years of frustration and expense. Instead, … wait for it!

Really. This is not as silly as it sounds. Here’s how you can do this:

Step 1: Identify a particular service provided or product sold to a Bipedal Cheeto company that is under the maximum amount you can sue for in small claims court in your state. If you’re in Delaware, for example, you can sue any of Trump’s 378 businesses in your state for up to $15,000.

Here is the maximum amount you can sue for in each state along with links to the information you will need to start a civil action.

Step 2: Find the bills you sent and make sure that there is a line item for the service or product you’ve selected. You’ll need to submit this documentation to a small claims court judge.

Step 3: Check out the information your state provides to help you with filing your claim. Consult with a lawyer if you don’t want to do your homework on the applicable state laws, but note you don’t have to have a lawyer to go into small claims court. Some states don’t even allow lawyers to argue cases in these courts.

Step 4: Follow the process to file your claim, serve papers, and argue your case in court. The process normally takes two to three months from start to finish.

Here’s why it will work

If you are in one of the states that allows lawyers to speak for you in small claims court, the company you are suing must send a responsible company employee to court to argue against your claim. This will be annoying to company management — possibly sufficiently annoying to just not send anybody to the hearing. Then, you win.

Even if lawyers are allowed, a small claims court judge is bound to look askance at a guy in a $2,000 Brunelli Cucinello suit carrying a briefcase costing twice that trying to argue that you should not be paid the teeny-weeny amount you are owed. If the judge is really annoyed, hey, you win.

Whether you win or not, you can interest your local media in a story about how Mar-a-Lardo cheated you out of what is rightfully yours.

But if you do win, you can do it again. Pick another service or product, get your paperwork together, and take the Director of Dissimulation to court again. The second time around, and the third, and the fourth, you’ll be an experienced plaintiff and the process should be a bit less intimidating than it was the first time.

If thousands of people also take the Trump Organization and its 500 companies to small claims courts all across the country, at the very least the media will have a field day with this. Imagine the headlines:

How Much Money Donald Trump’s 1st Wife Made