The time-bending, variant-heavy Loki was a heady watch from start to finish, but never quite so chaotic as the moment in episode 5 when dozens of Loki variants let the knives come out in an epic fight.

The sequence was always part of the storytelling but creator Michael Waldron tells EW that the writers left the specifics up to director Kate Herron and the stunt team. “It was painted with broad strokes,” he says. “We’d written the important characters in there — our Loki, Classic Loki, Kid Loki, Boastful Loki. And then President Loki, we knew we wanted [him] in there as a nod to that great comics run. That was the one that I had certainly always hoped, ‘Well, if Tom Hiddleston can play any of them, it’ll be that one.'”

Hiddleston did play President Loki, a fact they used to mislead people in the show’s trailers. “I liked the idea of sending the audience theorizing that this is going to be a story about Loki breaking bad even more,” says Waldron. “When in fact it’s the story of him becoming a hero. And when he meets President Loki, he’s looking at him as, ‘Wow, that’s who I was, and that’s probably who I’d still be if I hadn’t met Mobius and Sylvie.’ All of these Lokis, he’s looking at them and he’s really self-reflecting for the first time, like, ‘Man, I don’t know if I like who I’ve been my whole life.'”

From that self-reflection emerges a fight spurred by betrayals (and the show’s protagonist Loki’s desire to skip out on the mayhem altogether). “They’re chaotic beings, so that was important for me in the fight,” explains director Kate Herron of her approach to the sequence. “I worked with my stunt coordinator Monique Ganderton, and, basically, me and her were talking about, ‘Oh, where could it be fun to put some of these fights?’ We knew that in the script our Lokis had to get out of there and escape. So in terms of blocking, I thought, ‘Well, let’s put the portal at the top and then they can work their way around the room.'”

Adds Waldron: “The idea was to set up an opportunity for a bunch of different Lokis to be fighting dirty against one another, like everybody’s got a gun pointed this way. That was the chaos that we tried to set up in the script, and then it was up to Kate to actually figure out, ‘Okay, how can we make sense of this?'”

Waldron and Herron break down some of the fight’s most memorable moments below.

When Alligator Loki chomps off the hand of President Loki, all hell breaks loose.

The reptilian Loki was part of Waldron’s earliest pitches for the series, but he says it was Herron and the design team’s approach that made it work. “Alligator Loki was something that was in there that could have been so stupid,” he says. “It could have been thrown away because it didn’t feel valid. I feel like the fact that it was brought to life in such a straight, real way is why it works and actually why it’s so funny. They really take it seriously that there is an alligator there and that’s why it’s fun.”

As they workshopped different renderings of the Alligator Loki, Herron says they arrived at this very realistic version as the best option. “It became funnier the more it just felt like a real alligator,” she reflects.

Waldron conceived of this hand-chomping Captain Hook nod as the fight’s inciting incident — and bringing it to life required a stuffed alligator on a plastic stick and massive commitment from star Tom Hiddleston. “We had it fly across the room and Tom would catch it,” Herron remembers of the alligator. “But he let out this wild scream when he caught it. Everyone was trying not to laugh. I could never have predicted he would do that, but it was perfect.”

Though other aspects of the alligator did require some tweaking. Namely, the level of damage he would do to President Loki’s hand. “I remember we had a few different levels of that, and there was one that came in that was so gruesome,” says Herron. “I was like, ‘I don’t think we can do that.’ It was like The Evil Dead, it was great, but I was like, ‘It’s probably tonally not right for this show.'”

For Hiddleston to double as President Loki, he had to, as Herron puts it, “Parent Trap himself.”

Hiddleston would act opposite a body double, with Herron reading lines off-camera. “You have to film it once with Tom as our Loki, and once as President,” she explains, “and it was tight on time because it takes a long time to get those horns on properly.”

Adds Waldron: “It’s incredibly complex stuff to be doing on a television schedule.”

“Credit to Tom, how good an actor he is reacting to that,” notes Herron. “Basically it’s a mixture of doubles. Sometimes you use a little bit of split-screen, but you are using all the tricks in the book really.” 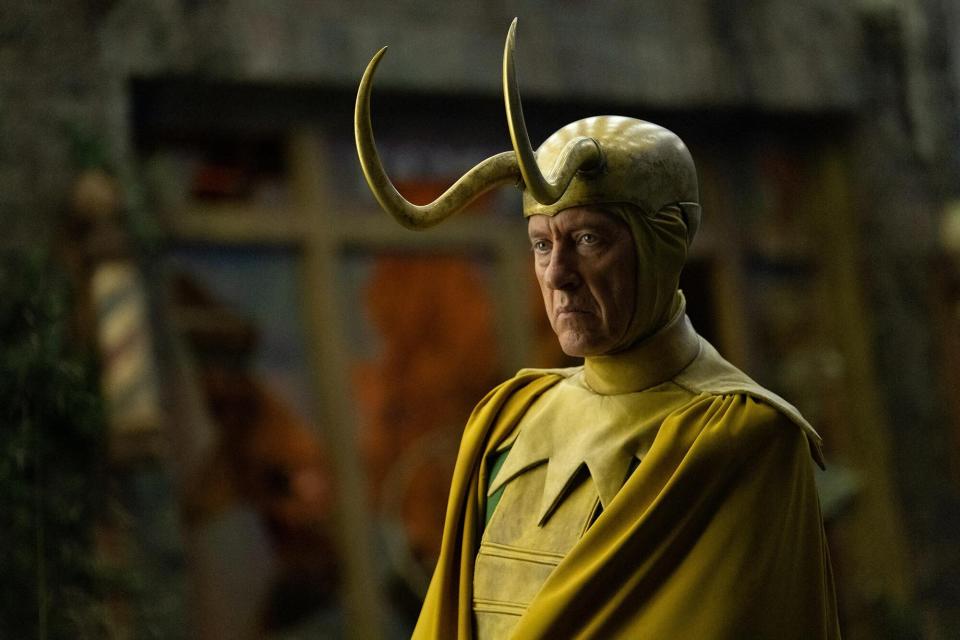 As the trickster god, Loki has magic at his disposal, but only Classic Loki (Richard E. Grant) uses it heavily in the fight.

That was essential to set up his powers for the show’s climax. “That’s the early hint of his projection power,” Waldron says, “which he’ll later do on a much grander scale to trick Alioth.”

But it was a tricky dance, figuring out just where to employ that aspect of Loki’s power. “I knew I wanted Classic to have a moment,” says Herron, “but I was working out where magic felt right, where they should be fist fighting, and balancing that with which fight beat we’re seeing through which character’s eyes.”

A Mischief of Lokis

Costume designer Christine Wada helped Waldron and Herron devise the fight’s gang of apocalyptic Lokis, including one with horns made from bicycle handles.

“She had a lot of fun building the horns,” says Herron. “Maybe some of them had to rebuild them in the void — and how did they fight with them? You give the roadmap to your stunt coordinator and designers and build it with them.”

The vast majority of the fight was shot in-camera, featuring stunts coordinated by Monique Ganderton, which was a deliberate choice to reflect Loki’s core identity.

Says Waldron: “If you watch how Loki fights throughout the movies, he’s magical — but he’s always keen to use his daggers and his fists. He’s not afraid to scrap it up. So, it’s cool to show that side of all these Lokis fighting.”

For Herron, it was a chance to let the incredible work of her stunts and design teams show off in a show that uses visual effects heavily in other sequences. “That scene was pretty much our stunt team getting to shine and showing what they do best,” she notes. “We were painting out wires and things like that. It was [that kind] of effects work than anything bigger.”

The protagonist version of Loki is intent on avoiding the fight and escaping the hideout, picking his way through the brawl with a mischievous slink.

“The fun in this episode is you see who he could have become, and who he once was,” notes Herron. “With the jumping through the fight, Loki wants to get out of there. He’s got a very clear mission. That movement, Tom did that in rehearsal, and I found it very funny. It felt emotionally true.”

That emotional truth was a guiding principle for both Waldron and Herron. “The North Star of this entire show was, ‘There’s going to be a lot of crazy stuff happening, never try to sell it out for the easy joke,'” Herron says. “This is what Loki’s actually going through. And if it seems insane to us, it probably seems insane to him, and that’s part of the fun of it. Our approach with this scene — and the show as a whole — was: always take the crazy stuff seriously.”

Ruben Randall - October 12, 2022 0
Celebrity
Raiders wide receiver Davante Adams has been charged with misdemeanor assault over a shoving incident that occurred between Adams and a photographer immediately...

Who is comedian Jo Koy?