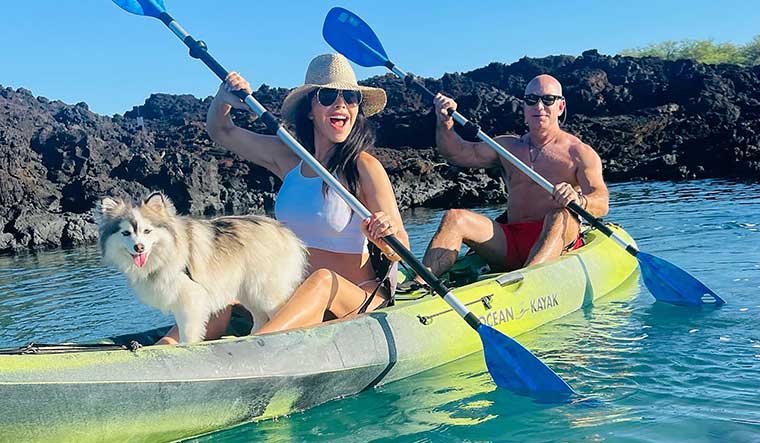 Pictures of Jeff Bezos and his glamorous girlfriend, Lauren Sánchez, spraying each other with a hose on a mega-yacht moored near St Barts are a far cry from the old image of super-rich fat cats, overweight from the high life. In the photos, which went viral, the 58-year-old founder and former chief executive of Amazon shows off his shirtless physique, revealing super-toned arms, a six-pack, and pecs that could be the envy of someone half his age. Forget the paunchy playboy, this is the era of the buff billionaire.

Very tight or weak muscles are almost always the reason for the injury, so I reduce things to a simple level until they get these moves right. —Wesley Okerson, Bezos’s trainer

If there’s one item Okerson recommends for his clients, it is a pull-up bar. “The pulling action on a bar is the very best thing you can do for your abs and core,” he says.

Harry Jameson, a personal trainer whose clients include billionaires, businessmen, and CEOs, says there has been a noticeable lifestyle change among the high-net-worth demographic he has worked with in recent years. “Over the last decade, I’ve seen a real shift in mentality from these high achievers. They used to live the high life and partied to extremes—not anymore,” Jameson says. “For many, they have spent a long time working very hard to get very rich, and now they want to strive for the ultimate status symbol of longevity and looking good in the process.”

Undoubtedly, their winner-takes-all mentality is a big contributing factor. “These people are very driven,” Jameson says. “And they tend to apply the same mindset to other goals; so, the person who has been disciplined enough to get up at 4.30am to get rich can now apply the same approach to getting fit and healthy.”

No billionaire achieves their desired physical appearance without top-notch professional help and in Bezos’s case, it is, reportedly, the trainer Wesley Okerson, who has honed the physiques of the Hollywood set for more than two decades. Okerson, who appeared in the Netflix show Strong, has a client list that includes Tom Cruise, Gerard Butler, and Isla Fisher. Bezos’s girlfriend Sánchez, 52, recently gave him the nod of approval. Beneath an Instagram post of herself and a topless Bezos looking buff, paddling a canoe, she commented, “Good Job Wes!” In another of her Instagram snaps, Bezos is featured looking equally ripped on horseback.

Okerson is known for his diverse approach to training, which includes plenty of outdoor pursuits including hill running and rowing, weights, and paddleboarding. He believes that mixing things up is the key to optimum fitness. “When you do things a different way it disrupts the system and gives you better results,” he says. “I like to change things up.”

Bezos’s newfound interest in the pursuit of supreme health is clear. He recently recruited one of the world’s most respected scientists to be the chief executive of his “anti-ageing” biotech venture Altos Labs. Hal Barron, previously the chief scientific officer for GlaxoSmithKline, has been tasked by Bezos to further develop a “cellular programming” technique that has already been shown to rejuvenate cells. He’s not the only billionaire to invest in companies promising to uncover the elixir of youth, with the Facebook founder Mark Zuckerberg and Google co-founders Larry Page and Sergey Brin also ploughing funds into cutting-edge scientific anti-ageing research.

Jameson is not surprised by this: “Longevity and physical wellness are things money can’t buy but these people want to exhaust every bio-hack that might help them achieve it.” The rest of us may not want to go to such extremes—but we can adopt some basic rules from the top.

Okerson, who is too discreet to name his clients, will say he insists they all go back to basics and learn simple exercises that involve elements of pushing, pulling, squatting, and pressing well. “So many people have bad habits and if you exercise with poor technique, you will be prone to overuse injuries,” he says. “Very tight or weak muscles are almost always the reason for the injury, so I reduce things to a simple level until they get these moves right.” Basic squats, lunges and push-ups are performed using only bodyweight at first.

Invest in resistance bands and dumbbells

Okerson encourages his clients to lift increasingly heavyweights—but slowly and progressively, and only after they have mastered good technique. He says starting with resistance bands helps someone feel the muscles they need to be using for each move. He also suggests investing in some dumbbells. “When they have got the technique, I add some weights to the moves.”

But if there’s one item he recommends for his clients, it is a pull-up bar. “The pulling action on a bar is the very best thing you can do for your abs and core,” he says. “You won’t get strength and definition from doing crunches; the pull-bar is the thing.”

There is plenty of research to back up Okerson’s philosophy on resistance training. A 2019 study presented to the European Society of Cardiology found that people with greater muscle power—achieved through five to six fast repetitions with weights—tended to live longer than people who didn’t lift weights. The study author, Claudio Gil Araujo, the director of research and education at the exercise medicine clinic Clinimex in Brazil, recommended starting with a weight “not so easy to lift and not so heavy that you can barely lift it” and performing one to three sets of six to eight repetitions, moving the weight as fast as possible.

Okerson is a big fan of running and regularly posts images of himself running on his Instagram account (@wesokerson). He ran the 2019 LA Marathon and crossed the finish line of the New York Marathon with the actress Katie Holmes, Cruise’s ex-wife, in 2007. He incorporates running into gym sessions for his clients—a favourite gym session of his is press-ups followed by a 1km treadmill run.

“If they aren’t into running or it doesn’t suit them, I get them to set a treadmill on an incline and walk at 2.8mph,” he says. His favourite approach, however, is outdoor hill running, which he says is fantastic for fat-blasting and fitness.

“If you can find a hill or incline to run up it’s absolutely the best way to improve your aerobic engine,” he says. “Hill repeats and hilly running have been staples in my workouts for a long time.” He adds that it is important to combine running with other forms of exercise, too—canoeing and rowing are his favourite activities. His best advice to clients who are not planning to run a marathon is “to change things up”.

Okerson is known for his attention to detail when it comes to planning training to fit in with hectic A-lister schedules. “Everyone is different and it all depends on their goals and how much time they have,” he says. “Rest and recovery are very important so that needs to be factored in, too.” Since Bezos stepped down as the Amazon chief executive last July, he has had more time to dedicate to exercise, Jameson says, observing that his now super-trim body is that of someone who is doing low-impact cardio such as rowing in the morning and strength work in the afternoon. “This is a combo that will ramp up the body’s metabolism and help to offset some of the hormonal changes that lead to fat deposition in the form of moobs and a paunch.”

Eat less (but don’t starve yourself)

“It all comes down to calories in versus calories out,” Okerson says. “There are elements of different dietary approaches that I like, but the bottom line is it must work for my clients and they need to eat smaller portions while getting all the nutrients they need.” Bezos is lean but not scrawny, which means he probably aims to keep his body fat percentage at the sweet point—12-14 per cent—which is healthy and sustainable for a man, Jameson says. “If you dip under that and below 10 per cent, it can make you look haggard, so fantastic- looking over-40s tend to stick within that range,” Jameson says many of the execs he has trained adopt time-restricted eating, a form of fasting that involves consuming all calories with an eight or ten-hour daily window. It has been shown to produce a drop in body fat and prompt a corresponding rise in HGH levels. “Since low levels of HGH are associated with belly fat, this is a good thing,” Jameson says. “But intermittent fasting also triggers autophagy, the body’s way of cleaning out damaged cells to generate new ones.”

See also  Who was Desi Arnaz and what was his net worth when he died?

Healthy fats such as avocado, nuts and coconut oil feature in the diets of Okerson’s clients, as well as protein. He also recommends they eat healthy carbs such as porridge and bananas to fuel a workout. “The message about protein has gone into overdrive and you don’t need huge amounts more unless you are a bodybuilder looking to get bigger,” Okerson says. “Aim for a good balance of protein, fat and healthy carbs, with slightly more emphasis on protein and healthy fats as you get older.”

How much extra protein you might need as you reach midlife was the subject of a review conducted at McMaster University in Canada and published in the British Journal of Sports Medicine, which showed that men and women who ate more protein while weight training developed larger, stronger muscles than those who did not. The researchers found that the middle-aged and older weight trainers were unlikely to be consuming enough protein: about 1.6g per kilogram of body weight per day. As a result, they showed smaller gains in strength and muscle size than people in their twenties and thirties.