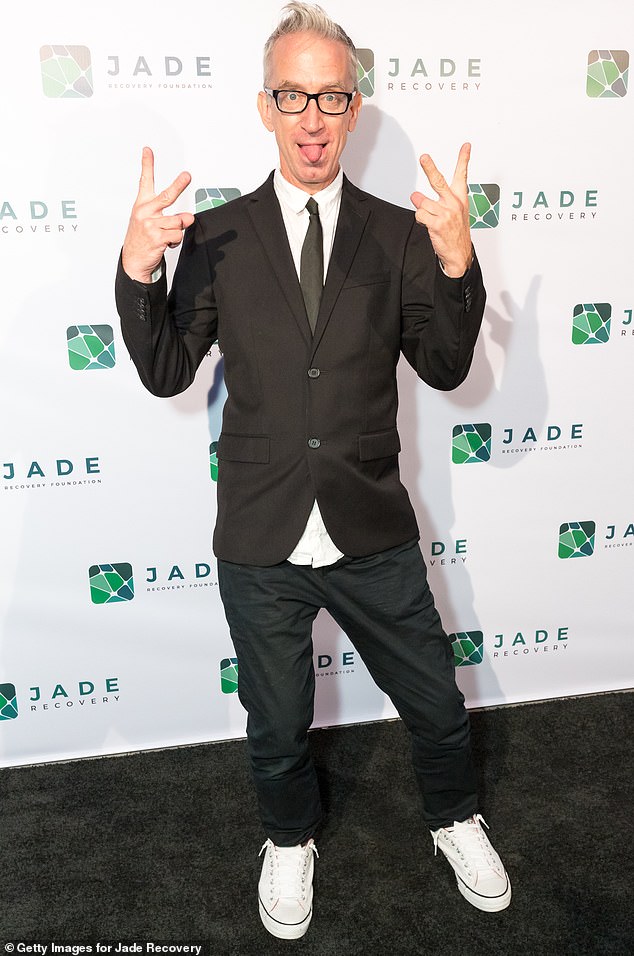 Troubled comedian Andy Dick has gone from making millions to being arrested for felony sexual battery at a $20-a night RV park where he lived with a group of livestreamers – the latest in a long string of bizarre behavior and run-ins with the law.

Dick, 56, is considered to be one of the most recognizable comics of his time, but also a controversial one who has struggled with drug addiction and made headlines for his numerous arrests, sexual misconduct allegations, and bizarre behavior.

This week, the comedian made headlines again when he was arrested on Wednesday at an RV campground at O’Neill Regional Park in Orange County, Southern California.

Dick was taken into custody on  suspicion of sexually assaulting a man in the RV where he was staying with livestreamers since being evicted from his apartment last year and is now held on $25,000 bail until his scheduled appearance on Friday.

The comedian’s net worth also appears to have significantly dropped in recent years, plunging from an estimated $3 million in 2016 to $2.5 million in 2018 according to The Richest and to a mere $300,000 according to Celebrity Net Worth.

Andy Dick, 56, has gone from making millions to being arrested for felony sexual battery at a $20-a night RV park in Southern California where he lived with a group of livestreamers 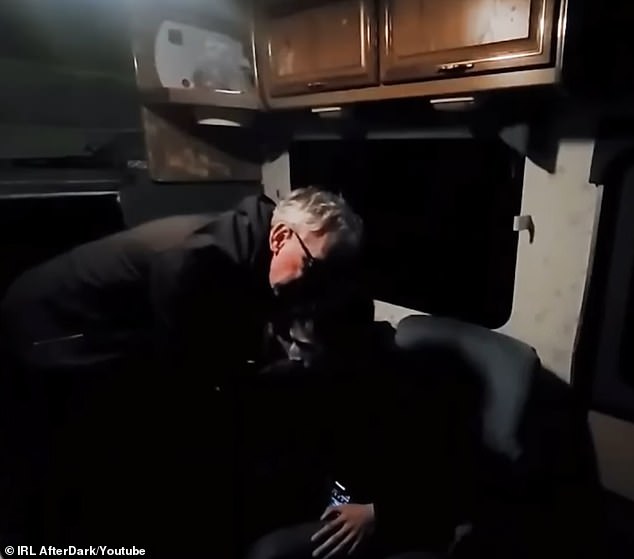 The comedian is pictured in an RV at a campground at O’Neill Regional Park in Orange County before he was arrested for allegedly sexually assaulting a man on Wednesday, May 11

A livestream of his recent arrest was shown on YouTube and footage posted to the channel ‘Captain Content RV’ afterwards revealed the events in the lead up.

A young man, who goes by the name ‘JJ’, can be seen telling another person in the RV that he believed Dick had molested him in his sleep as he could feel some sort of lotion or lubricant in his butt.

‘I was just in bed right now, and I smelled certain parts of my body … [I was] in the other RV with Andy, and … the last thing I remember, we were on the phone with his fiancée … I smelled parts of myself and they smell like artificial smells,’ he says while appearing slightly disorientated.

‘JJ’ is heard in the original livestream then trying to confront Dick about the alleged incident.

Dick, who is heard saying that he’s on the phone with his ‘baby’s mama’ denies the allegation, and then is heard asking, ‘Did you take my blow?’

‘No, I didn’t even take it whenever it was offered,’ the man replies.

‘JJ’ man then asks Dick, ‘Why did you assault me in my sleep?’

Dick denies the accusations and tries to block the camera with his foot.

‘I never assaulted you in your sleep,’ he responds. ‘Can you leave me alone?’

Sgt. Scott Steinle confirmed to Page Six that the Special Victims Unit is involved in this situation and ‘part of their investigation is to make sure that the victim is taken care of physically and that would also include a potential physical exam’.

The incident comes just a month after police were called to an apartment in Las Vegas where Dick had been staying with a Twitch streamer, who apparently pulled a gun on a third man during a chaotic scene caught on camera.

Footage of the livestream shows Dick with a relatively unknown internet personality who goes by the name Wappy Flanker online, at whose apartment Dick had apparently been sleeping at.

The shocking video, which was attempting to raise money to help the beleaguered comedian, then shows a third man join the pair at Flanker’s place – where an argument quickly breaks out.

Flanker then pulls out a gun and warns the man to leave as Dick can be heard in the background saying ‘Don’t shoot the gun.’

TMZ reported that authorities were alerted to the situation after someone who was watching the live stream called for a welfare check.

Commenters online began to speculate that Dick was being held hostage at the meager apartment – though Dick reportedly told police that he wanted to remain at the home. 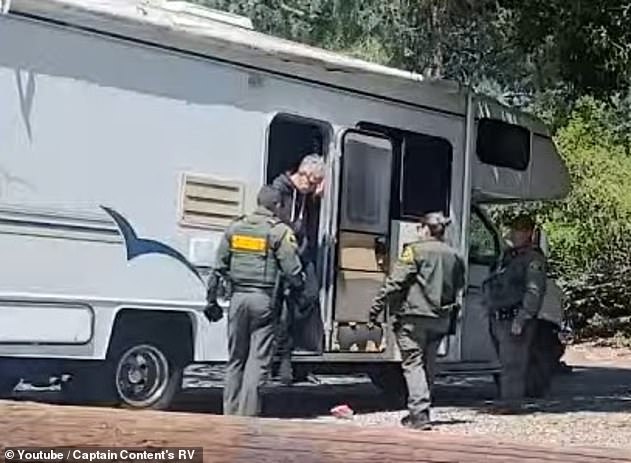 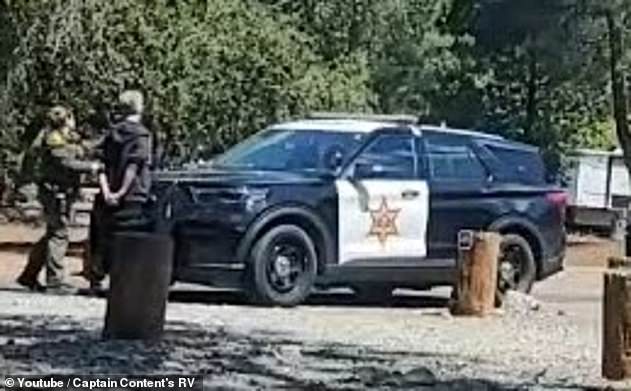 Dick, dressed in a gray hoodie and black joggers, was hauled away in handcuffs before being placed inside a patrol car 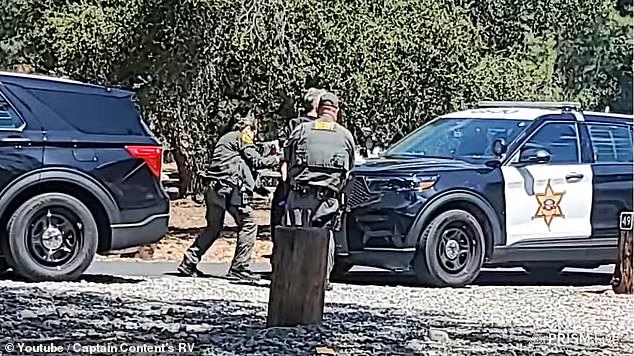 Dick’s friend Elisa Jordana, 33, revealed on her YouTube show, Kermit and Friends last year that Dick had been staying at hostels and at one point stole ‘cutlery, a wine glass, and plates’ from a steakhouse.

‘He asked for a doggie bag so he could put all that in,’ she recalled, in addition to alleging he told the waitress he wanted to sleep with her.

Dick, who got his first major break on the Ben Stiller Show in 1992 and is known for his roles in NewsRadio, Inspector Gadget and Road Trip, was dropped from two movies in 2017 – Raising Buchanan and Vampire Dad.

The comedian was accused of groping members of the production but no one came forward to formally complain.

‘I didn’t grope anybody. I might have kissed somebody on the cheek to say goodbye and then licked them,’ Dick told The Hollywood Reporter following his removal from the film.

‘That’s my thing—I licked Carrie Fisher at a roast. It’s me being funny. I’m not trying to sexually harass people.’

Dick was interviewed later that same year by TMZ who sought him out for comment regarding the string of sexual harassment scandals that rocked Hollywood in 2017.

He appeared to make light of the allegations against Harvey Weinstein and actor Kevin Spacey, saying they were probably ‘just trying to get a date’.

Dick then threatened to grope the cameraman but at another point in the interview he tearfully admitted to contemplating suicide every day. 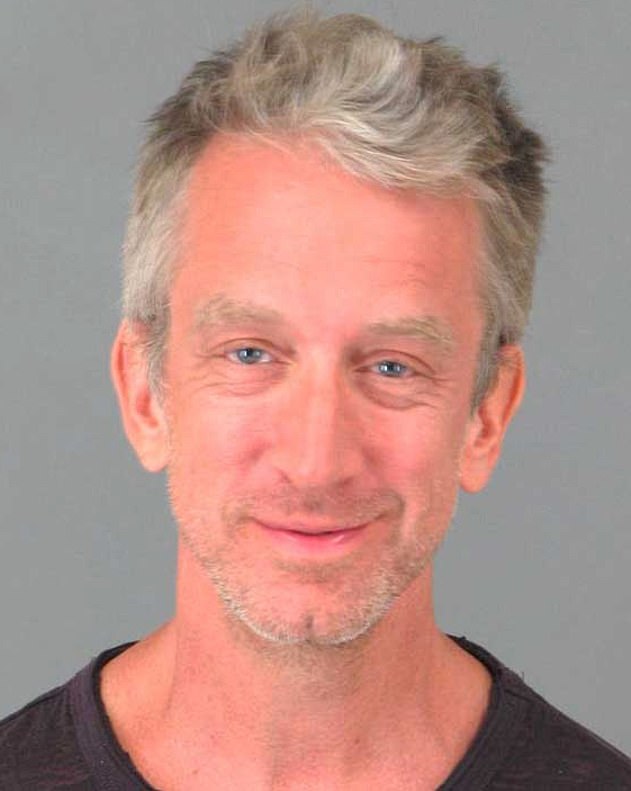 A  mugshot of comedian Andy Dick taken in 2011  after he was arrested at a restaurant in Temecula, California for acting disorderly

In November 2021, Dick was arrested for felony domestic battery after he allegedly hit his boyfriend in the head with a liquor bottle.

According to police, Dick and his boyfriend had been at his home when they got into a heated argument that quickly turned physical.

When police were called, they determined there was enough evidence to arrest the comedian, as his boyfriend was allegedly bleeding from a sizable wound on his head.

In October 2021, Dick was arrested for allegedly hitting his boyfriend in the face with a frying pan.

In June 2021, the actor was arrested for assault with a deadly weapon for allegedly attacking a male partner with a metal chair.

Dick also made his $50,000 bail after that altercation. 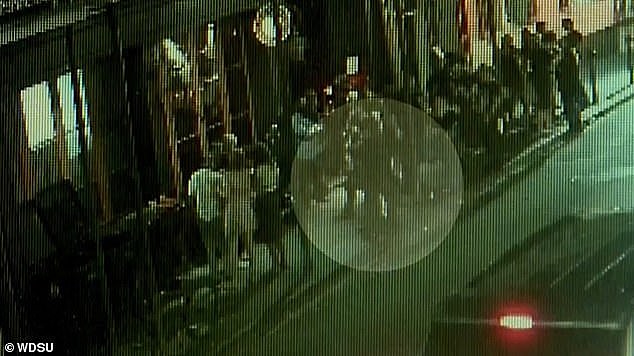 In 2019, the actor was sentenced to 14 days in jail after being convicted of sexual battery for allegedly squeezing a woman’s rear end but was released after a single night due to overcrowding.

The same year, he was seen on video being slammed to the ground after he got into a fight with an Uber Eats driver while seemingly intoxicated.

In 2019, Dick was reportedly knocked unconscious during an attack in New Orleans, and was taken to hospital to be observed for ‘a possible brain bleed.’

David Hale, 46, claimed Dick grabbed his genitals prior to the incident. 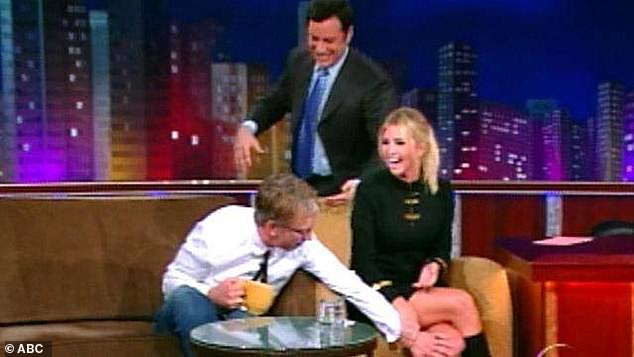 The publication quotes a law enforcement source who states: ‘Hale claims he had watched Dick perform at One Eyed Jacks and was saying goodbye to him when Dick grabbed Hale’s genitals.

‘Hale told investigators he became incensed, and Dick reacted by winking at him, ultimately leading Hale to punch Dick’.

The comedian previously pleaded not guilty to one count of misdemeanor sexual battery in April 2018 after he allegedly groped an Uber driver’s crotch.

Dick’s estranged wife Lena Sved received a domestic violence restraining order against him in 2018, which required him to move out of their home and remain 100 yards away from her and their adult children: Lucas, 33, Jacob, 27, and Meg, 24.

In 2012, he was arrested for allegedly grabbing a 17-year-old girl’s top and pulling it down to expose her breasts.

He was later found with marijuana and pleaded guilty to misdemeanor drug and battery charges, for which he was sentenced to three years of probation. 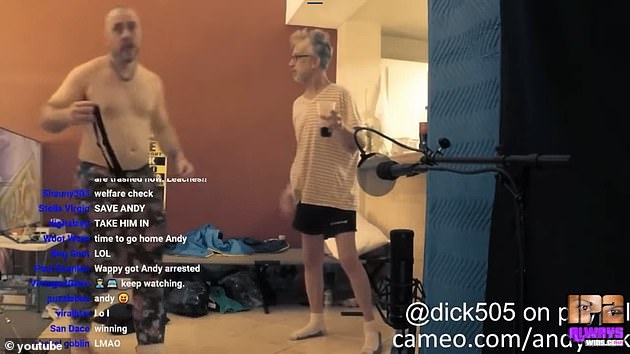 Video from the live stream shows Dick, who was with the personality known as Wappy Flanker, as a third man joined them at Wappy’s place where an argument broke out 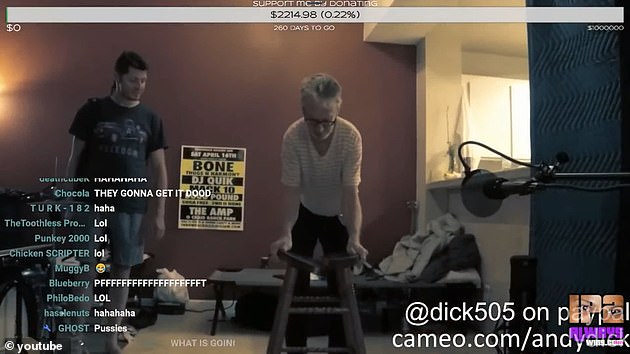 The live stream was seeking donations for Dick, pictured towards the top, who appears to be sleeping on a cot in the living room

In 2010, he was arrested for allegedly grabbing a man’s genitals while intoxicated at a West Virginia bar.

In 2007, Dick groped Ivanka Trump during an interview on Jimmy Kimmel Live and was pulled off stage by security staff.

She was greeted by Dick, who asked Ivanka for a ‘big, wet kiss’ right off the bat Kimmel later told Extra.

The situation spiraled with Dick rubbing his hands on Ivanka’s thighs and knee while she politely tried to stop the unwanted advances.

Kimmel proceeded to stop Dick from touching Ivanka before continuing the interview.

Dick continued to touch Ivanka, first trying to grab at Ivanka’s ponytail and then touching her arm, before security dragged him off the stage.