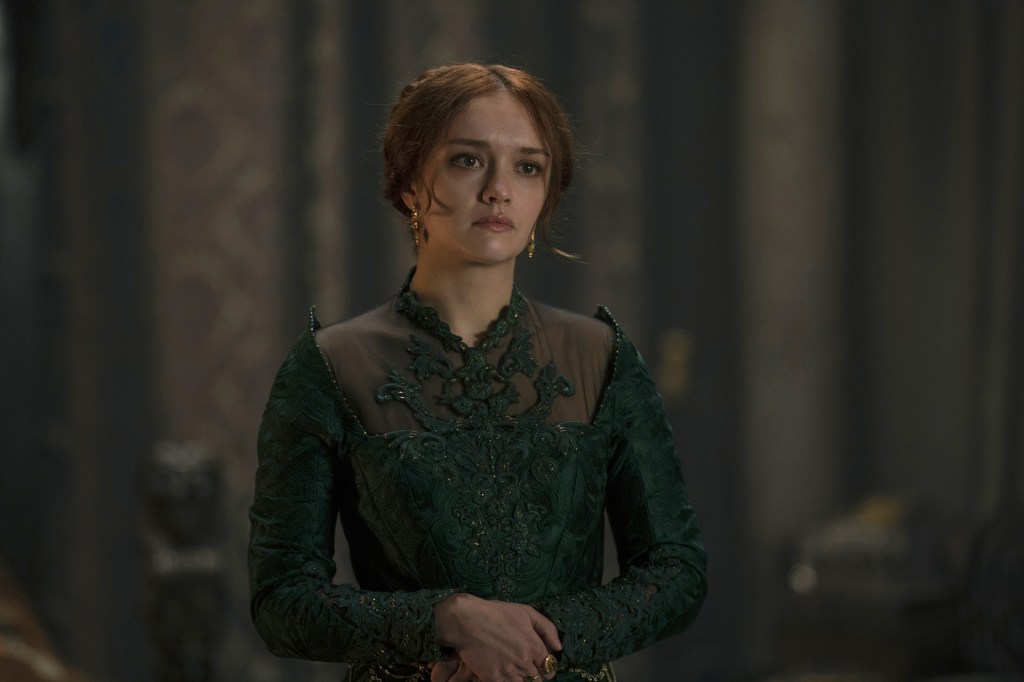 Thank goodness Olivia Cooke didn’t take the original note that her character should come across as a medieval woman for Trump. When the British actor took over the role as Alicent Hightower in HBO’s House of the Dragon, she focused on how she’s coming from “a place of undying love and protection for her children.” Here, the actress reflects on her first season of the drama and how folks shouldn’t assume she’s a straight-up bad woman.

DEADLINE It was a bummer not to see you in the finale. But I guess Alicent did her damage in episode 9?

OLIVIA COOKE She did, unfortunately. I think that was enough of Alicent for the season.

So many fans were puzzled that Princess Rhaenys didn’t burn you to death at the end of episode 9. Why do you think you and your son were spared?

COOKE I think she ultimately recognized a mother trying to protect her children, which is exactly what Rhaenys would do. I think she just couldn’t have that on her conscious. And ultimately, whether or not the Greens die should be decision left for Rhaenyra or Daemon.

Alicent has been called a villain. Is that really fair?

COOKE I never played her as a villain. I know she makes morally questionable decisions and her reactions can be quite uncouth, to say the least. But I have to believe in what she does in order to play her with absolute honesty and truth. I really have to empathize with Alicent and know that she’s coming from a place of undying love and protection for her children. I think sometimes the internet discourse can be a bit too black and white. I read a tweet that I think summed it up really well: It’s not who’s good and evil, it’s who’s your favorite war criminal.

When you began, what kind of pitch did you get on Alicent? Did you get an inkling that folks may end up not liking you?

COOKE They said that she was a woman for Trump. I just didn’t want to give that man more mental real estate than he already occupies in everyone’s mind. I just ignored that and played her as a woman of the patriarchy who completely believes in order and tradition.

See also  Trump news today: Mo Brooks says then-president asked him to rescind 2020 election and put him back in office

She loved Viserys, didn’t she?

Is she truly aware that her sons are ghastly human beings?

COOKE Yeah, absolutely. We spoke a lot about this, how she is sort of stuck between a rock and hard place when it comes to Aemond and Aegon. She probably believes that Aemond is more suited to be king, but he’s the spare heir. She loves Aegon, but she’s so disgusted in who he is as a person. Up until Viserys says on his deathbed that he wants Aegon to be on the throne, and she perceives it to be her Aegon …. so many Aegons! … I think she had come to terms with Rhaenyra being on the throne. When she gives that speech to Rhaenyra saying, ‘you will make a fine queen,’ I think she really believes that. There was deep relief in accepting that and letting go of the decade’s worth of bitterness.

Let me go back to the beginning. What did you think when you were told that you would replace Emily Carey midseason? Did you wonder if that would be a bit abrupt for viewers?

COOKE It wasn’t delivered like that because we all started simultaneously, and Emma D’Arcy and I were cast first. So it never felt like we were replacements. It just felt like the first five were going to be flashbacks. But it’s rarely done, where you switch up the main characters halfway through the season after the audience has grown to love Emily Carey and Milly Alcock. I think while watching it, I felt more pressure than when I actually filmed it. It never felt like we were replacing the others. It just felt like the first five episodes were a sort of a time capsule.

Do you think Alicent and Rhaenyra have a silent understanding that if it wasn’t for all the men who surround them, they would still be friends?

COOKE I think so. I think in the big dinner scene in episode eight where they’re surrounded by Daemon and Viserys, all of their sons and just the mess and testosterone that fills the room, I think it’s suddenly very clear and simple to them that they actually are together and not divided. It would’ve been so much easier.

What’s has this experience been like? Does it compare to anything else that you’ve done in terms of the scrutiny?

COOKE No, no. I don’t think anything could have prepared anyone for this. It’s mad. I think I’ve had a bit of willful ignorance about how it would change my life. I think maybe in like three months time, it’ll probably die down. But when I’m on the tube, I definitely feel people’s eyes and … there’s the odd comments. then you do kind of start to feel monitored and I’m like, ‘Oh God, what am I wearing today?’ They take pictures and suddenly, you’re in a cloud of paranoia. I’ll just be happy for it to be over. It has been strange. I think maybe next time it comes out I’ll be a bit more prepared for it. But it’s a prolonged period of anxiety, this 10 weeks of an episode coming out and another episode coming out.

Have you been given any hints about where the action will begin in season 2?

COOKE We’ve had hints that I couldn’t possibly talk about. We will start back in the spring, so I’m sure we’ll see scripts very soon.

Any dragon riding for you in the future?

COOKE Unfortunately, no. It would be cool to see me on a dragon, but also I think the reality of filming it doesn’t look too fun. So, I’m quite happy with not being on the dragon.

House of the Dragon: What Happened In The Season Finale

Lauren Sanchez puts on VERY leggy display as she steps out with Jeff Bezos...

Ruben Randall - July 26, 2022 0
TV/Movies
The popular Central Texas floating and music festival, Float Fest, returned with a bang in Gonzales after a three-year hiatus. Over the weekend from...

Amanda Seales Considered Leaving Acting After Getting Kicked Out Of An...