House Of The Dragon has finally hit our TV screens after what can only be described as an agonising wait since we first heard whispers of the show back in 2020.

Fans of the Game of Thrones franchise, which is set 200 years after HOTD, will know that British actors Emma D’Arcy And Olivia Cooke take the lead in the TV series, which is a prequel based on creator George R.R. Martin’s Fire & Blood book and tells the story of the House of Targaryen.

Ahead of the release of their new HBO series the actors sat down with ELLE UK to play a game of Knowing Me Knowing You about their co-stars which include The Crown’s Matt Smith, Peaky Blinders’ Paddy Considine and Reckoning’s Milly Alcock.

On meeting Smith for the first time, D’Arcy explained that they had a ‘person off the telly’ fan moment. ‘I have an amazing capacity for awkwardness,’ they told us. ‘I’ve watched him a lot and I think she’s truly f*cking good.’

Cooke recalled meeting the actor for the first time at the Met Gala. ‘He looked me up and down and said “Olivia, that outfit screams party!” And I’ve loved him ever since.’

Elsewhere in the video the pair correctly guessed that Harry Potter star Rhys Ifans is a patron of the Welsh language. ‘There’s something really beautiful about the differentiation between a South Wales accent and North Wales accent in the language,’ added Cooke.

On learning how to speak High Valyrian for House Of The Dragon, D’Arcy noted: ‘I really enjoyed learning High Valyrian. People will know it’s a fully operational language. It’s very gratifying to unpick…

‘I guess one could parrot back the sounds because we received recordings, but I’m a person with integrity so I wanted to find the practice that would allow me to embed meaning into the words I was learning. So I did a lot of work using gesture while practicing and looking at the English translation while saying High Valyrian as a means of keeping it active.’

The pair also revealed their in-depth knowledge of Considine’s music video past, which includes appearances in both an Arctic Monkeys and Coldplay video. But for Cooke there’s one musician in particular she’d love to star in a music video opposite.

‘Rod Stewart,’ she revealed, without hesitation. ‘Just as the girl he’s singing to and there’s loads of wind in my hair. And I’m on a boat… in the Mediterranean.’

While D’Arcy and Cooke’s go-to emojis that represent their personalities are the devil mask and melting smiley face, respectively, they agreed that if they could choose to have just one mythical creature as a pet, it’d have to be a dire wolf. 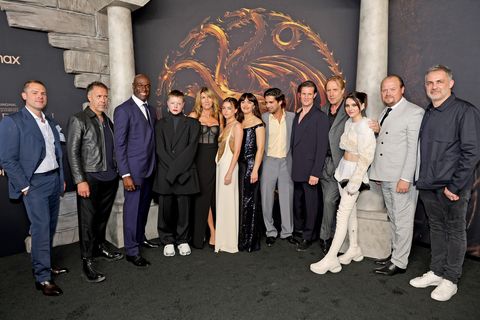 ‘Hard to store anything bigger honestly, especially if you live in London – with house prices as they are,’ joked D’Arcy. ‘I don’t even have a garage.’

From discussing what skills they’d explore in their YouTube tutorials to explaining the challenges of working with CGI, watch the video at the top of this article to find out more.

See also  "Rhaenyra represents what she could never have": Olivia Cooke on Alicent's jealousy

House of the Dragon is available from August 22 exclusively on Sky Atlantic and streaming service NOW.

Neighbours’ biggest ever stars – how much cast went on to earn including singer...

Emma D’Arcy and Olivia Cooke Discuss if Adult Rhaenyra and Alicent Have a Romantic...