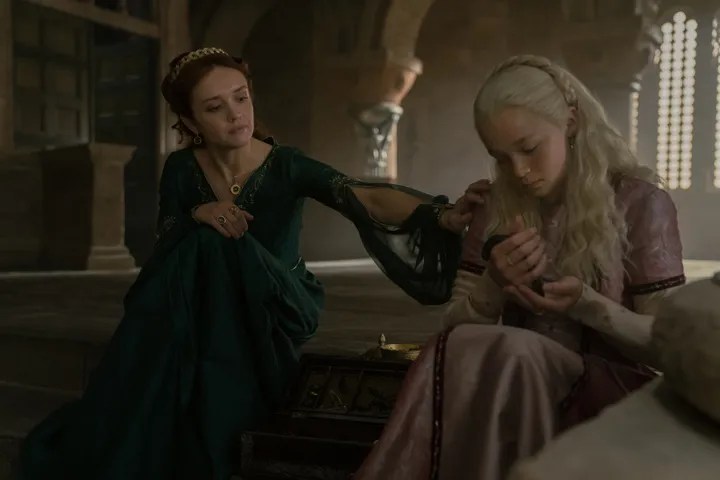 “I could see what they were saying with this complete indoctrination and denial of her own autonomy and rights,” Cooke said of playing Alicent in the “Game of Thrones” prequel series.

“House of the Dragon”

Olivia Cooke couldn’t stomach even pretending to be a Trump supporter.

The “House of the Dragon” actress, who took over the role of Alicent Hightower from Emily Carey due to a series time jump, revealed that co-showrunners Miguel Sapochnik and Ryan Condal advised her to find inspiration from the disgraced former president. The series creators told Cooke to view the character Queen Alicent like a “woman for Trump.”

“I just didn’t want to give them any more mental real estate than they already had,” Cooke told Entertainment Weekly about calling back to the Trump family. “So I tried to find a different route into her, but I could see what they were saying with this complete indoctrination and denial of her own autonomy and rights. I just couldn’t be asked to go down that road.”

Cooke noted that Alicent has been “bittered and twisted over time” due to her prescribed gender role.

“Alicent has been completely bred to breed, and to breed powerful men. That’s her only function in this life,” Cooke said. “She can tell herself that she’s going to sway and nurture and persuade in a very womanly, feminine way, but it’s all fucking bullshit. Unless you’re fighting the men, you’ll never be heard. It’s learning to live within this straightjacket of oppression. How do I move inch by inch every single day to loosen the straps?”

She added that Alicent has to “walk this tightrope for her whole entire life,” and that Cooke found a “humanitarian hook” for the character.

“You’re seeing her struggle with her womanhood and the power that she does have to play that is completely separate from her husband or her father or even her children. And also just moralistically where she stands when she isn’t listening to her father anymore,” Cooke said. “I think what we see in her evolution is this complete existential crisis.”

Cooke concluded, “She’s got all these men around her that just want a piece of her, or want to use her in a specific way, but no one actually has her best interest. It’s just a really lonely existence.”