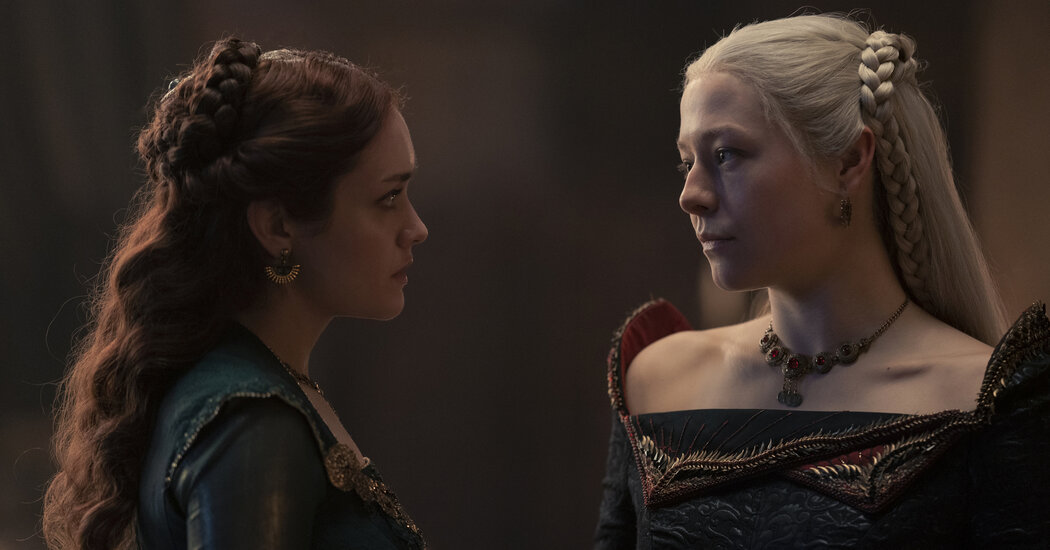 This interview includes spoilers for the first eight episodes of “House of the Dragon.”

By the time Emma D’Arcy and Olivia Cooke debuted, in the sixth episode, in HBO’s fantasy smash “House of the Dragon,” you had seen them before. Well, their characters, anyway.

But because of the story’s unusual structure — the show covers decades in its first season, during which Rhaenyra and Alicent grow up and have children of their own — their roles were played by the younger performers Milly Alcock and Emily Carey in the first five episodes. As the time for the cast switch-over drew closer, D’Arcy grew more and more nervous.

“I found that bit the most pressurized point of the whole job so far,” D’Arcy said during a conference call from London earlier this week. “The audience only gets to meet you in a state of grief, having just lost the person they spent five hours with. The closer we got to inflicting that on people, the more stressed I felt.”

Cooke looks at it a bit differently. “Those were the halcyon days,” she said. “We weren’t confronted with millions and millions of people watching our performances week after week. Usually, you do a film, it comes out, it goes away.”

“No one watches it!” D’Arcy chimed in, prompting raucous laughter from both actors — a common occurrence in the conversation.

“No one watches it” is certainly not a problem faced by “Dragon,” a “Game of Thrones” prequel that has thus far has lived up to the blockbuster success of its predecessor. The complicated relationship between D’Arcy’s and Cooke’s characters is the primary engine of the story, and that centrality, along with a series of charming promotional videos and appearances, has made the actors among the show’s most popular performers. Even D’Arcy’s favorite drink order — “a Negroni Sbagliato with prosecco in it” — now has its own online fan base.

Seeing how well the two actors get along, it is easy to forget that they play bitter enemies. At the end of the show’s most recent episode, there was a hint that the cold war between their characters might finally thaw. But given the dying king’s garbled prophecy and the patriarchal system that seems determined to divide Rhaenyra and Alicent, their renewed peace appears to be in peril.

These are edited excerpts from the conversation.

Rhaenyra and Alicent have been estranged for the duration of your time on the show, but there’s a moment near the end of this week’s episode when their former closeness seems to have been rekindled.

OLIVIA COOKE Even in fury, there is still a desire to be as close to one another as possible. They’ve not seen each other for such a long time, since Alicent attacked Rhaenyra [during Episode 7]. Alicent has been alone in that castle with all these men, and she’s probably been festering and thinking about that for a very, very long time.

EMMA D’ARCY We had an amazing conversation, in advance of shooting the episode, about it being sort of set in a hospice [for the dying King Viserys]. Proximity to death can alter your chain of priorities; it offers a canvas for forgiveness where there wasn’t one previously. Going in, we really wanted to make sure that that moment at the end felt honest, that we could buy that these two people get there. It’s not an “all is forgiven” moment, but it’s a gesture to forgiveness.

It feels like a small moment of freedom for two characters who’ve been forced into their roles by the men in their lives.

COOKE These characters are being watched all the time. They’re always operating under the constraints of this straitjacket and learning how to maneuver within it. In this episode, it’s about taking chances and jumping on an opportunity Alicent may never get again — desperation for a friend and ally.

D’ARCY It’s no coincidence that the male figures with power within this court have created conditions where Alicent and Rhaenyra’s relationship becomes untenable. It’s no coincidence that patriarchal structures look to divide and conquer strong female relationships. They would be the ultimate allies because there’s no one else who can truly understand what it is to be the oppressed party. Patriarchal structural oppression operates in such a multiplicitous and slimy way. That understanding can’t be conjured in someone who doesn’t live through it.

Milly and Emily have discussed the possible presence of a sublimated romantic or sexual spark between Rhaenyra and Alicent. Does that motivate the characters, even as adults?

COOKE I don’t know if Alicent knows what it feels like to feel those things now. There’s layers and layers of repression; sexuality and lust are probably a prehistoric, sedimentary layer by now. From Alicent’s point of view, I don’t think she’s that self-aware, in terms of what she’s feeling, to know what’s propelling her to reach out to Rhaenyra again.

Olivia, I’ve seen a lot of debate over the end of this episode, when Viserys mistakes Alicent for Rhaenyra and tells her about his ancestor Aegon the Conqueror’s prophecy of a messianic “Prince That Was Promised.” She mistakenly believes Viserys is referring to their son, Aegon. Does she fully believe it, or is she hearing what she wants to hear?

COOKE We spoke a lot about this. There was a massive amount of relief when Alicent told Rhaenyra, “You will make a great queen.” She’s so over the fighting and having this ball of bitterness and anxiety in her stomach: Just let it go, Rhaenyra is the heir, this is fine.

When Viserys says that, I genuinely think she thinks he’s talking about Aegon, her son. And I think she’s furious. She’s like, “After all that?” But Viserys is on his deathbed; that’s what he requested, and so she must follow it through. Whether that’s unconscious wishful thinking, I don’t know, but that’s how I played it.

Emma, this is shifting gears pretty dramatically, but there’s a video clip of you telling Olivia that your favorite drink is “a Negroni Sbagliato with prosecco in it” that went viral on TikTok and Twitter and inspired a number of articles. Is this something you’re aware of?

D’ARCY I thought it’d be quite funny to be drinking one right now, but I’m not. [Laughs.] I keep thinking I should tell my mum that I’ve become a meme in the hope that she’ll be happy for me, but I’d have to explain what a meme is, and I’ve decided it’s too much effort.

I feel so embarrassed. Because in those interviews, when we’ve been at it for six hours, I’m honestly only trying to make Olivia laugh.

COOKE [Laughs.] Is that right?

Speaking not as your characters but as yourselves: Whom would you side with? Alicent or Rhaenyra?

COOKE It’s funny: The whole point of this story is that these two women have been split apart and people have been forced to take sides. Now the whole internet is doing the exact same thing, even though “House of the Dragon” is supposed to be a cautionary tale. I’d like to think that I wouldn’t pit either of them against each other. [Pause.] But yeah, probably Rhaenyra. [Both laugh.]

D’ARCY I don’t know the answer to that. I’m married to my uncle. Who’s to say?