Sandra Bullock might be taking a break from acting to spend time with her family, but she jokes there’s one sequel that might get her back to work sooner rather than later.

Speaking with FOX 5 New York alongside her Lost City costar Daniel Radcliffe in an interview that aired Thursday, the actress, 57, joked that she’d be down for Speed 3.

“Speed 3: Horsepower. My friends have been pitching it to me,” Radcliffe, 32, said with a laugh.

“If Daniel would direct Speed 3: Horsepower … ” said Bullock, while her costar quipped, “Don’t threaten me with a good time.”

The Harry Potter alum, 32, went on to say he’d “love” to direct Bullock — and she envisions him as a “posh” director who wears a “monocle,” she said.

“And you have vests with lots of pockets,” she told Radcliffe. “That’s what will get me out of the house, right there.”

Never miss a story — sign up for PEOPLE’s free daily newsletter to stay up-to-date on the best of what PEOPLE has to offer, from juicy celebrity news to compelling human-interest stories. 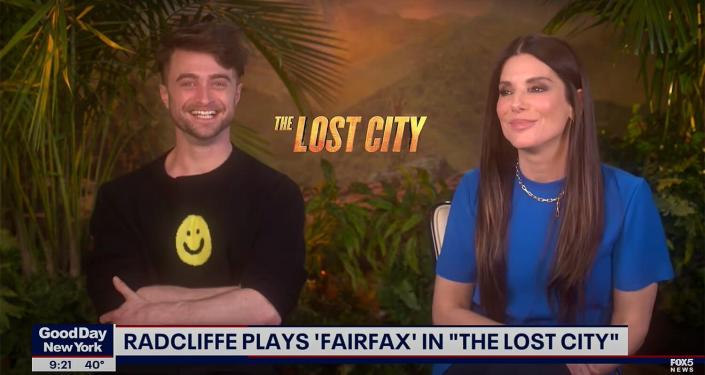 The pair’s banter over a potential third installment in the Speed franchise is clearly a nod to comments Bullock recently made about wishing she “hadn’t done” Speed 2.

During a recent interview alongside Radcliffe for TooFab, the pair was asked if there are any films they were initially “embarrassed” to do but “came around to” after seeing how fans reacted.

“I have one [that] no one came around to and I’m still embarrassed I was in,” Bullock replied. “It’s called Speed 2. I’ve been very vocal about it. Makes no sense. Slow boat. Slowly going towards an island.”

“That’s one I wished I hadn’t done and no fans came around that I know of, except for you,” she added, referring to the interviewer, who said that he loved watching the movie as a teenager.

“I feel like it had a kind of cult love as well,” Radcliffe interjected, to which Bullock quipped, “Very quiet! Like five people. Him and the other four 12-year-olds who were watching the slow boat going towards the tiny island.”

Radcliffe himself is a self-professed “big fan” of Bullock’s — as is his longtime girlfriend Erin Darke, who recently got to meet Radcliffe’s costar at the comedy’s premiere in New York City.

“At the premiere the other night, I was like, ‘We have to make sure you meet.’ And they did. It was very, very exciting,” Radcliffe said Monday during an appearance on The View.

The actor also said he and Darke, 37, watch Bullock’s 1995 romantic comedy While You Were Sleeping over the Christmas season “every year,” adding, “So it’s a very big deal that I’m working with Sandra.”

As for Radcliffe’s performance as a villain in The Lost City, Bullock recently told Entertainment Weekly that fans will be surprised.

“He’s so crazy handsome and devious. I don’t know how to explain him,” she said. “But you wouldn’t think that he plays sinister so beautifully and calmly and in such an attractive way.”