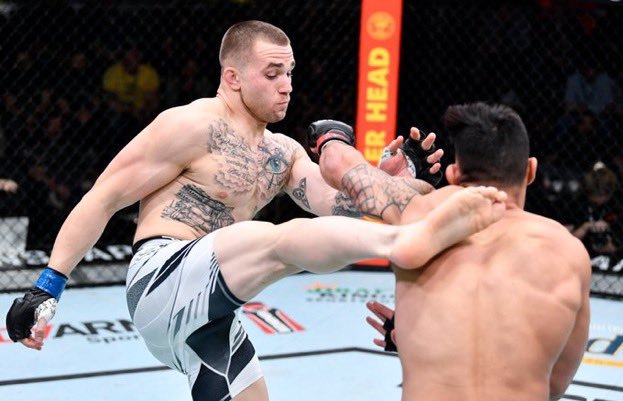 Nick Maximov is one of the rising prospects in the MMA world. Training under the tutelage of the great Diaz brothers, Maximov has been getting all the right mentoring to make him a UFC superstar. The fighter is currently undefeated in his professional career and holds a record of 8 wins and no losses.

Maximov was one of the few fighters to call out the undefeated UFC fighter Khamzat Chimaev on social media. In a recent interview with renowned MMA reporter Ariel Helwani, Maximov gave his reason for calling Chimaev out.

He said,” Well, it’s just funny because. He’s literally called out everyone in the welterweight division and no one’s saying anything. It’s like someone’s got to say something. He’s walking over everybody in the whole division. He’s literally talking over everybody and nobody’s saying a thing and it’s just like, how are you just gonna let him say that the whole time?”

Maximov added, “He’s a good fighter, but it’s like I mean at least try. Is somebody gonna try to beat him? You know what I mean.”

Before his fight got booked against Gilbert Burns, the ‘Borz’ called out many UFC fighters on social media. Some of the fighters he has called out are Kamaru Usman, Colby Covington, and Brock Lesnar.

Khamzat Chimaev will take on the former title challenger, Gilbert Burns, in a welterweight bout on the 9th of April. The fight will take place at UFC 273, which is headlined by Alexander Volkanovski and Chan Sung Jung.

What’s next for Nick Maximov?

Nick Maximov made his UFC debut at UFC 266 last year and beat welterweight fighter, Cody Brundage, by unanimous decision. His second fight at the UFC was a win against Punahele Soriano at UFC Fight Night 200. Maximov has shown great skill in both his UFC fights and is extremely skilled on the ground.

Nick Maximov has not called out anyone except for Khamzat Chimaev after his recent win and neither have there been any rumors about his next opponent. However, former middleweight champion, Chris Weidman could be next for Maximov if he plays his cards right.

Who do you think Maximov will fight next? Let us know in the comments section below.