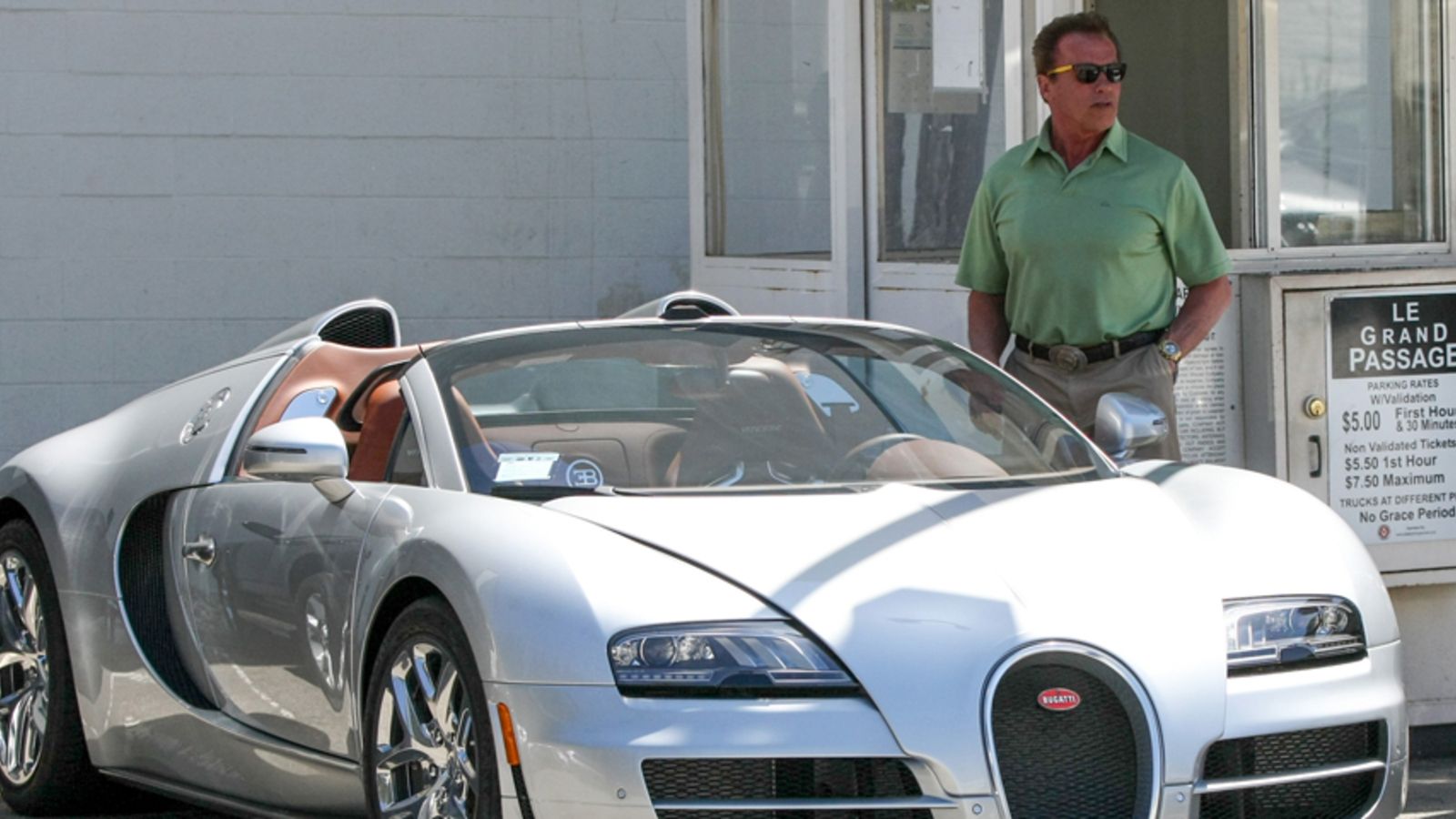 Arnold Schwarzenegger and Sylvester Stallone are Hollywood legends who have been in the movie scene for nearly fifty years. The two iconic action heroes were the best in their heyday, pulling off breathtaking stunts and gun control. But as they rose to prominence in the ’80s, rivalry ensued between them, and it lasted for close to two decades.

While Arnold and Sly may see each other as on-screen competition, we will focus on who has a better garage. With both actors having a net worth of over $400 million, they have held nothing back when it came to lining their garage with some of the most exotic and expensive cars on the planet. Stallone and Schwarzenegger’s car collections say a thing or two about their personalities, but they also show who’s the bigger gearhead.

Related: Arnold Schwarzenegger Vs The Rock: Who Has The Cooler Cars

This 2012 SLS AMG is a silver convertible with a 6.2-liter V8 engine that puts out 563 horses and 479 lb-ft of torque. Arnie was spotted cruising his Mercedes-Benz SLS AMG Roadster which tops out at 197 mph, around Beverly Hills.

Related: Why The Mercedes-Benz SLS AMG Is The Coolest Supercar Of Modern Times

Stallone owns a fifth-generation Ford Mustang that some may consider inferior today, but with the custom touches, you can hardly tell which year it is made. The roll bar, body kit, all-black wheels, and even the red/black paint job bring back memories of the original Mustang from the 60s.

To make the Ford Mustang more personalized, the seats are embroidered with Sylvester Stallone’s “SS” insignia. The Vortec supercharged 4.6-liter V8 engine under the hood pushes out 550 horsepower and 320 lb-ft of peak torque. Stallone was spotted in his custom Ford Mustang convertible in Los Angeles, heading to what appears to be a birthday party.

See also  Revolver by The Beatles has just been remixed and re-released — but is it scraping the bottom of the barrel?

The Bentley Continental GT SuperSports is highly sought-after for its sleek appearance and high-revving engine, but only a few men like Arnold can afford to splash around $320,000 on this luxury. Although the exterior of Arnold’s SuperSports convertible is all-black, the Governator seems to be a big fan of red interiors, because his Challenger SRT8 and Porsche 911 Turbo also come in this color.

Stallone’s Mercedes-Benz SL65 AMG is a mark of engineering brilliance that’s rare to come by. The luxury amenities are complemented by the monstrous power from the 6.5-liter V8 engine.

The base SL65 AMG engine blasts out 661 hp and 738 lb-ft of peak torque, which is great, but the curb weight of 5,000 lbs seems too heavy for a two-seat coupe. So, Stallone opted for the limited edition SL65 AMG Black Series, which weighs about 550 lbs lesser, thanks to the carbon-fiber composite material, larger turbo, and modified wastegates.

Related: This Is What The 2005 Mercedes-Benz SL65 AMG Costs Today

Arnold Schwarzenegger wears many hats, but what you may not know is that he is an environmental activist and strongly advocates for tackling climate change. With this in mind, it shouldn’t come as a surprise that Schwarzenegger spent a whopping $143,000 on a 2010 Porsche 911 Turbo Cabriolet, which has an electric-powered wind deflector.

With a carbon dioxide emission rating of 309g/km, Arnold probably won’t save any cash on road tax, but he certainly contributes his quota to making the environment more sustainable. The 3.8-liter inline 6-cylinder engine pumps out 500 horsepower and propels the vehicle to 62 mph in 3.8 seconds.

The 2010 Porsche Panamera is a very spacious four-door gran turismo that’s often described as an undeniably sleek and sporty automobile. So, it’s no wonder Hollywood stars including Stallone and others like Rob Kardashian, Matthew Perry, Lindsay Lohan, and Andres Torres, have a Panamera in their garage.

Stallone’s 2010 Porsche Panamera comes with a 4.8-liter V8 engine that makes 400 horses, and launches to 60 mph in 4.6 seconds. The Panamera’s ride quality is just like that of the tightest BMWs.

Related: These Are The 10 Coolest Features Of The Porsche Panamera Turbo

Arnold Schwarzenegger is a big guy, so it’s not surprising that he usually goes for larger cars than low-slung ones. But then, even the 6 ft 2 in actor can’t resist the sleek design and monstrous performance of the Bugatti Veyron Vitesse.

This hypercar is a 2015 model that spits out an astonishing 1,200 hp and 1,106 lb-ft of peak torque from an 8.0-liter 16-cylinder engine. Schwarzenegger settled for a silver Veyron that costs roughly $1.7 million, making it the most expensive ride in his garage.

The Ferrari 599 GTB Fiorano is a true grand tourer for people who want to have all the luxury a car can offer, but don’t want to come off as show-offy. Ferrari produced only 3,500 599 GTB Fiorano from 2006 to 2012, so it’s a rare sight on the road today. But that just makes it more appealing to a sports car aficionado like Stallone.

It’s not hard to see that Arnold Schwarzenegger has a fondness for heavy-duty off-roaders, as he owns a brawny Hummer H1 and a Mercedes Unimog. The power of the Unimog U1300 stems from a 6.4-liter turbo-diesel I6 engine.

The one-of-a-kind frame is mounted on a 1977 chassis and rides on 22-inch wheels. Arnold spent around $369,000 on this head-turner that can accommodate four occupants. This off-road beast can perform arduous tasks like rescue operations, and fighting forest fires.

Stallone is one of the most hard-working and bankable stars in Hollywood, so splashing $385,000 on a 2003 Rolls-Royce Phantom is not too much. Stallone’s Rolls-Royce Phantom is complete with 21-inch new model wheels, umbrella stowage in rear doors, lambswool overmats and the ‘RR’ logo that has become the symbol of luxury.


Peter Akpejeluh is a content writer with years of experience in the automotive industry. His love for cars makes crafting colorful stories around them quite effortless. When Peter is not developing automotive content, you can find him taking one of his favorite cars for a spin.

Ruben Randall - March 12, 2022 0
TV/Movies
It's the 2022 Spring Semester and we are heading out to schools with our awesome program with Nothing Bundt Cakes to honor and reward our awesome...