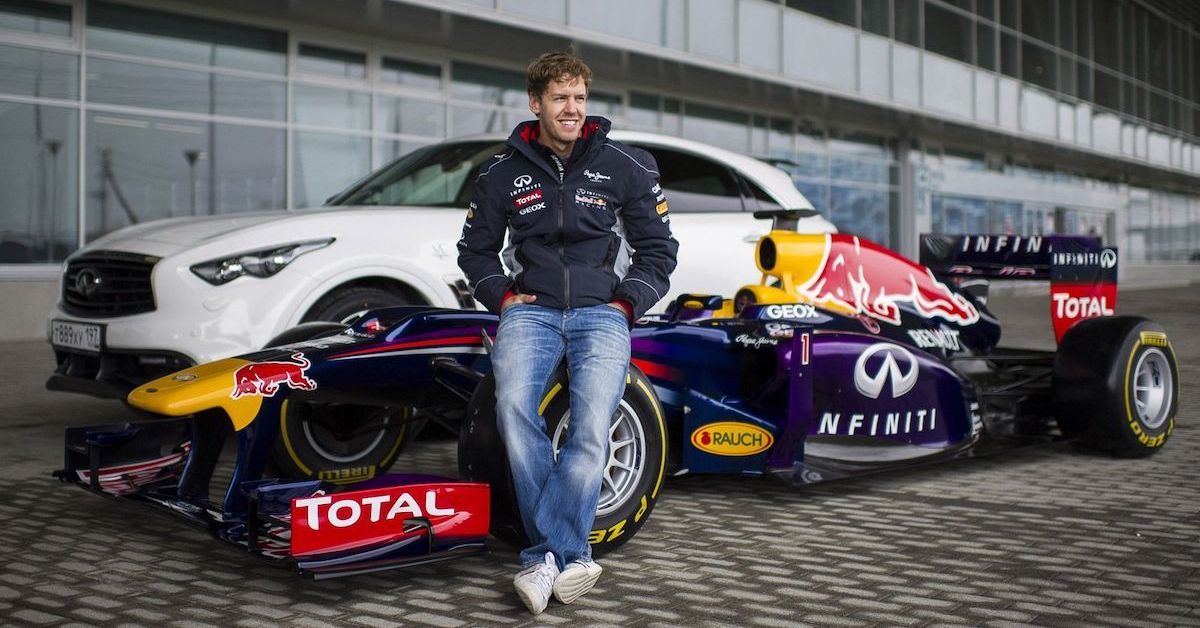 He shines on the track with his speed and talent. Outside in the real world, he has an impressive car collection that would put many to shame. Sebastian Vettel is what many of us wanted to be when we grew up; a world-renowned racecar driver and a petrol head with a net worth to leave all in awe!

The popular German Formula One racing driver started his career driving go-karts back when he was just 3 years old! Fast-forward to today, and the 35-year-old has managed to win 4 World Championships, making him one of the most successful F1 drivers in history. He has worked with some of the biggest names in F1 including Red Bull Racing, Ferrari, and Aston Martin.

His success is also reflected in his overall net worth. Although the majority of his earnings come from his driving salary and various endorsements, a large chunk of change is also derived from his impressive car collection. What is Sebastian’s net worth, and what can you find in his car collection?

What Is Sebastian Vettel’s Net Worth?

As of 2022, Sebastian Vettel’s net worth is estimated to be $140 million, including a modest $7 million farmhouse in Thurgau Canton, Switzerland. He ranks 10th among the richest F1 drivers of all time. The majority of Vettel’s wealth comes from his career as a professional Formula One driver, while his salary is estimated to be around $15 million a year, excluding bonuses and sponsorships.

In 2020, when he was still under Ferrari, this figure was closer to $50 million in the first year and $30 million in the following years. But the German took a huge pay cut when he decided to move to Aston Martin in 2021, with his new salary being just a third of what he was earning at Ferrari.

While the figures may seem large to us regular folk, it’s actually quite small in comparison to what some other top drivers in F1 are earning. For example, Lewis Hamilton is reportedly earning $55(£41.5m) million a year from Mercedes.

In addition to his driving salary, Vettel also earns a significant amount of money from endorsements. Though being a private person, he has managed to get endorsements from renowned brands such as Casio, Infiniti and Pepe Jeans. He earns around $300,000 from these endorsement deals as per Forbes.

Sebastian tries to stay away from the limelight and prying eyes of the press as much as possible. He doesn’t have any social media account and has no intention of joining Twitter or Instagram.

While Vettel’s car collection is not as large or eclectic as some of his fellow drivers, it is nonetheless very impressive. Not only does he have some of the most popular and expensive cars on the market, but he also has a few very rare and unique ones as well.

Given that he was a Ferrari driver for many years, it’s no surprise that he owns a few of their cars. In fact, he has several Ferraris in his collection, including a 2016 Ferrari LaFerrari, 2004 Ferrari Enzo, 1996 Ferrari F50, 2016 Ferrari F12tdf, 2015 Ferrari 458 Speciale and a Ferrari California T. He also has a Mercedes-Benz SLS AMG, Mercedes-Benz SL65 AMG, a Mini Countryman, Infiniti FX, Renault Megane RS RB8, Fiat 500 and a BMW Z8 Roadster.

Heading into the 2021 season as the newest member of the Aston Martin F1 team, Vettel announced that he would be selling off his Ferrari collection. The move came as something of a surprise given Vettel’s long history with the team, but it seemed that he was ready for a new chapter in his life. All the cars were located, registered and their taxes paid for in Switzerland.

What Is The Total Worth Of Sebastian Vettel’s Car Collection?

Well, it’s difficult to estimate the value of an entire car collection, but we can take a look at some individual cars to get an idea.

All in all, Vettel’s car collection is worth an estimated $13 million.

In conclusion, as you can see, Sebastian Vettel’s net worth is not only derived from his F1 salary but also his impressive car and bike collection, as well as endorsement deals. He is a very private person who doesn’t like to show off his wealth, but there’s no doubt that he is one of the richest drivers in F1.

We can only imagine what he will do with all that money when he hangs up his racing gloves for good. Until then, we wait and see!


Johnte Brown is an avid gearhead. When he’s not writing about cars, he can be found wrenching on them or racing them at the track. He loves watchin sticoms, Dwight K. Schrute, specifically.

Arnold Schwarzenegger’s Son Joseph Baena Recalls The Day The World Found Out About Who...

Lisa Banfield is the target of innuendo, misinformation, and lies, much...