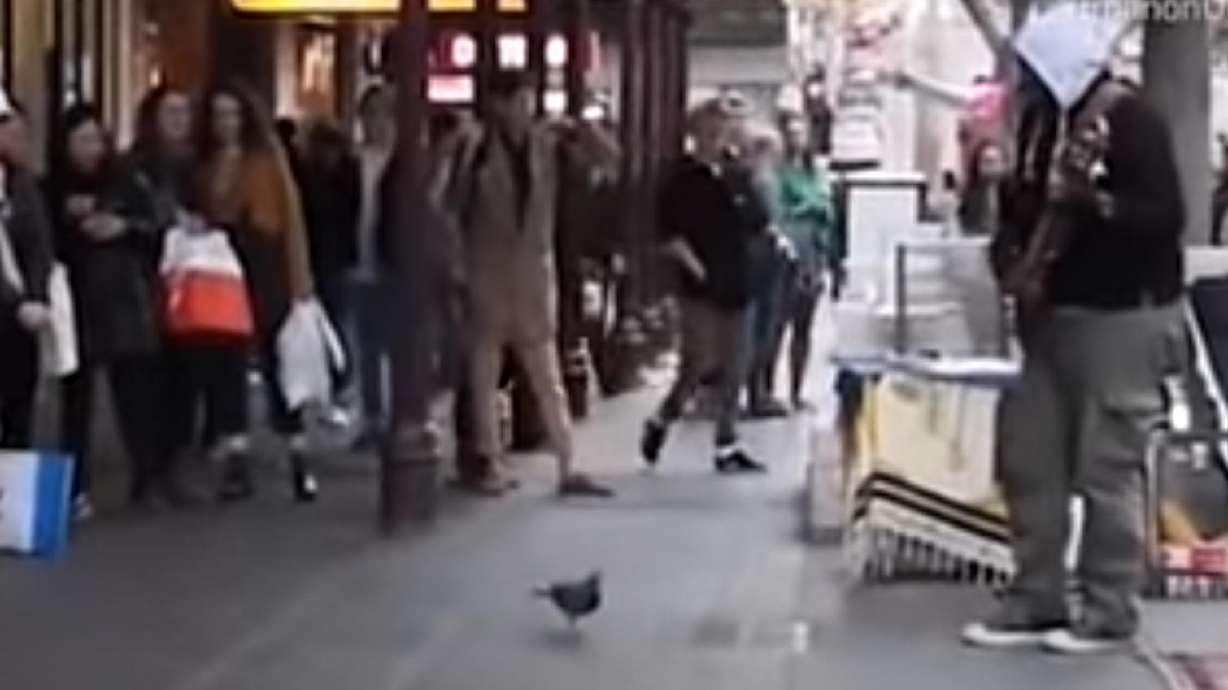 The pigeon appears to have been filmed on the street as it enjoyed listening to a busker playing Robin Thicke’s Blurred Lines in this video posted to YouTube in January 2019. (Pigeon Radio Australia via YouTube)

THE SIDEWALK — Playing music on the street and hoping you get a few bucks, or even make a living, probably isn’t easy work.

But if you’re skilled and/or entertaining, you probably have great days full of validation and cash reward. People may stop to listen, or maybe a cute kid does a dance, and everyone feels a little happier, resulting in loose pockets and a little cash in the hat.

The Melbourne busker in this video definitely had a good day. He gained a fan that listened and danced, but it’s zero percent what you’d expect. Because the dancing music lover is, in fact, a pigeon.

It’s true. The clip shows the pigeon looking directly at the guitar-playing busker while it’s bopping and walking to the beat. Of course, everyone’s into it. And yes, you will be into it, too.

I can’t scientifically tell you why a pigeon would do this, but I do have a conspiracy theory to explain what’s going on — buckle up.

The bird is, in fact, Bert (as in Bert and Ernie) from “Sesame Street.” He was tired of the other muppets razzing him for his classic “Doing the Pigeon” song and dance. One day he just snapped. He disappeared from his shared apartment with Ernie and skulked into the secret lab under Oscar the Grouch’s trash can (because we know it’s not just trash in there).

See also  Love Is Blind: Where & When Season 2 Was Filmed

Burt sacrificed friendships, trips to Mr. Hoopers, and his own sanity to solve the problem of being mocked for his love of pigeons. Eventually, he did it — he turned himself into a pigeon. So, as stated above, the bird in the video is Bert, who is finally “Doing the Pigeon” in peace.

It all makes sense now.

Martha Ostergar is a writer who delights in the ridiculous that the internet serves up, which means she’s more than grateful that she gets to cruise the web for amazing videos to write about.