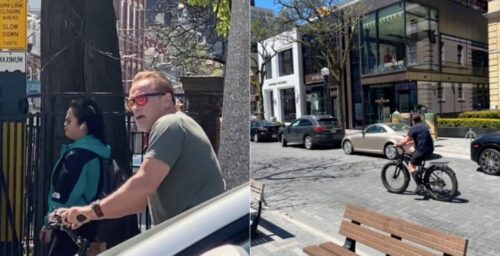 Arnold Schwarzenegger has been spotted around the city, visiting restaurants, filming for a new Netflix show, and, now, he’s been spotted cycling through downtown.

The Terminator star is reportedly filming a new spy comedy for Netflix. Schwarzenegger clearly isn’t shy about finding his way around the city. Most recently, he was seen cycling along University Avenue.

One fan even ran after Schwarzenegger as he biked through Yorkville.

The former California governor was seen dining at Akira Back inside the Bisha Hotel earlier this week. He took the time to pose with staff while he was there.

His son, Patrick Schwarzenegger, has also been spotted about town as he’s filming a spinoff of Amazon’s The Boys in Mississauga.

Ruben Randall - March 24, 2022 0
Money
As one of the most respected names in music history, Clive Davis has not only seen it all, but discovered and fostered some of...