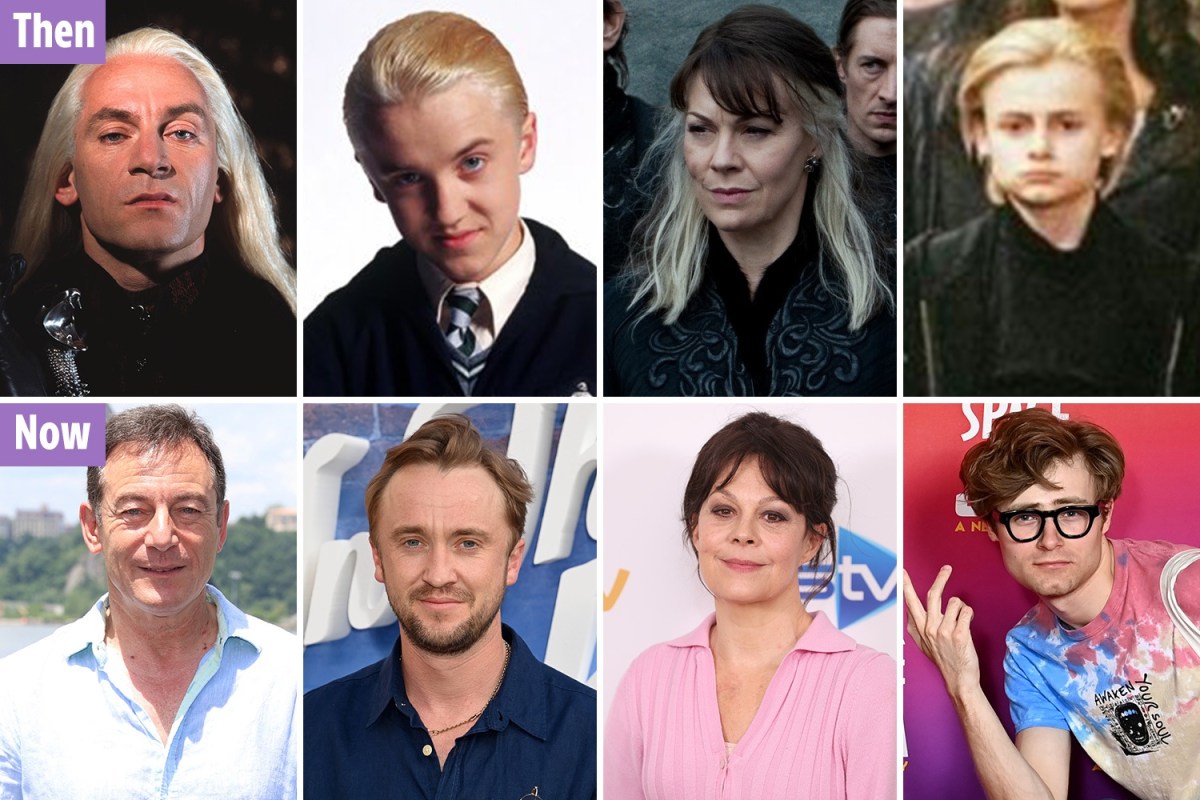 HARRY Potter fans will know that Voldemort was not the only villainous character their favourite childhood wizard had to face.
There are many candidates for the role of the worst wizard, but Draco Malfoy is the one that caused the most trouble for Harry at Hogwarts.
11The powerful Malfoy familyCredit: Warner Bros
Draco – with his tendencies to practice dark magic and insufferable arrogance – often clashed with much-loved protagonist Harry on screen.
We’ve taken a deep dive into Tom Felton’s life and film family since Harry Potter ended to honor his 34th birthday yesterday.
It’s all here: drug addiction, Hollywood success, tragic deaths, and everything in between.
Draco Malfoy – Tom Felton
11Draco Malfoy was played by Tom FeltonCredit: Warner Bros
11Tom has gone on to star in a number of films since Harry Potter
Tom Felton was born in Surrey, England, on September 22, 1987.
From a young age, he began his career in TV ads. In 1997, he made his silver screen debut in The Borrowers as Peagreen Clock.
Tom was cast in Harry Potter and the Philosopher’s Stone, 2001. He appeared in all seven sequels, until the final film in 2011.
From April 2008 to early 2016 the Draco star was with Jade Olivia Gordon (34) a stunt assistant.
She appeared briefly alongside her beau, playing Draco’s wife Astoria in Harry Potter and the Dealthy Hallows Part 2.
Tom has been in many films since his Harry Potter days.
In January 2021, it became clear that he would be playing the lead in Sara Sugarman’s Save The Cinema. Filming began in spring.
The star kept busy during a coronavirus lockdown, releasing his first EP YoOHoO to his fans on social networks.
Lucius Malfoy – Jason Isaacs
11Lucius actor Jason battled drug addiction off screenCredit: Warner Bros
11The star quit drugs and alcohol after battling addicitonCredit: Getty
Harry Potter is just one of the noteable roles that Lucius actor Jason, 58, has under his acting belt – having starred in plenty of Hollywood films.
He played the role of Michael D Steele, Captain Hook and the Grand Inquisitor on Star Wars Rebels.
After a few years, the star was cast as Dr Paul Griffith on CBS’ Good Sam in March 2020.
Jason revealed last year that he had battled a “decades-long love affair with drugs”.
When he was just twelve years old, a bartender gave him a bottle Southern Comfort.
Jason shared his story with the fans. He said: “The next morning I woke with a splitting headache, stinking with puke with large scabs and the memory of having utterly ashamed myself.
“I just know I chased the sheer ecstatic joy I felt that night for another 20 years with increasingly dire consequences.”
Jason struggled with alcoholism for a while before finally deciding to quit work and get sober.
He tweeted to fans in August 2020: “Please don’t anyone congratulate me or tell me they’re proud of me. I am and was useless by myself. Pride’s the worst part.”

Narcissa Malfoy – Helen McCrory
11Helen McCrory played Narcissa in the final three filmsCredit: Warner Bros
11Helen tragically passed away in 2021Credit: Getty
Helen McCrory played the role of Narcissa Malfoy in the final three Harry Potter films – but it was not her only star-studded role.
After her success in West End shows, she was cast in Skyfall as Clair Dowar.
Helen was cast in the iconic role of Polly Gray in Peaky Blinders. She played this role from 2013 until 2019.
Tragically, the actress was diagnosed and died from cancer on April 16, 2021 at her London home. She was 52 years old.
Her husband and fellow actor Damian Lewis took to Twitter to announce her tragic death, revealing she had been “peacefully at home, surrounded by love”.
Before her death, Helen worked alongside her husband to suport the Feed NHS programme, raising nearly £1million for charity .
In 2017, she was made an Officer of the Order of the British Empire. She was also awarded the OBE in the New Years Honours List.
Scorpius Malfoy – Bertie Gilbert
11Bertie was seen as a child in the Harry Potter FilmsCredit: Warner Bros
11Bertie is now an independent film makerCredit: Getty
Bertie Gilbert was just a child when he starred as young Scorpius Malfoy in the Harry Potter films.
After starring as Scorpius Malfoy in Harry Potter and the Dealthy Hallows, Part 2, the 21-year-old star has gone on to be a filmmaker.
Bertie has made dozens of short films, including Stray Dog, which was not only his directorial debut but also the film in which he starred.
On his website, the star described himself as “the best filmmaker in the world” ahead of his award nomination in 2021.
Bertie wrote of film: “PLEASE CARE!: Baby’s first BAFTA qualifying festival! Very pleased to share that PLEASE CARE! will be playing at @norwichfilmfestival.”
Bellatrix Lestrange – Helena Bonham Carter
11Helena is well-known for her role as BellatrixCredit: AP:Associated Press
11She has starred in a number of films and has a plethora of awardsCredit: Getty
Bellatrix Lestrange, who is related to the Malfoys through Narcissa, was played by the iconic Helena Bonham Carter.
The 55-year-old actress has starred both in blockbuster movies and in the Potter series.
The list goes on, from Charlie and the Chocolate Factory to Alice in Wonderland to Les Miserables, Corpse Bride to Corpse Bride to Sweeney Todd, Charlie and The Chocolate Factory to Alice in Wonderland – the list is endless.
Helena was nominated for Academy Awards and Golden Globes nominations, as well as a BAFTA and Critics Choice award.
In season three and fourth of The Crown, Helena played the role of Princess Margaret.
In 2020, she was also a part of Enola Holmes alongside Stranger Things star Millie Bobby Brown.
After meeting on Planet of the Apes in 2001, Helena started a relationship with American film director Tim Burton. They now have two children. In 2003, they welcomed Billy Raymond and Nell.
In 2014, the couple announced they had “separated amicably” with Helena insisting they would likely still work together.