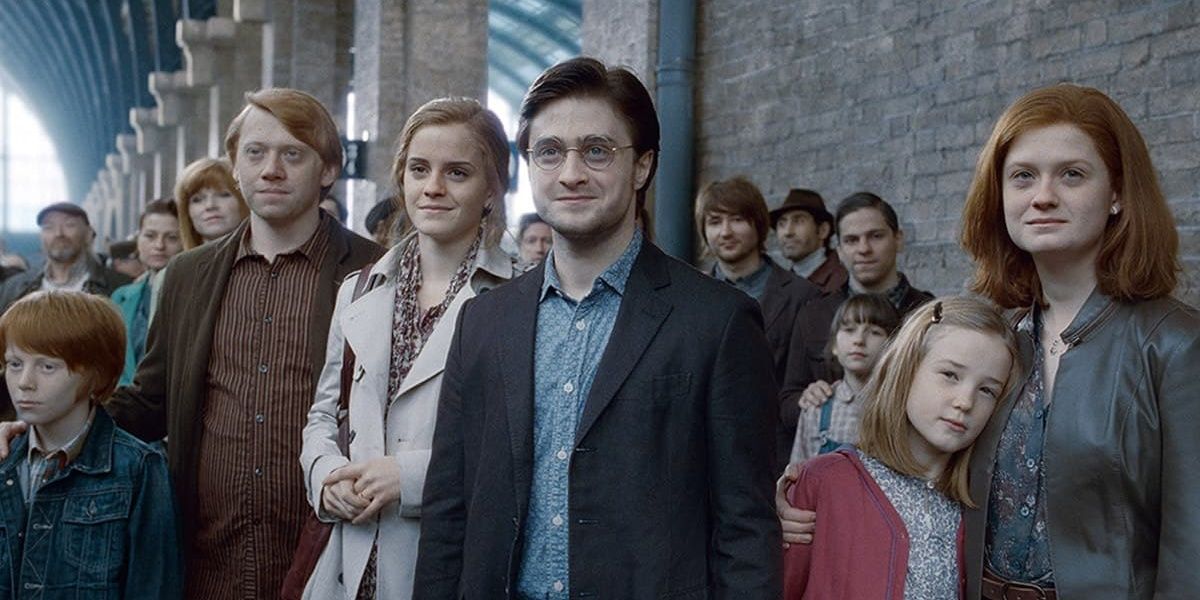 If Harry Potter existed in the real world, his Hogwarts days would be far behind him, and the Boy Who Lived would now be the Wizard In His 40s. It may be hard to think of Harry as anything other than a student, but fans know that even in the Harry Potter canon (starting with the flash-forward scene at the end of the books), he has grown up, launched a new career, married, had kids, and sent them to Hogwarts, too.

RELATED: The 10 Best Harry Potter Companion Books Of All Time

Thanks to Pottermore and The Cursed Child, and the tireless devotion of Harry Potter fans, though, we know a surprising amount about where the main characters went post-Hogwarts, and what they are doing with their lives now. We can even figure out just how much they would be earning, in Galleons and dollars, based on the research of a Redditor who created an exchange rate, some extra details, and a few logical conclusions from standard UK career salaries.

Neville became the Herbology Professor at Hogwarts, but lived in Hogsmeade, above the Inn – so unlike Dumbledore, he would have had some living expenses to pay out of his salary as well. GlassDoor places the average teacher salary at around £33,500 (around $46,500), which would be around 1860 Galleons a year.

Ron was only an Auror for a short period of time after leaving Hogwarts, where he worked alongside Harry. However, after this, he went on to work for his brother at Weasley’s Wizarding Wheezes. During his time as an Auror, though, he probably earned around 1600-2000 Galleons, based on the average earnings of intelligence, miliary, and police officers in the UK. As a shop assistant, of course, his salary would be very dependent on the generosity of his brother!

Like Ron, Harry became an Auror – and would have earned around the same money as a result. Of course, given that he married Ginny, who was likely raking it in thanks to the Hollyhead Harpies, he wouldn’t really have been hard up for cash.

Then there’s the fact that even before working, Harry was independently wealthy (although the reasons for that aren’t particularly well explained). Some estimates put his net worth in the millions, but others put it closer to $300,000 at the start, with additional earnings from Sirius Black, and of course, the ownership of a piece of property in the center of London. In short, Harry was never really going to struggle to make ends meet.

After the events of Harry Potter, Luna Lovegood went on to marry a descendant of none other than Newt Scamander, and she and Rolf Scamander became magizoologists together. The series doesn’t say what a magizoologist would earn, but assuming it is comparable to a muggle zoologist, it’s possible to work it out. GlassDoor puts the average earning for a zoologist at around 50K (or £36,000). That’s around 2,000 Galleons a year.

It’s incredibly difficult to guess at the kind of earnings that George Weasley would have pulled in, as a shop’s profits can vary hugely depending on the products sold and how successful they are! From the books, it’s known that Weasley’s Wizarding Wheezes was incredibly popular, to the extent that the brothers were considering opening up a second location in Hogsmeade. The average ‘shop owner’ salary on GlassDoor would be just under 70K a year, which would be 2800 Galleons, but this could be wildly different. However, it can be worked out that the original loan from Harry to open was 1000 Galleons, which would be around $25,000 – and that Ollivander’s was estimated to make around $26,000 a year, based on how often students need wands.

It’s also difficult to know how much a Headmaster would make, especially given that Headmasters’ salaries in the UK vary hugely depending on the school, and a private school headmaster makes significantly more money. Assuming an average of £55,000 (a little over $75,000), that would be 3000 Galleons a year.

RELATED: 10 Best Characters In Harry Potter And The Sorcerer’s Stone

Of course, it’s also implied that the Headmaster also lives at Hogwarts, like most of the teachers, so there would be no living expenses or bills to pay on top of that, which makes it worth significantly more.

Hermione leaves school and first starts working in a ‘good’ Ministry position, but by the time of Harry Potter and the Cursed Child, she had worked her way up to Minister for Magic – and no one is surprised! Assuming that the Minister makes about the same as the Muggle Prime Minister (given that they are doing the same job for their respective communities), that would put Hermione at around 8000 Galleons a year, or a little over $200,000.

Like many of the jobs in the magical wizarding world, there is no salary noted for Quidditch players, but given that they are a magical equivalent of footballers in the UK, there is space here for Ginny to have made a huge amount. Endorsements and appearances may also have upped this, in the same way that it does in the real world. However, assuming that Ginny wasn’t an athlete with millions of dollars in endorsements, what might she have earned? She would still be in the super-rich, most likely. According to Statista, average salary depends on team, but can range from 0.9 to 8.7 million dollars a year. If Ginny had even come in someone in the middle of that range, she would be earning around 5 Million a year – or 200,000 Galleons.

Draco Malfoy doesn’t have to get a traditional job on leaving Hogwarts, because his family is independently wealthy – and even in a post-Voldemort world, it seems that he hung onto that fortune. He also married Astoria Greengrass, and did study alchemy, but this was on the level of a personal interest, not a professional calling. According to the original Wizarding World, his family were also worth an incredible amount – which, according to some would come out to $1.6 billion, but according to the reddit math used for the rest of the list, is more like 12-13 million.

Next
MCU: 10 Funniest Goofs & Mistakes That Made It Into The Movies


Rose Graceling-Moore has been writing about film, TV and comics since 2013, when she began writing for a local print magazine in Vancouver, BC. Since then, Rose has written for Horror Honeys, Moviepilot and Quirkbooks as well as Screenrant, increasingly focusing on comic books and live-action comic adaptations, as well as diversity and representation on screen. Rose also co-hosted the DC Movies Podcast, and has guested on other nerd and entertainment podcasts over the past five years.

Rose’s love of comics began all the way back in the early ‘90s, when she discovered the X-Men while living in Africa (where there wasn’t a whole lot to do but read!), and since then has had an on-again, off-again love affair with not just Marvel, but DC and indie comics as well. You can follow her on Twitter: RoseMooreWrites for tweets about comics, movies, and more.

Ruben Randall - September 27, 2021 0
Celebrity
HARRY Potter fans will know that Voldemort was not the only villainous character their favourite childhood wizard had to face. There are...