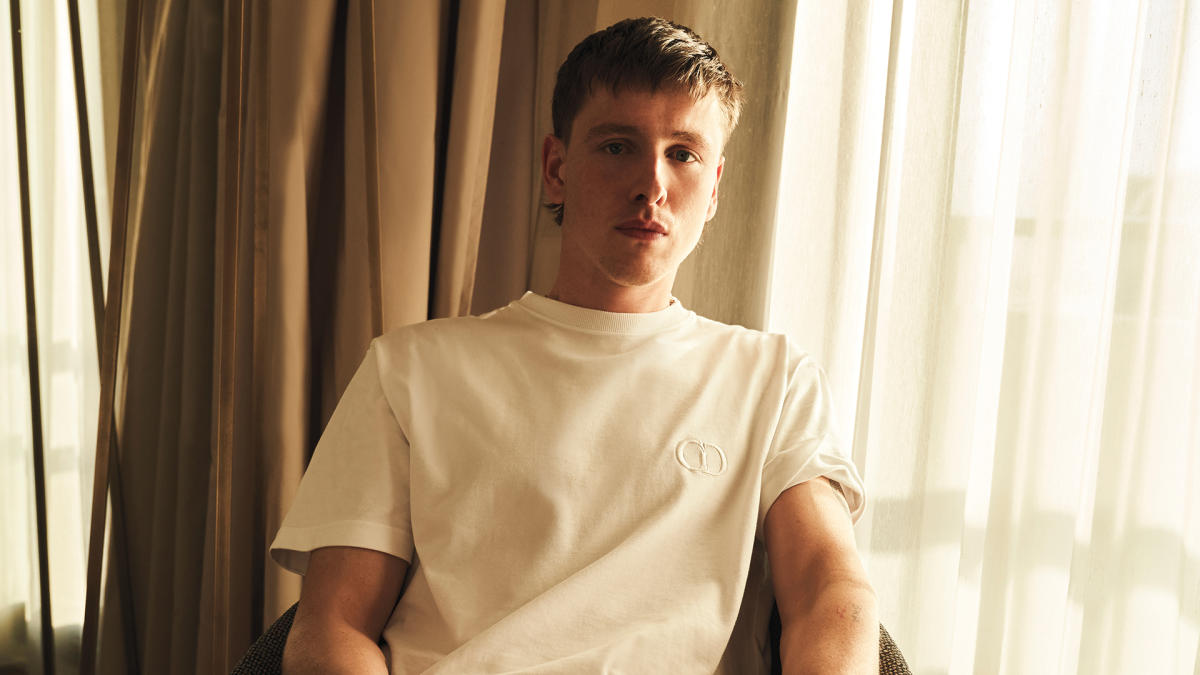 In Hollywood, beauty isn’t just skin deep — it’s a currency. So it’s striking that Harris Dickinson makes fun of his own bountiful good looks in Ruben Östlund’s satirical comedy “Triangle of Sadness,” in which he plays a spoiled male model who goes on a humbling journey. In person, Dickinson cuts a striking figure at 6’2”, with sculpted features and full, cherry lips. But ask this 26-year-old from a working-class, South London family about his own physicality, and he instantly recoils. It’s easy to understand why: to objectify him for his beauty alone is to miss him entirely.

Dickinson is increasingly everywhere — not only in British cinema but also in an impressive number of Hollywood features. His may not be an overnight success, but his popularity has been simmering, and
will soon boil over into stardom. In four years, he’s had leading roles in indie hits like Joanna Hogg’s meta romance “The Souvenir II” and studio fare like Sony’s psychological murder mystery “Where the Crawdads Sing.”

In “Triangle of Sadness,” he plays Carl, a Gen-Zer hustling for work while quietly raging against the frivolity of unchecked capitalism. In the film’s opening scene, he struts up and down, bare-chested, for
an audition in which he’s asked to lower his “triangle of sadness” — the middle bit between his eyebrows. But in the pic’s rollicking third act Dickinson steals the show, when Carl, who has booked passage on a yacht for the ultra rich, engages in a steamy liaison in a lifeboat with a toilet manager named Abigail, played by veteran Filipina actor Dolly De Leon. “Even after the screening of ‘Triangle’ in Cannes,” he says, “I can see it in people’s eyes: They see me and Carl as the same person.” That is, heart-racingly — maybe even painfully — hot. He adds, with a hint of disapproval, “Even people I made the film with.”

It’s July in London, and above 100 degrees outside. The government has urged people to stay home, but the actor has shown up at the Ham Yard Hotel anyway, which is normally bustling with media types but is eerily empty. Seated at a table in the corner, he’s straightforward, friendly and confident, with the grace of a cat and a sudden, dazzling smile. And yet he keeps a polite, professional distance. He’s so serious and thoughtful, in fact, that it’s surprising when he says that he’s “very silly as a person,” without “any reservations” about humiliating himself.

Dickinson showed his silly side to “Triangle of Sadness” director Östlund, who more than once turned his camera away from the main action of a scene to catch the actor’s hilarious antics. “There’s a real freedom in being involved in a comedy,” Dickinson says. “You can lean into the silliness of who we are
as people.”

He feels the same way — almost nonchalant — about sex scenes. When asked if he had an intimacy coordinator for his breakout movie, Eliza Hittman’s “Beach Rats,” he says, “No, no, we didn’t,” and laughs. In general, he says, nudity on jobs “just feels like an extension of being human.”

In “Triangle,” many of Dickinson’s best scenes are opposite Charlbi Dean, who played his girlfriend, Yaya, in the film. But the South African actor died suddenly in August, after a short illness, just two
weeks before the movie’s scheduled premiere at the Toronto International Film Festival, throwing the screening into doubt. Dickinson, though, was there for his fellow actors.

“I definitely had some trepidation,” he says about going to the premiere. “It didn’t feel like the right time to be at a film festival.”

But De Leon says Dickinson’s presence in Toronto, where he threw a protective arm around her onstage during Östlund’s emotional introduction of the film, “really mattered.”

See also  MrBeast Net Worth 2022: Is the YouTuber a Billionaire After Scaling the 100 Million Mountain?

Graham Bryan, a drama instructor at RAW Academy, met Dickinson when the actor was 12 years old and enrolled in summer school sessions at the East London performing arts school in Walthamstow, where he grew up. Those quickly became weekly sessions in which Dickinson learned improv, Method acting and what’s become the crucible for many British actors with an eye on Hollywood — dialects.

“He’s got an amazing ear, and he will work any accent,” says Bryan. “By the time he left us, he’d completely mastered about 10 different dialects. That’s probably gone up to 20 now. He just never stops.”

Yet when Dickinson, one of four children, whose parents worked as a social worker and a hairdresser, graduated from the London Academy of Music and Dramatic Arts and began auditioning, he struggled to find work he was interested in. “There were a lot of upper-class or royal roles,” he says, “and I felt like I was always searching for other stuff.”

He eventually found what he was looking for in 2017’s “Beach Rats,” a film about a teen struggling with his queerness amid a group of hypermasculine peers. The movie’s working-class Brooklyn setting seemed familiar to him. “It felt like something so far from where I grew up but also quite close as
well,” he says.

De Leon says of Dickinson, “I don’t think he can ever play a part and pretend. Some of acting is pretending, but I think acting is just being, and Harris is really good at that. That’s his strength as an actor: He’s not thinking ahead about what to do or say or how to act — he’s just there.”

Dickinson is trying to be more present in real life too. He raises his eyebrows and exhales when asked about the Cannes premiere, where even friends approached him as if he were someone he wasn’t. “I normally go a bit numb at those things,” he says, “and I don’t cope very well with that kind of stimuli. But I’m trying to shift my perspective and be like, ‘People loved it. This is great.’”

And being an actor so convincing that even your friends forget who you really are is not the worst thing in the world.

Unsurprisingly, Dickinson recently assumed such a convincing North Carolina accent for “Where the Crawdads Sing,” in which he plays the smooth but morally bankrupt love interest Chase Andrews, that executive producer Reese Witherspoon was “a bit confused,” Dickinson says, by his real
British accent.

“Daisy Edgar-Jones and I used to joke about it,” he says of his fellow Brit actor, who stars as Kya Clark in the film. “There were days when we were in the marsh, doing these Southern accents, and we’d both stop and be like, ‘How have we ended up here?’ Because these were such American roles, from such a specific region too.”

“It’s slightly mad at times,” says Dickinson, flashing one of those dazzling smiles. “But I guess we fooled ’em.”

Better Bedder Net Worth 2022 – What Happened After Shark Tank?

Ruben Randall - November 5, 2022 0
TV/Movies
2021 just got a little bit better thanks to Aly and AJ Michalka! The former Disney Channel duo announced that they’d be returning to...