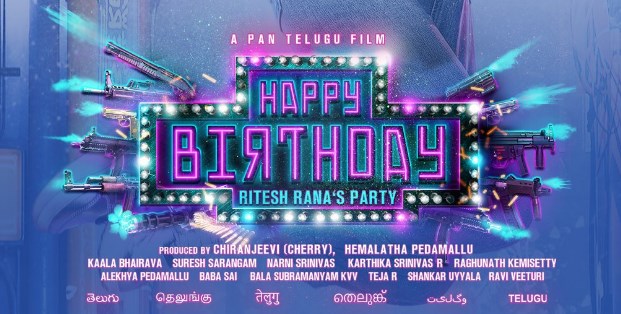 Story:
‘Happy Birthday’ is a new age fictional comedy genre film and the story in unconventional. Defense minister Rithvik Sodhi (Vennela Kishore) leads the movement to amend the Gun laws in India. As a result, gun culture flourishes across the nation and everyone carries a gun or an assault rifle. Set in Hyderabad, the story revolves around the Ritz Hotel. The hotel house keeper (Naresh Agastya) has been hired to replace a lighter which holds significance in the story. Pasupuleti Happy Tripati (Lavanya Tripathi) enters into the pub, gets kidnapped by the guys searching for the lighter. There are other fun threads parallel to the main actors. There is a Russian element added to the core story. Rest of the film revolves around the vault.

Director ‘Ritesh Rana’ repeates his debut film ‘Mathu Vadalara’s screenplay format in ‘Happy Birthday’ as well. The story has been narrated from the characters’ point of view, periodically the story takes different dimension as and when a new character / chapter is introduced. Linking back the new character to the main story in this manner, Taking the proceedings further is an uphill task. Ritesh has mastered this unique method. His subtle punches on various aspects are good but appeal to limited urban audience. Chapters are named after the main characters as Happy , Lucky , Max Pain, BABY and Serena William etc. Vennela Kishore interview is funny, satire on the pub management scenes work, the dialogues on pub customers who are pseudo rich came out well. The three sisters video call with their brother is an extension to the Mathu Vadalara film’s satire on TV serials. But this time the satire fails to generate the intended effect, ends up counterproductive.
The second half is a boring affair after the vault concept begins, gets redundant with Lavanya Tripathi ‘s Jail episodes. Few scenes in climax phase generate some comedy but audience will not be in a mood to enjoy by then.

The art work, set designs are good and match the director’s vision of a quirky film, the music by Kala Bhairava is out of the box to match the theme.

‘Happy Birthday’ is an unconventional film which works partly for a limited set of audience. The director has succeeded in delivering sarcastic humor in an engaging manner in the first half, the screenplay has been smart. But the eccentricity crosses the limit, story goes into boring phase in second half. Overall, a costly futile attempt !

Telugu360 is always open for the best and bright journalists. If you are interested in full-time or freelance, email us at [email protected]

Saxman: Democrats and Republicans Both Have One Big Question to Answer

Ruben Randall - September 21, 2022 0
Actress
EVANSVILLE − A local lawmaker was at the forefront of the Indiana General Assembly's recent abortion debate, and she now faces re-election challenges from...

Find out when ABQ-filmed ‘Flamin’ Hot’ will premiere