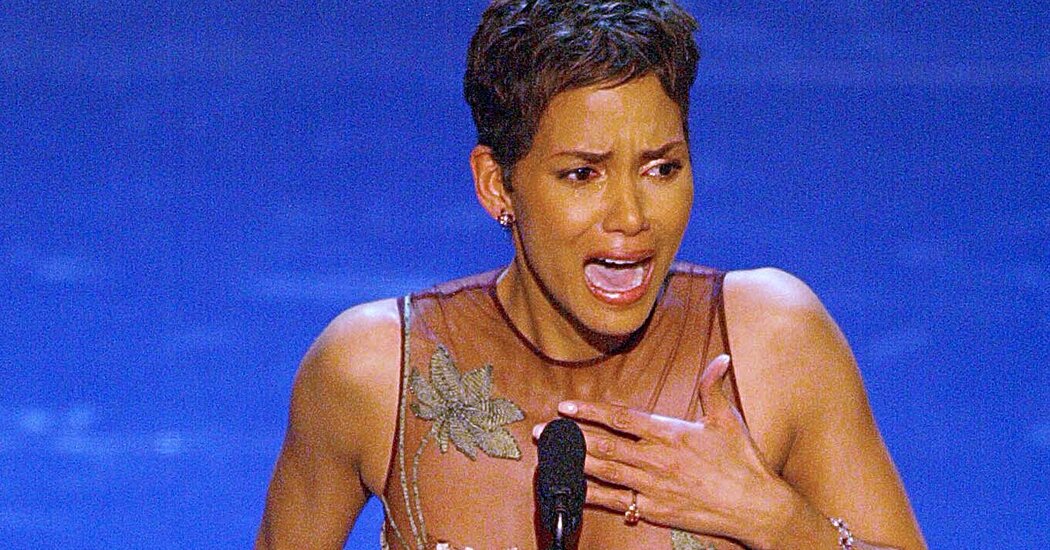 Halle Berry had all but counted herself out.

It was a cool March night in Hollywood in 2002, and she was just excited to have been nominated for her first Academy Award, in the best actress category, for her role as a waitress who has an affair with her convicted husband’s executioner in Marc Forster’s dark drama “Monster’s Ball.”

Up against Nicole Kidman (“Moulin Rouge”), Judi Dench (“Iris”), Sissy Spacek (“In the Bedroom”) and Renée Zellweger (“Bridget Jones’s Diary”), Berry was only the seventh African American actress ever nominated. A win would vault her into the annals of history as the first Black winner.

But Berry never thought it would happen.

“Back in those days, if you didn’t win the Globe, you really didn’t get the Academy Award,” Berry, 55, said in a recent phone conversation, referring to the Golden Globe that she had lost to Spacek. “So I’d pretty much resigned myself to believing, ‘It’s great to be here, but I’m not going to win.’”

But then the previous year’s best actor winner, Russell Crowe, opened the envelope and read her name, the camera zooming in on her teary, shocked face. She took a moment to collect herself, then walked to the stage in her now-iconic Elie Saab gown, the voluminous burgundy train trailing behind her, as the applause went on, and on, and on.

“Oh my God,” were her first words when she finally had breath enough to speak, tears still rolling down her cheeks, hands trembling as she clutched the statuette. She hadn’t prepared a speech. She had no list of people to thank either.

“I don’t have any memory of it,” Berry said. “I don’t even know how I got up there. It was totally a blackout moment. All I remember is Russell Crowe saying, ‘Breathe, mate.’ And then I had a golden statue in my hand, and I just started talking.”

She dedicated the moment to Dorothy Dandridge, who in 1955 became the first African American woman nominated for best actress (for “Carmen Jones”), and to other previous African American nominees like Diahann Carroll and Angela Bassett.

“This moment is so much bigger than me,” Berry told the crowd, adding, “It’s for every nameless, faceless woman of color that now has a chance because this door tonight has been opened.”

At one point, she looked up to the balcony and spotted Sidney Poitier, who in 1964 became the first Black man to win an Academy Award for best actor, for “Lilies of the Field,” and was there that night to receive an honorary award.

The 94th Academy Awards will be held on March 27 in Los Angeles.

“It was so special to have him there,” Berry said in an interview, a few weeks after he died in January at age 94. “He and Dorothy Dandridge allowed me to dream outside my own backyard and believe that a little Black kid from Cleveland could do this.”

When the orchestra signaled her to wrap it up after about three minutes, she resisted.

“It’s been 74 years,” she said onstage, referring to all the ceremonies in which a white actress had won the award. “I got to take this time.” (It would be an evening of long speeches, clocking in as the longest Oscars ever, at four hours and 23 minutes.)

A few moments later, the night entered the history books again: Denzel Washington became the second African American man to win best actor, for his role as a crooked cop in “Training Day,” making the 2002 ceremony the first — and only — time both of the top acting awards went to actors of color.

But in the 20 years since that night, just 12 other Black performers have won Oscars. Though two men — Jamie Foxx and Forest Whitaker — have joined the ranks of African American best actor winners, no other Black women have been named best actress, and it took eight years after Berry’s win for another Black woman to even be nominated in the category (Gabourey Sidibe for “Precious” in 2010).

“It didn’t open the door,” Berry said. “The fact that there’s no one standing next to me is heartbreaking.”

Mia L. Mask, a professor of film at Vassar College and the author of “Divas on Screen: Black Women in American Film,” said Berry’s victory was particularly notable because it came amid a paucity of quality roles for Black men — and even fewer for Black women.

“For a woman of color to win, the film itself has to be a good movie and meet the sensibility of academy members,” she said. “And the performance has to be good.”

The roles historically available to African American performers, she noted, have largely been isolated characters dependent on white benefactors, as was the case with some of the parts for which Black actors won Oscars before Berry: Hattie McDaniel’s Mammy in “Gone With the Wind” and Poitier’s handyman in “Lilies of the Field.”

The carnal nature of the central “Monster’s Ball” relationship between Berry’s character, Leticia, and Billy Bob Thornton’s character, Hank, a white corrections officer, was the target of criticism from another Black actress, Angela Bassett, who told Newsweek in June 2002 that she had declined the part because she “wasn’t going to be a prostitute on film.” (Bassett did not respond to a request for comment for this story.)

Noting that she didn’t “begrudge Halle her success,” Bassett said at the time, “I couldn’t do that because it’s such a stereotype about Black women and sexuality.” (Tom Ortenberg, president of Lionsgate Films, which produced the movie, later said Bassett was never offered the role of Leticia, who was not a prostitute.)

Mask said that today’s audiences are more attuned to the contrivances of “Monster’s Ball” than they were 20 years ago, particularly the restaurant and prison scenes that are strikingly underpopulated, even for rural Georgia. Berry’s character has no church, school or civic groups available for her to even consider joining.

Our Reviews of the 10 Best-Picture Oscar Nominees

“Don’t Look Up.” Two astronomers discover a comet headed straight for Earth. When they pass along the bad news, the president of the United States has other things on her mind to pay attention to than the impending catastrophe.

“Drive My Car.” A theater director grapples with the death of his wife, as he mounts a production of “Uncle Vanya.” A chauffeur assigned by the theater company ferries him to and from work while holding back vast emotional reserves of her own.

“Licorice Pizza.” In Paul Thomas Anderson’s coming-of-age romance, a child performer who has hit maximum adolescent awkwardness is aging out of his professional niche. His encounter with 20-something Alana, whom he instantly falls for, gets the story’s juices going.

“Nightmare Alley.” A grifter with empty pockets and a mysterious past joins the sleazoid world of 1930s back-road carnivals. He soon begins cycling through women, including a clairvoyant whose husband once had a successful mentalist act.

“The Power of the Dog.” Phil Burbank has been playing cowboy his entire adult life, raising cattle on his family’s Montana ranch for decades. When his brother George marries a widow with a teenage son, a lifelong family dynamic is disrupted.

“West Side Story.” Steven Spielberg’s remake of one of Broadway’s most celebrated musicals — a modern take on “Romeo and Juliet” — centers on the forbidden love between Tony and Maria, who are involved with two rival street gangs in Manhattan’s West Side in the 1950s.

“It’s not credible that a young woman — particularly as attractive as Berry’s Leticia — would live in isolation without any Black community,” she said.

In a 2004 article published in Film Quarterly, Mask noted that the film, which is set in a Georgia town in the 1990s, is also problematic because of its voyeuristic attitude toward working-class women’s sexuality in the context of American race relations.

Berry said that she was aware of the criticism and that she would “absolutely” take the role today.

“I loved that character from the minute I read the script,” she said. “I thought the story was important, and it touched me. So if I read that today and felt that same way, which I think I would — absolutely.”

Berry said that while she certainly celebrated her milestone win, she was determined not to let it change the types of parts she took.

“You have to stay true to whatever got you to that place to get that award,” she said. “And, for me, it was taking risks and doing things outside the box.”

But, Berry emphasized, the fact that no African American has won the academy’s top acting award for women in the past two decades should not take anything away from women like Lena Waithe and Viola Davis, who are producing “miraculous, wonderful work.”

“We can’t always judge success or progress by how many awards we have,” she said. “Awards are the icing on the cake — they’re your peers saying you were exceptionally excellent this year — but does that mean that if we don’t get the exceptionally excellent nod, that we were not great, and we’re not successful, and we’re not changing the world with our art, and our opportunities aren’t growing?”

Even more important than the statuette in her bedroom, Berry said, is the work she’s been able to do in the years since. She recently directed her first film, the mixed martial arts drama “Bruised,” which began streaming on Netflix in November.

“Twenty years ago, a Black woman directing a movie about the fight genre?” she said. “I don’t think I could’ve even wrapped my brain around it. That’s proof to me that things are changing.”

Ruben Randall - February 22, 2022 0
TV/Movies
It was not a very fun day or two at the end of the workweek a few days ago.This past Thursday saw heavy, all-day...