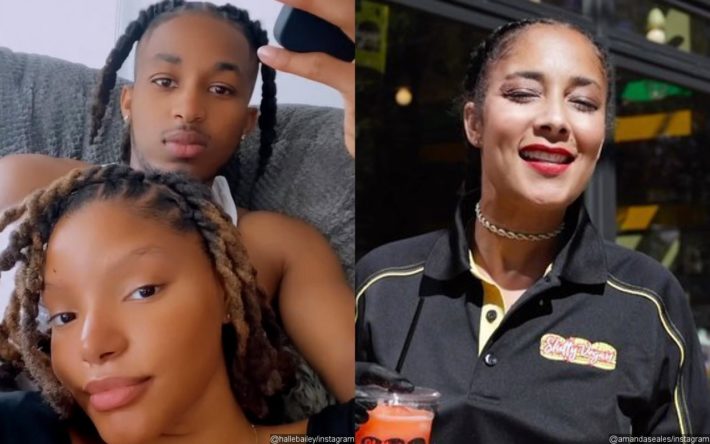 A YouTube personality and rapper who is dating The Little Mermaid actress Halle Bailey is speaking out after a comedian/actress took aim at him.

Darryl Dwayne Granberry Jr., a YouTube personality who goes by the moniker PontiacMadeDDG and/or DDG has responded to Insecure actor Amanda Seales‘ suggestion that Grown-ish actress Bailey should leave him.

In a Vlad TV interview, DDG was asked about Seales’ comment regarding Berry breaking up with him after he commented on the controversy of Bailey playing the title role of the upcoming feature film The Little Mermaid. DDG made headlines and received backlash after saying, “I didn’t know people was this racist. I didn’t know this was a thing, I thought this s**t was gone already. I thought Martin Luther King [Jr.] canceled that s**t out. This s**t is crazy.”

Seales wasn’t here for it and side-eyed that comment, suggesting Bailey distance herself from her boyfriend by breaking up with him.

“I thought that was lame,” DDG said about Seales’ comment. “I don’t even know who that is, and that’s not no disrespectful s**t, I genuinely do not know who that woman is.”

He did acknowledge how popular the social media post was.

“Hella engagement on that post though. I seen that b**ch. I’m like, ‘Ten thousand comments? F**k is this?’ How old is she? Why would you even be speaking on a young relationship like that?”

Still bewildered at her suggesting Bailey break up with him, he then asks, “How old is she? Why would you even be speaking on a young relationship like that?”

When the interviewer stated she was 41, he then quipped, “At your big age, that’s how you’re talking about a 24-year-old and 22-year-old dating?”

The whole thing started when the trailer for The Little Mermaid was released. Mostly white people complained publicly that, in essence, a white actress should be playing the fictional animated character. In response to the criticism, DDG responded with the Martin Luther King Jr. joke.

Based on that response, Seales responded, via her Instagram account by saying, “She might not get an STD, but she’s going to get STS- sexually transmitted stupidity.”

Ruben Randall - October 9, 2021 0
Money
Adele opened up about her reasons for moving to Los Angeles, California. She claimed that London property prices were too high.The singer, who...