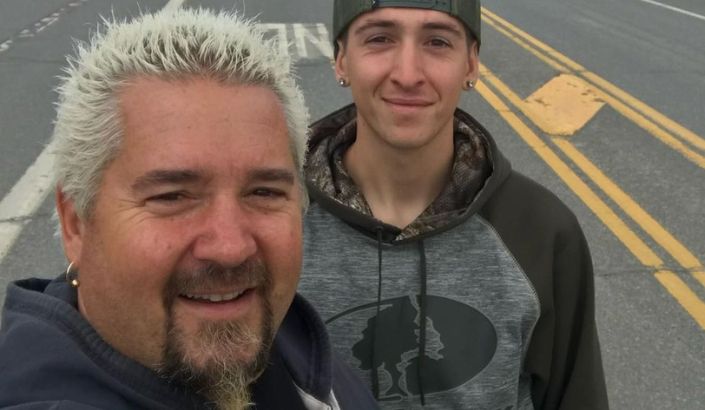 He’s one of the most famous restaurateurs out there, and given the success of the TV aspect of his career, there are times when it seems like he’s everywhere. Fieri’s food empire has allowed him to build wealth beyond his wildest imagination. As of 2022, Guy Fieri has a net worth of $50 million.

Fieri was actually born in Columbus, Ohio in 1968, but he grew up in Humboldt County, California. He immediately displayed a hunger for new experiences, the first of which was a desire to be a foreign exchange student.

But Fieri also had to finance the venture, so he started a food truck called Awesome Pretzels. Pretzels aren’t exactly haute cuisine, of course, but Fieri realized immediately that he’d found his passion in cooking and food.

Fieri went to France, and when he came back to California he dove head first into the restaurant industry, becoming district manager for a chain in SoCal.

It was only a matter of time before his own restaurants followed. The most prominent names were Tex Wasabi and Johnny Garlic, and their success was seminal to Fieri’s rise through the ranks of restaurateurs in the 90s and early 2000s.

New York beckoned, but Fieri’s first venture there was a failure. Guy’s American Kitchen and Bar were slammed by the New York Times shortly after it opened in 2012. The restaurant limped along for a few years until it finally closed in 2017.

But that didn’t stop Fieri. His business sense is nearly as keen as most of his food instincts, and he partnered up with the likes of Carnival Cruise lines and Planet Hollywood. Once again, not exactly haute cuisine, but they did allow Fieri to continue to open restaurants beyond the Big Apple and build his brand.

It was on TV that Fieri truly found his food-based calling. His unique look, which features bleached, spiked hair, a trademark bandanna and an intriguing array of facial hair and piercings, complemented his outrageous style.

His list of successful shows is lengthy to the point of being nearly endless. It includes The Next Food Network Star, Guy’s Big Bite, Diners, Drive-Ins and Dives, Dinner: Impossible, Minute to Win It, and on and on.

His approach to cooking is as bold as his look and persona. Fieri believes in tackling failure head-on and making mistakes are as essential to his approach as being adventurous.

He even co-owns a tequila company with Sammy Hagar, proving that there’s virtually no opportunity that Fieri isn’t willing to develop and exploit. Fieri also believes in chasing his passion, and as his New York experience proves, he simply doesn’t allow failure to get in the way.

As flamboyant as his TV persona is, Fieri’s private life is relatively quiet, which makes sense given how much traveling he does to his various venues. He married his wife, Lori, in 1995, and the couple has two sons. They live on a 450-acre ranch near Napa, and his biggest non-food hobby is collecting classic cars.