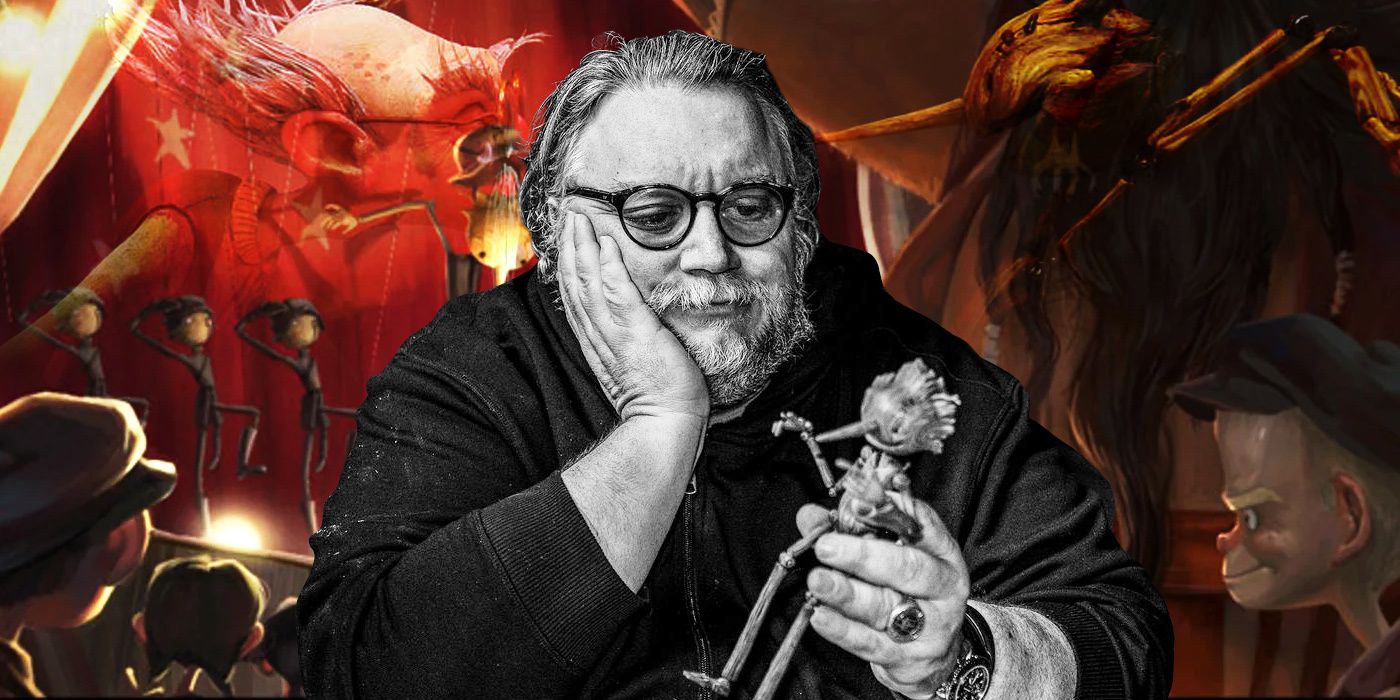 When Guillermo del Toro‘s name comes up in conversation, the discussion often revolves around his strange yet compelling filmography, from both of his Hellboy films to the noir trappings of Nightmare Alley. And while there is plenty to talk about in these films, including the ever-popular trope that the real monsters don’t often have fur or fangs, del Toro also has a collection of films that haven’t made it to the silver screen. Sometimes his busy schedule forced him to drop a project. Other times, another filmmaker would step in. And of course, there’s always the massive hurdles that any filmmaker has to get over when pitching a project. For every movie that eventually reaches the big screen, there are plenty of others that don’t.

Del Toro is a different case, as his list of unrealized projects literally has its own Wikipedia page. More to the point, a lot of them sound promising or were up his alley in terms of tone and genre – or even both. And while the Maestro of Monsters is still keeping busy with an animated version of Pinocchio and the Cabinet of Curiosities anthology both slated to hit Netflix later this year, fans will always wonder what could have been had he gotten these films off of the ground.

Perhaps the unmade del Toro film that haunts moviegoers’ imaginations the most is his third Hellboy film. Del Toro originally planned to work on it after he completed work on The Hobbit (more on that later), but soon became swamped with more projects. Fans continued to wait with bated breath until del Toro announced that the project was completely dead in 2017. As for the plot, del Toro revealed back in 2014 that he intended for the World’s Greatest Paranormal Investigator to face his fate as the being that would bring about the apocalypse: “He has to become the beast of the Apocalypse to be able to defend humanity, but at the same time, he becomes a much darker being.” A Hellboy reboot would debut in 2019, with David Harbour donning Hellboy’s horns and Right Hand of Doom and Neil Marshall stepping behind the camera. Del Toro would produce and co-write a pair of Hellboy animated films, both drawing heavily from the comics and featuring Ron Perlman reprising his role as Hellboy.

At The Mountains of Madness

Another major project that del Toro has been attached to over the years is an adaptation of H.P. Lovecraft’s At The Mountains of Madness. When it was first brought up in conversation, it sounded like a surefire catch. Not only was del Toro set to direct the film, but he also had the might of Terminator mastermind James Cameron as a producer and Tom Cruise attached as his leading man. Unfortunately, time was not on the director’s side as multiple delays led to everyone abandoning the project. There was also the matter of Cameron’s Prometheus, as del Toro confirmed that it shared the same twist ending that he intended to bring to Mountains.

Del Toro’s comic book films aren’t usually what one would expect from the genre. Instead of the usual caped and cowled antics, his heroes struggle with their inner demons as much as saving the world. And they have a definite horror bent: Blade II pitted Wesley Snipes‘ Daywalker against a new race of mutant vampires while the Hellboy films featured all manner of grotesque creatures. Therefore, it surprised no one on the planet when del Toro announced his involvement with a Justice League Dark movie or Dark Universe as it was known at the time. Keeping in line with the comic it was based on, Dark Universe would have featured the supernatural heroes of the DC Universe such as Swamp Thing, John Constantine, and Zatanna Zatara. But in 2015, del Toro departed the project alongside director Doug Liman, with Liman opting to helm Chaos Walking. The supernatural side of the DC Universe has now fallen into the hands of J.J. Abrams, who is planning a host of TV projects.

Perhaps the most perplexing project that del Toro has been attached to is the film adaptation of The Hobbit. Not only was he handpicked by Lord of the Rings director Peter Jackson, but del Toro also boarded the project while New Line Cinema and the Tolkien Estate were locked in a legal battle. Del Toro worked side-by-side with Jackson, co-writing the screenplays for The Hobbit as well as crafting a visual look that hewed closely to what Jackson had established with his Rings trilogy. But the project ran into major delays, which led del Toro to depart the film – albeit on good terms. “The blessings have been plenty, but the mounting pressures of conflicting schedules have overwhelmed the time slot originally allocated for the project,” he said during an official statement to theOneRing.net. “Both as a co-writer and as a director, I wish the production nothing but the very best of luck and I will be first in line to see the finished product. I remain an ally to it and its makers, present and future, and fully support a smooth transition to a new director.” That ‘new director’ would be none other than Jackson himself, who stepped back into Middle-Earth for all three Hobbit films.

RELATED: ‘Doctor Strange’: Neil Gaiman and Guillermo del Toro Once Pitched a Version of the Hero to Marvel

The Hobbit wasn’t the first time del Toro and Jackson worked together. Jackson was attached to produce a film adaptation of the Halo video game series, while del Toro was set to direct. However, del Toro left the project, and Neill Blomkamp took his place. Eventually, Halo would become a streaming series for Paramount+. In 2020, Halo environment artist Paul Russel revealed more about del Toro’s vision for the film – including one surprising deviation from the games. “Master Chief had a twin brother, and the twin brother sided with The Flood,” Russel told IGN. “Del Toro was pitching this to Joe at his house. He was punching Joe on the arm and going, ‘And they’re brothers! And they’re going to fight at the end!'”

Another project that sounded like it was right up del Toro’s alley was his planned adaptation of Disney’s Haunted Mansion ride. He wanted to make the film in 3D, as well as give it his signature horror flair. “We are not making it a comedy. We are making it scary and fun at the same time, but the scary will be scary,” del Toro said during a San Diego Comic-Con panel. Ryan Gosling was even slated to have a starring role in the film, and del Toro reached out to Disney Imagineer Jason Surrell (The Avengers) to design sets. However, Disney has chosen to take a new direction with The Haunted Mansion; Justin Simien (Dear White People) is now directing and Rosario Dawson is in the lead role.

Hellboy 3 and the Hellboy animated projects weren’t the only times del Toro returned to the world of the Dark Horse Comics icon. He was slated to produce a Hellboy spinoff titled Silverlance, which would have focused on the antagonist from Hellboy II: The Golden Army – Prince Nuada (Luke Goss). It would have also featured Abe Sapien (Doug Jones) in a lead role, as the amphibious B.P.R.D. member traced Nuada’s history and its surprising connection to Hellboy’s past. Surprisingly, when Universal felt that Hellboy 3 would be worth a shot, Silverlance ended up being shelved.

There probably isn’t a comic book character that fits del Toro’s sensibilities more than the Incredible Hulk. Bruce Banner’s eternal struggle with his gamma-powered, rage-fueled alter self has the same kind of roots that fueled del Toro’s Hellboy projects. Plus, the idea of one of the most beloved horror directors taking on a character that’s been compared to a werewolf sounds like a match made in heaven. Therefore, fans were elated when news came of del Toro developing a Hulk TV series for ABC. However, Mark Ruffalo‘s performance in The Avengers led to the project being shelved. Ironically, Ruffalo would end up in a television series, as he guest stars in the first two episodes of She-Hulk: Attorney at Law.

Del Toro has also been involved in video games, as Hellboy: The Science of Evil draws inspiration from his films and the Trollhunters animated series gave birth to a video game spinoff titled Defenders of Arcadia. He would join forces with Hideo Kojima to work on Silent Hills, which sent video game fans’ hearts aflutter. One of the most celebrated horror directors working on a fan-favorite horror video game series? Dream come true. The project ended up being canceled, and del Toro swore off video games as a result. “I have proven to be the albatross of video games,” he lamented. But ironically enough, del Toro would make an appearance in Kojima’s Death Stranding video game as Deadman.