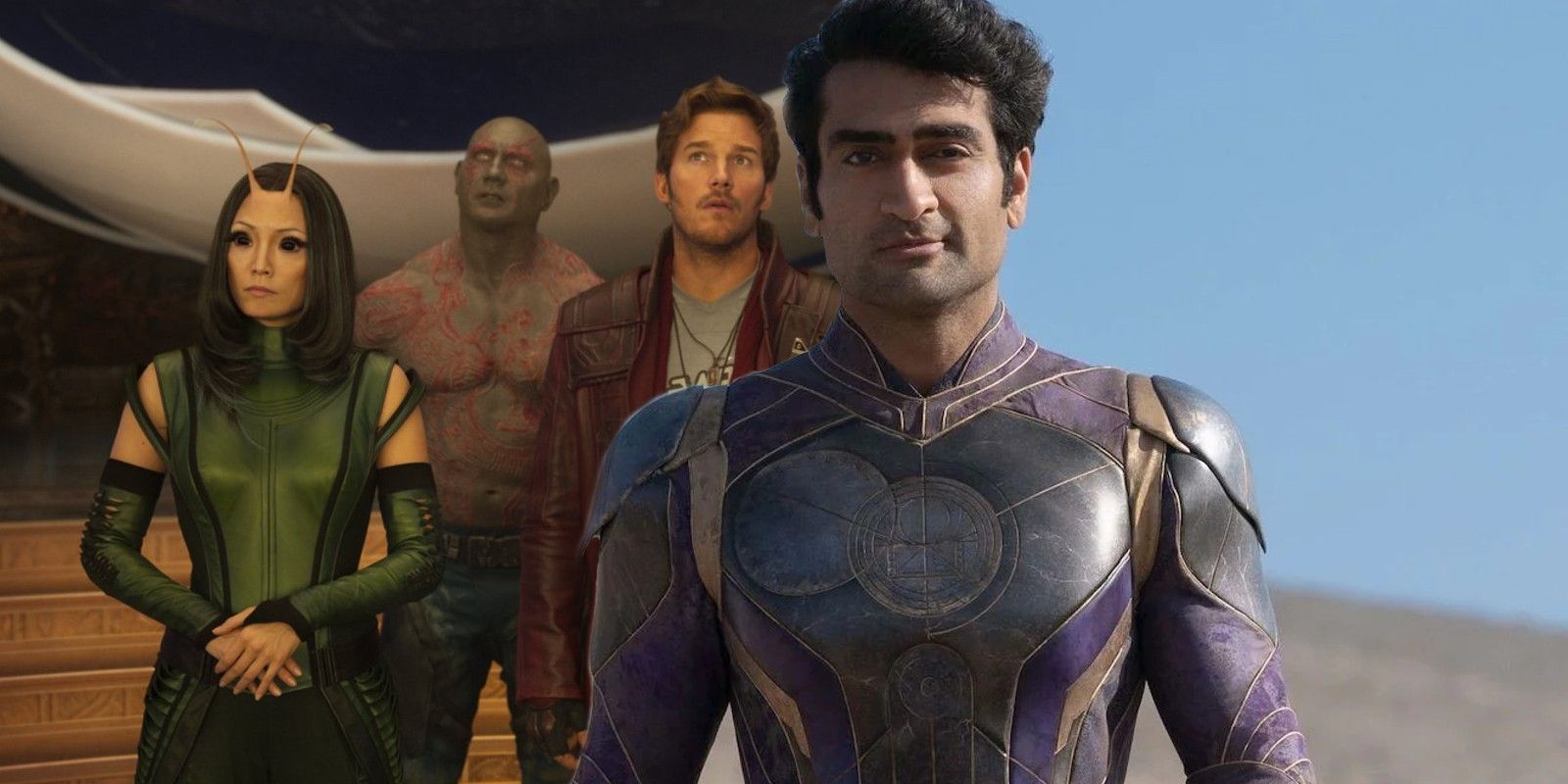 Photos seemingly taken from the set of the upcoming Guardians of the Galaxy Holiday Special reveal a special connection to Eternals’ Kingo.

The special will see the members of the main cast – Chris Pratt, Zoe Saldaña, Dave Bautista, Vin Diesel, Bradley Cooper, Karen Gillan, and Pom Klementieff – each reprise their respective roles from the Guardians of the Galaxy films. In a previous interview with Screen Rant, Gillan suggested that it was “totally possible” that the upcoming special was Gunn’s best work. Gunn himself would later side with his star, citing the project as a “true pleasure.” However, most plot details are still being kept under wraps, so it isn’t yet clear what the Guardians of the Galaxy Holiday Special will entail.

Now new photos from the set in Los Angeles hint at some connective tissue between the events of the Guardians of the Galaxy special and Eternals character Kingo (Kumail Nanjiani). Several keen-eyed fans have snapped photos and videos (via Dan and Alican) from outside the famous TCL Chinese Theater, and they show Mantis (Klementieff) and Drax (Bautista) in full costume. Making the scene even more interesting, Twitter user Patrick Dougall was quick to point out that the theater is displaying movie posters featuring Kingo, who is a Bollywood star in the MCU. Check out the posts below:

Guardians of the Galaxy: Holiday Special filming at the Chinese Theatre… there’s a bunch of Kingo posters from The Eternals! pic.twitter.com/vRuUFmGCKK

The TCL Chinese Theater is not a new location to be featured in the Marvel Cinematic Universe, as it made its previous MCU debut during 2013’s Iron Man 3. In that film, it served as the location for an Extremis explosion that injured Jon Favreau’s Happy Hogan. By all appearances, the theater’s new Marvel role in Guardians of the Galaxy seems far less dangerous, bedecked in Christmas decorations in keeping with the special’s holiday theme. The inclusion of Kingo’s movie posters are just one of the many rich in-universe details that the MCU has come to be known for over the years.

What is interesting, however, is the fact that at least some of the Guardians crew seemingly find themselves back on Earth after leaving the planet at the end of Avengers: Endgame. Gunn has previously been quick to point out that Star-Lord and the Guardians left Earth as quickly as they were able to, so it will be interesting to see if the events of the Guardians of the Galaxy special take place before their departure, or if they find their way back to Earth for whatever reason. Whatever the rationale may be, fans will get a chance to see Kingo’s Eternals Easter egg for themselves when the Guardians of the Galaxy Holiday Special airs in December.

Next: Why So Many People Dislike Chris Pratt & Want Star-Lord Recast


TC Phillips is a scribbler, mess maker, and storyteller by nature. He is also a publisher and an author of his own special brand of warped fiction, and he revels in delving headfirst into all things strange, bizarre, and fantastical. A self-proclaimed nerd of the highest order, the vibrational energy generated by his constant state of fanboy excitement should probably be harnessed to power a small city. When his pancreas is not screaming under the pressure of his dietary habits, he is constantly befuddled by his three children and amazed that his long-suffering wife has not yet taken it upon herself to murder him in his sleep. He Tweets at @T_C_Phillips