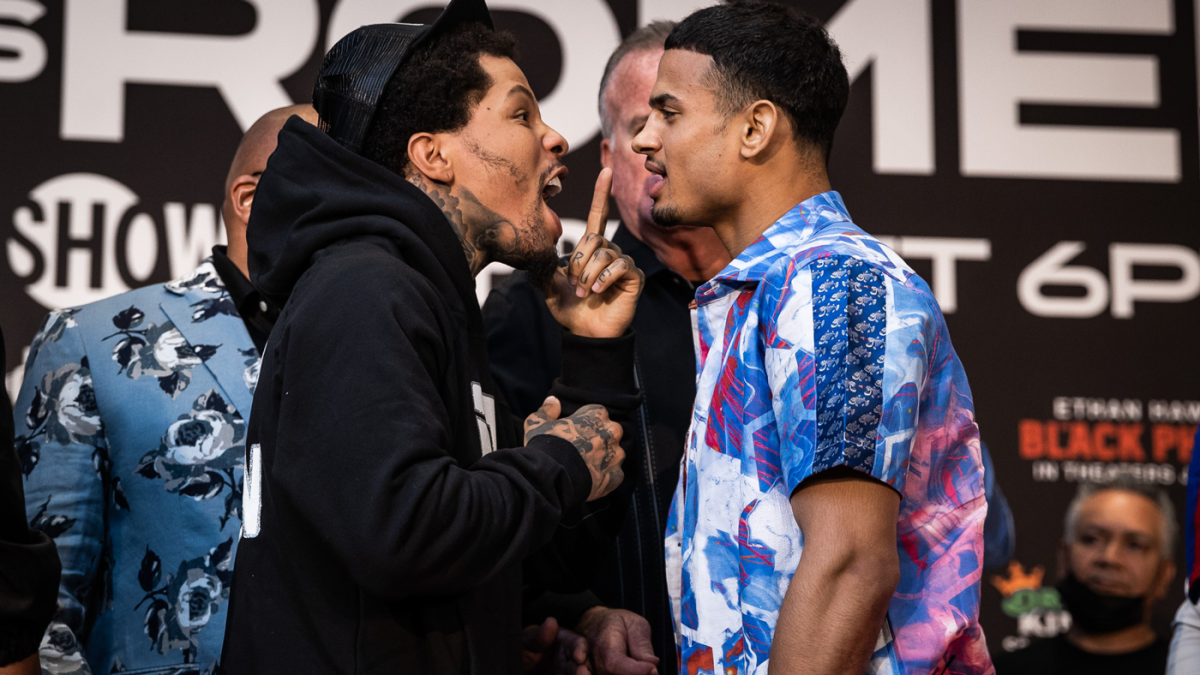 Confidence can be a fighter’s best friend or worst enemy. Rolando “Rolly” Romero hopes his sky-high confidence will be enough to propel him to a sport-shaking upset over Gervonta “Tank” Davis in their clash for the secondary WBA lightweight title on Saturday night inside the Barclays Center in Brooklyn (9 p.m. ET, Showtime PPV — order now).

Romero (14-0, 12 KO) has certainly talked the talk leading up to the fight, drawing on a history of bad blood to hype up the fight — and himself.

“Everybody talks about [whether I can outbox] Gervonta but he’s not even a good boxer,” Romero told “Morning Kombat” ahead of the fight. “Everybody outboxes him and everybody punches him in the face. It’s all smaller dudes and weight-drained opponents. And the one person that had a f—ing pulse when they fought was ‘Pitbull’ Cruz and [he] has no boxing ability, whatsoever. Yet, he beat the f— out of [Davis] and you’re talking to me about potentially outboxing Gervonta Davis? Shit.

“He has one of the most padded records I have ever seen and people don’t realize that.”

Davis (26-0, 24 KO) has emerged as one of the brightest stars in boxing over the past several years, showcasing a combination of speed and power that has been far too much for every man he has faced inside the ring.

Can’t get enough boxing and MMA? Get the latest in the world of combat sports from two of the best in the business. Subscribe to Morning Kombat with Luke Thomas and Brian Campbell for the best analysis and in-depth news, including a complete preview of Davis vs. Romero on Showtime PPV in Brooklyn below.

For all his talents, Davis’ power is his calling card. Only two men have ever been able to take Davis the distance. Davis had gone on a run of 16 consecutive knockouts that ended in his most recent fight, a narrow decision win over Cruz. During that run, Davis scored some of the biggest knockouts in the sport, including 2020’s Knockout of the Year, a crushing uppercut that put Leo Santa Cruz to sleep in what had been a very competitive fight.

“I just want to show people that there are different levels when it comes to boxing,” Davis said at the final press conference. “There are people that play boxing and there are people who have been doing this since they were kids. It’s time to show that I’m one of the guys who’s not to be played with. It starts with him and it’s going to continue.”

In the fight with Cruz, which Romero has pointed to as proof of Davis’ lack of true quality, Davis suffered a hand injury midway through the fight and had to battle through a hard-charging and determined opponent. That Davis was able to shift gears and battle through those two layers of adversity was a big moment that showed a deeper well of skills than many of Davis’ doubters may have believed he possessed.

Cruz actually stepped into the Davis fight late in the process, filling in for Romero after sexual assault allegations surfaced. While it was expected that Davis would move on from the fight with Cruz to target big-name fighters like Ryan Garcia, Devin Haney or undisputed lightweight king George Kambosos Jr., the bout with Romero was rebooked after no charges were filed against the 26-year-old when the allegations could not be substantiated.

Romero possesses plenty of his own power, having stopped 12 of his 14 opponents as a professional. His style is best described as “awkward,” which is boxing speak for lacking technical proficiency but with enough power to usually cover for those technical deficiencies.

The one fight where Romero was not able to do so came in his August 2020 fight with Jackson Marinez. Romero won the WBA interim title in that fight, but almost no one outside of Romero and the three ringside judges saw Romero as having deserved the win in a fight Marinez completely controlled.

While the WBA was considering a rematch between the two, the fight never materialized and Romero picked up a pair of seventh round knockout wins to set up a match with his rival.

The undercard fills out with three more bouts on PPV. Veterans Erislandy Lara and Gary “Spike” O’Sullivan are set to battle it out for the secondary WBA title at middleweight in the co-main event. Lara, 39, has won three in a row since a draw against Brian Castano and a loss to Jarrett Hurd in 2019 and 2018, respectively. O’Sullivan, 37, has won three of his last four with the lone loss coming by TKO to Jaime Munguia in January 2020.

Plus, Jesus Ramos is set to slug it out with Luke Santamaria in a junior middleweight contest. And Eduardo Ramirez battles Luis Melendez in a junior lightweight contest to open the PPV festivities. Let’s take a closer look at the odds from Caesars Sportsbook before getting to a prediction and pick on the main event below.

You can dig through the history of boxing and find cases of crude brawlers who were a top-class fighter’s kryptonite. Those fights tend to stick out in the memory far more because the much more common case of the better fighter simply outclassing their foe. Can Romero prove to be Ricardo Mayorga to Davis’ Vernon Forrest? It’s certainly possible but also highly unlikely.

For all of Romero’s talk of Davis getting outboxed and hit clean by every opponent, Romero leaves the bigger openings defensively. Romero swings for the fences with nearly every punch, winding up and leaving big holes for return fire while also often finding himself off-balance in the process. Davis is simply the far better fighter and his power is as good, if not better, than Romero’s. Outside of Romero catching Davis clean with a fight-changing punch, it’s hard to see any way the fight doesn’t play out with Davis hitting Romero clean early and often before finishing the fight with a brutal flurry. Pick: Davis via TKO4

Who wins Davis vs. Romero? And which prop is a must-back? Visit SportsLine now to see Brandon Wise’s best bets for Saturday, all from the CBS combat sports specialist who has crushed his boxing picks the last two years, and find out.

Ruben Randall - August 11, 2022 0
Actress
Sarah Levy showed her appreciation for her husband Graham Outerbridge with the sweetest photo of him and their baby James Eugene. On Wednesday, the...