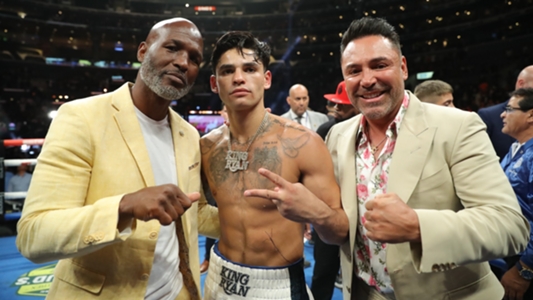 After a forgettable points win over Emmanuel Tagoe in April, Ryan Garcia needed a performance which would make a statement to the boxing fans.

On Saturday night he did exactly that, dropping former world champion Javier Fortuna three times at the Crypto.com Arena in a sixth round stoppage win on DAZN.

During the post-fight aftermath, Garcia was quick to call out the likes of Gervonta “Tank” Davis and former unified lightweight champion Teofimo Lopez. A fight between either man would be a huge occasion.

DAZN looks at the options Garcia could pursue for his next fight.

Ryan Garcia has made no secret he wants to face Gervonta “Tank” Davis.

He was the first name out of Garcia’s mouth following his win over Fortuna continuing what has been a long running feud between the pair. Davis was quick to respond to the 23-year-old’s challenge on social media and now he’s a free agent, a fight between the pair could be closer than ever.

This would be a huge fight for the careers of both men. The build-up will certainly be one to remember as Garcia and Davis are not afraid to speak their mind, and inside the ring it will be two fighters who will not be afraid to let their hands go in what would be an all-out war.

Lopez is set to fight for the first time since his loss to George Kambosos Jr. last November when he faces Pedro Campa in Las Vegas next month at super lightweight.

With Garcia now claiming that he will fight at 140lbs for the foreseeable future, a clash with Lopez could be on the cards. The only stumbling block however will be if Garcia’s promoter Golden Boy and Top Rank who are in charge of Lopez can strike a deal, and all boxing fans know that politics can often get in the way when it comes to making the big fights happen.

When Ryan Garcia stopped Luke Campbell in January 2021, he was linked with a fight against WBC lightweight champion Devin Haney in what would have been a huge fight between two of boxing’s youngest stars.

Since then, a lot has changed.

Garcia is coming back from a year long layoff following mental health and injury issues, while Haney has become the undisputed lightweight champion after beating George Kambosos Jr. last month.

One name which isn’t getting mentioned is unified super lightweight champion Josh Taylor.

Taylor is currently looking to finalise a rematch with Jack Catterall, but following this fight, the Scot’s future at 140lbs is uncertain. A move to welterweight is a possibility for Taylor, but only if he can secure date with a big name, therefore a fight with Garcia who has a huge following maybe enough to convince Taylor to stay at super lightweight in what would be a major trans-Atlantic event.